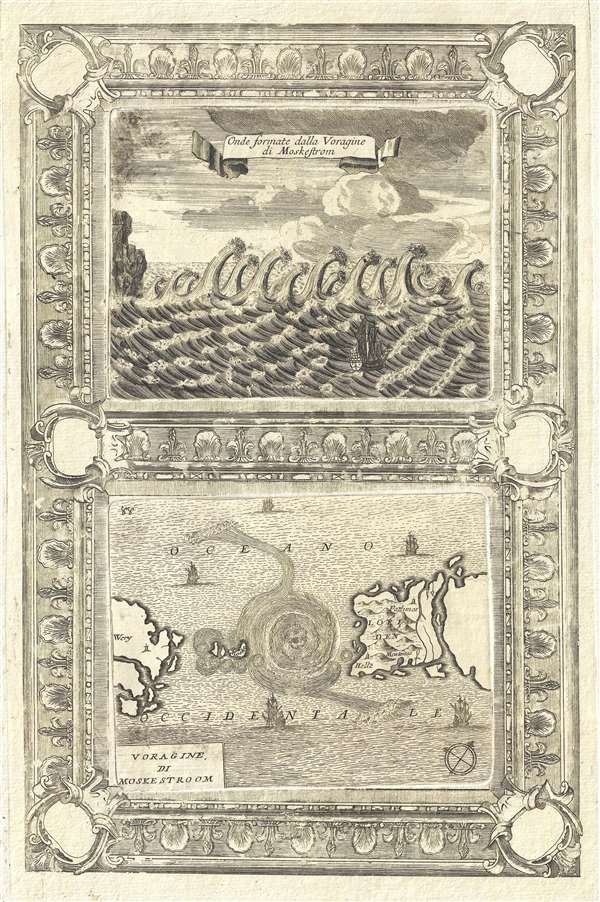 Spectualry image and map of the Lofoten Maelstrom or Moskenstraumen!

An uncommon page from Vincenzo Coronelli's Isolario dell' Atlante Veneto illustrating the remarkable phenomena of Norway's Lofoten Maelstrom or, the Moskenstraumen. By far the world's most famous whirlpool, the Lofoten Maelstrom is a system of tidal eddies and whirlpools, one of the strongest in the world, that forms at the Lofoten archipelago, Norway, in the Norwegian Sea. The Lofoten Maelstrom became a popular subject for artists and writers, including Edgar Allan Poe, Walter Moers and Jules Verne. Poe's description, from Descent into the Maelstrom, is perhaps the most famous,

a circle of more than a mile in diameter. The edge of the whirl was represented by a broad belt of gleaming spray ; but no particle of this slipped into the mouth of the terrific funnel, whose interior, as far as the eye could fathom it, was a smooth, shining, and jet-black wall of water, inclined to the horizon at an angle of some forty-five degrees, speeding dizzily round and round with a swaying and sweltering motion, and sending forth to the winds an appalling voice, half shriek, half roar, such as not even the mighty cataract of Niagara ever lifts up in its agony to Heaven.

The present offering is one of the finest cartographic representations of the Lofoten Maelstrom ever published. Tipped into Coronelli's Isolario dell' Atlante Veneto, considered among the greatest atlases ever published, the Maelstrom is considered both in map form and as seen from a ship at sea. The illustrations are in fact more akin to Poe's fictionalized account than any factual representation of the maelstrom. The upper image shows great wave, of such magnitude that they dwarf the tall ship sailing towards them. The lower image shoes the Maelstrom from above, illustrating the ocean currents taking on the form of a massive singular whirlpool. The image is framed by a dramatic fleur-de-lis and scallop shell surround.