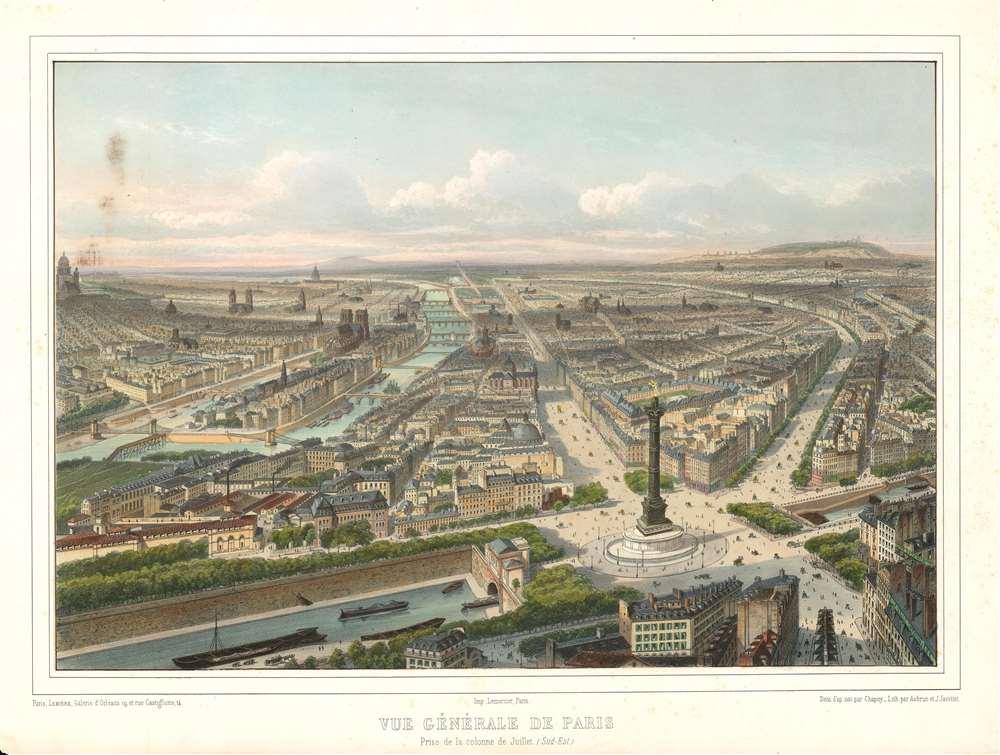 llustrates Notre Dame, the Louvre, the Pantheon, and the bridges of the Seine among other Paris landmarks.
$750.00

This is a c. 1845 Nicolas Chapuy view of Paris. The view looks west over the City of Light with the Place de la Bastille and the Colonne de Juillet in the foreground. The Canal Saint Martin crosses beneath the Place de la Bastille in the foreground, with the Rue Saint-Antoine and the Boulevard Beaumarchais leading away from the column. The Place des Vosges, the square of houses surrounding a park, can be seen just behind the Colonne de Juillet and was the first planned square in Paris. Further along the Rue Saint-Antoine, the Église Saint-Gervais is illustrated, just across the Seine from Notre Dame. The Louvre and the Tuileries Gardens are also discernable, as are Les Invalides and the Panthéon (along the left border). Numerous other churches are included throughout Paris. The bridges of the Seine are beautifully illustrated. In the distance, practically on the horizon, the recently completed Arc de Triomphe is visible, but only just.

This view was drawn by Nicolas Chapuy, lithographed by Aubrun and Jacottet, and printed by the Lemercier firm. It was published by Lemière c. 1845.

Nicolas-Marie-Joseph Chapuy (1790 - July 23, 1858) was a French lithographer who specialized in works depicting monuments. Born in Paris, Chapuy attended the prestigious École polytechnique with designs of being a marine engineer. However, when his Bonapartist views came to light, he never received a posting. A fortuitous meeting with Théodore de Jolimont (February 8, 1787 - October 27, 1854) led Chapuy to a job as Jolimont's assistant on a series named French Cathedrals Drawn As They Are (Cathédrales françaises dessinées d'après nature). This project would become a lifelong endeavor for Chapuy, one that he pursued with Jolimont, on his own, and with his own students. Chapuy was known not only for his lithographs of cathedrals, but monuments in Paris and all over France. Chapuy died in Paris on July 23, 1858. Learn More...