1855 U.S. Coast Survey Chart or Map of Washington and Oregon 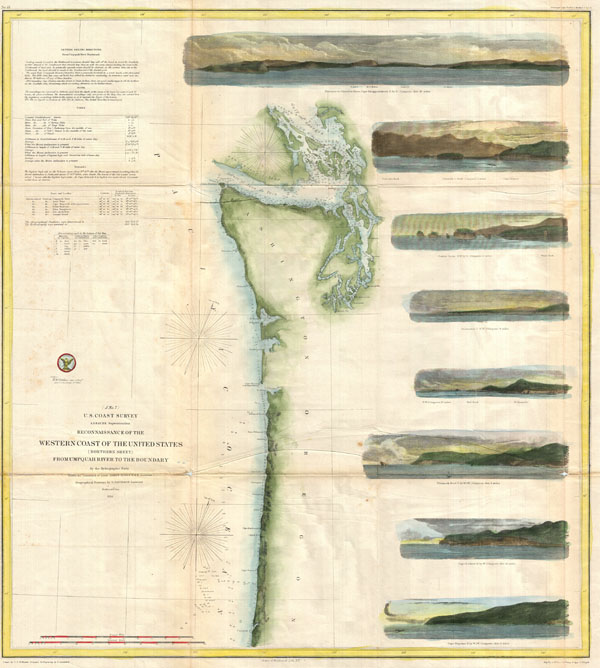 1855 U.S. Coast Survey Chart or Map of Washington and Oregon

One of the U.S. Coast Survey's most decorative maps.

One of the U.S. Coast Survey's most attractive productions, this is a rare hand colored 1855 chart of the coastline of the Pacific Northwest, including the modern day states of Washington and Oregon. The map extends from the Oregon-California border northward to Vancouver Island and the Straits of Juan de Fuca. Features eight coastal views, from bottom: 'Cape Perpetua N. by w. ½ W,' 'Cape Lookout N. by W.,' Tillamook Head N. by W. ½ W.,' 'Sail Rock,' 'Destruction Island N. W.,' 'Flattery Rocks N.W. by N.,' 'Tatoosh I. North,' and 'Entrance to Columbia River, Cape Disappointment E. by N.' Features depth soundings all along the coast with various points, harbors, and lookouts well noted. Of particular interest is the detailed rendering of the Puget Sound, where Steilacoom, Olympia, and Seattle are all identified. The upper left quadrant features tidal notations and sailing instructions. The hydrography of this region was accomplished by James Alden. The geography is the work of G. Davidson. Published under the supervision of A. D. Bache for the 1855 Report of the Superintendant of the U.S. Coast Survey.

Realms of Gold: A Catalogue of Maps in the Library of the American Philsosphical Society. Part II: Printed Maps - Mountain and Western States, 696: 1855: Un38urb Large. NOAA Historic Coast & Geodetic Survey (C&GS) Collection , cgs05151.
Looking for a high-resolution scan of this?