1855 Colton Map of Washginton D.C. and the Chesapeake Bay Region 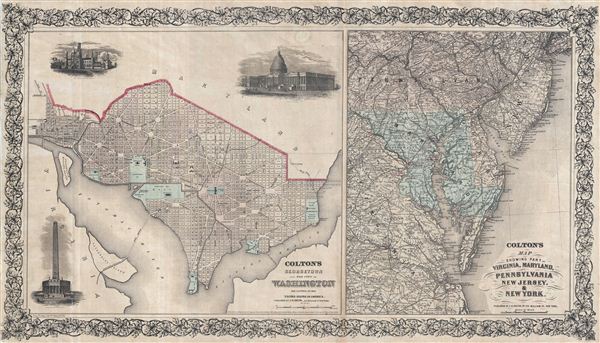 1855 Colton Map of Washginton D.C. and the Chesapeake Bay Region

One of only four known examples.

A highly unusual discovery, this is an independently issued c. 1862 map of Washington D.C. and the Chesapeake Bay area by the American cartographer J. H. Colton. Our research has only been able to identify three known examples of this map, two in the Library of Congress and one in the collections of Stanford University. Most known examples are found in the papers associated with important 19th century political figures. Curiously, this map is that it is clearly a composite, printed on two sheets and then joined with a unifying and elaborate decorative border by the publisher. Moreover, the map is backed on linen, printed on mid-weight paper, and shows no signs of folding. This approach itself is unusual, suggesting an exceptionally small run – possibly a prototype map or a map made at the request of a few potent political figures. The engraver, whose name is attached to the map as a whole is Lang & Liang, of 117 Fulton Street, New York. The Lang & Liang firm is associated with several military themed Colton maps issued in New York in 1862, at the height of the American Civil War. Though the map is dated 1855, the use of Lang & Liang, as well as the subject matter – which focuses on the Sea of the Civil War between Richmond and Washington D.C. – confidently suggests it must have been published in 1862.

essentially two maps in one, the left most map details Washington D.C. at the street level and corresponds with Colton's atlas work dating from 1855. Covers the city in incredible detail from Georgetown (Georgetown University, then College, shown) in the upper left quadrant to Alexander's Island in the south and as far east as Magazine Warf. Hand colored in pink, green, yellow and blue pastels with considerable detail at the level of individual streets and buildings. The map as a whole reflects Pierre L'enfant's brilliant city design, showing the iconic grid and ray street layout. Individual buildings such as the Smithsonian, the White House, the Capitol, the Arsenal, Penitentiary, Naval Yard, Poor House, Asylum, and Post office are all indicated. Features three inset engravings: The Smithsonian Institution, the Capitol, and a preliminary plan for the Washington Monument. Dated and copyrighted to J. H. Colton, 1855.

The right hand map focuses on the Seat of the Civil War, centered on the Chesapeake Bay and the disputed corridor between the warring capitals of Richmond and Washington D.C. While the attached Washington D.C. plan is clearly drawn from Colton's atlas maps of the period, this regional map does not correspond to any of Colton's Atlas maps. It is most likely a fragment derived from one of Colton's wall maps, or possibly from his New Topographical Map of the States of Virginia, Maryland, and Delaware, which covers a similar area, on a similar scale, and was also engraved by Lang and Liang in the same year, 1862. On this map the sites of important cities contested during the Civil War, including Washington D.C., Richmond, Baltimore, Annapolis, and Harper's Ferry are underlined in red.

All in all a fine map and a unique opportunity to own an extremely rare Civil War publication.