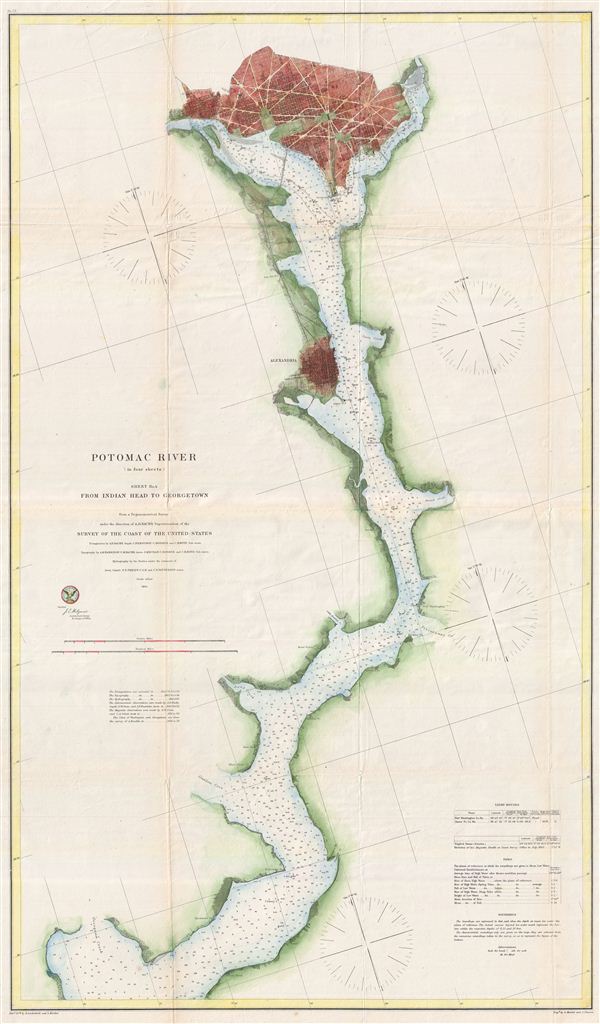 Offers a fascinating snapshot of the nation's capital during the American Civil War. Shows the city in considerable detail with streets and important buildings noted. Identifies numerous important buildings including the Capitol, the Smithsonian Institution, the White House (not yet called the White House), the Washington Monument, the National Observatory, the Navel Yard, the Poor House, the City Hall, and others. The city's famous grid and ray structure appear according to L'enfant's brilliant plan. Georgetown appears as a separate entity in the upper left corner with Georgetown College noted just outside the city border.

This map further features countless depth soundings throughout and limited inland detail. The map notes various estuaries, creeks, and lesser rivers branching off the Potomac. The scale is 1:40,000. Technically this map is part of a four sheet series detailing the Potomac as far as the Chesapeake Bay, however, the other three charts are designed to join, while this is a standalone panel drawn on a different scale with a different orientation. The three charts detailing the southern portion of the Potomac River are currently being offered separately on this website. The triangulation for this chart was accomplished by A. D. Bache, C> Ferguson, C. Hosmer, and C. H. Boyd. The Topography is the work of A. M Harrison, C. B. Bache, J. Mechan, C. Hosmer and C. H. Boyd. The Hydrography was completed under the command of T.S. Phelps and C. P. Patterson. The whole was compiled under the exacting direction of A. D. Bache, Superintendent of the Coast Survey.

Report of the Superintendent of the United States Coast Survey, Washington, 1864.