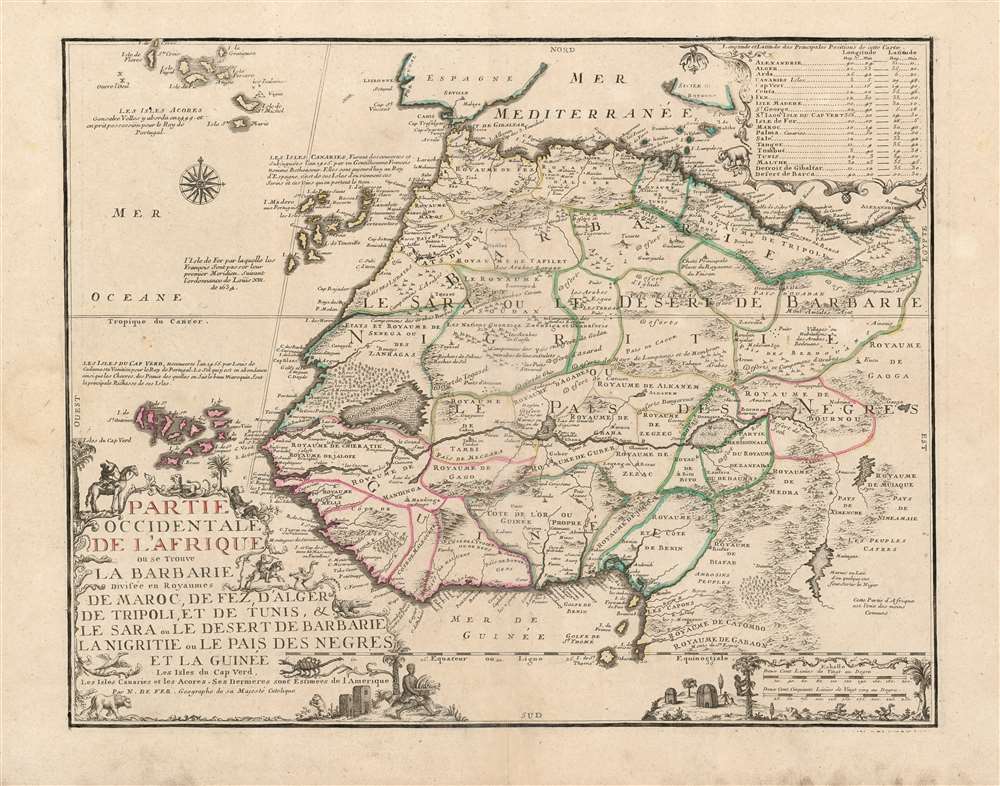 This beautifully engraved and rare map is Nicolas De Fer's c. 1709 map of the western part of Africa, with a specific and early focus on the region of Senegal. Senegal was the focus France's main effort at colonization in Africa. Despite those efforts having begun in the mid-seventeenth century, they were astonishingly not captured in cartographic form before 1707. No continental map of Africa prior to that point is so revealing of France's interests in Africa: her efforts to enter the international slave trade, and as well to identify and corner the world's supply of gum arabic.

De Fer's work presents a traditional division of Western Africa, extending from the Azores in the northwest down to the Equator, and from the Cape Verde Island in the west reaching eastwards as far as Alexandria. Thus, the map presents the Barbary Coast, the Kingdoms of Fez, Tunis, and Tripoli, Senegal, and the Guinea coast, including the Gulf of Guinea and the Bight of Benin. The interior is dominated by the great Sahara desert - here Le Sara ou le Desert De Barbarie, depicted in greater detail than in most prior maps, describing the region as the Kindgom of Biledulgerid.

Shining a Light on the African Interior

The entirety of this map lying between Barbarie and the River Niger shows evidence of fresh, detailed geographical and sociological information. This band of desert is broken into Arab kingdoms not shown on earlier works, and moreover depicts a multiplicity of Arab encampments and the presence of wells allowing Arab traders to span the great desert. At the mouth of the Senegal River can be seen the Isle of St. Louis, the site of France's colonial capital of Senegal. In Senegal, north of the river, is shown a large forest of gum acacia - 'Bois a Gome' bordered by a great Desert Marecageux, or 'Swampy Desert.' The acacia was / is harvested for gum arabic all along the southern littoral of the Sahara (much today comes from the Sudan). In the seventeenth century, gum arabic would be traded westwards to coastal entrepots like St. Louis. Despite the French having been active in Senegal since the 1670s, the only other contemporaneous map we have identified to contain these details is Guillaume De l'Isle's 1707 Carte de la Barbarie de la Nigritie et de la Guinee. Similarities in the content (particularly with respect to the new Senegal matter) suggest one must have been copied from the other, or that they share the same source. No other contender, barring the second 1707 state of De l'Isle's continental map of Africa. Interestingly, the 1700 first state of the De l'Isle Africa lacks this content. This the new data apparent here must have come to French Royal geographers after 1700. None of Coronelli's superb maps contain these details, and yet he enjoyed intimate connections with French sources. The new information appearing on the present map and those of De l'Isle appears to come out of nowhere - but we have suspicions.

The descriptive notes on De Fer's map agree with, but are less verbose than those on De l'Isle's Carte de la Barbarie. These descriptions closely match those that appear in the translated accounts of the French Hugenot traveler, commercial agent, and slave trader Jean Barbot (1655 - 1712). The two voyages forming the basis of Barbot's account took place between 1678 and 1682, but his work was interrupted by French persecution of Hugenots, forcing Barbot to flee to London in 1685. He completed his manuscript in England in 1688 but was unable to find a publisher in France. He was still revising a translation when he died in 1712, and it would not see print for another twenty years. While it is unlikely that Barbot ever returned to France - or for either De Fer or De l'Isle traveled to London - some corespondence between them seems to have existed. The knowledge did not spread vigorously. Even after the publication of De l'Isle's authoritative maps, most would exhibit the geographical information of the mid-seventeenth century until well into the eighteenth.

De Fer's inclusion of the Isle de S. Louis at the mouth of the Senegal River does nothing to correct one of the map's major canards - one shared with virtually every map of the continent going back to the mid-sixteenth century. Both the Senegal and the Gambia River are shown to flow from the Niger, the massive river depicted flowing from the east to the west, with its source deep in central Africa. In reality, it flows from western Africa to the northeast before turning south and emptying into the Gulf of Guinea. Despite this error, some truthful elements do emerge. In this case, the presence on the Niger River of the Niger Inland Delta. In the maps of Sanson, Nolin, Coronelli, Jaillot, and Danckerts, and indeed de l'Isle, the Niger River is shown to split and then rejoin just west of central Africa in the region labeled 'Zanfara,' forming a large island. De Fer's map fills in this space, indicating the presence there of a lake or marshland, 'Marais du Nub', corresponding approximately with the Inland Delta. The Niger River also includes a great lake, called Lac de Guarde or Lac de Sigismes formed by the Niger - which may also be an attempt to map the Inland Delta. Neither De Fer nor De l'Isle's maps attempt to connect the Niger to the Nile, an impossibility nevertheless presented on many maps of the 17th century.

A Question of Precedence

De Fer's map, like much of his output, appears to have been published both separately and in his bound atlas - which was remarkably fluid in its content over the course of its print history. We find examples catalogued variously with dates attributed as early as 1700 and as (credibly) late as 1728. We have identified only one state of the map, and it is undated. De Fer's imprint on the map, identifying him as Geographe de sa Magesté Catolique, is consistent with other maps of his oeuvre dated between 1705 and 1720. It is possible that this map pre-dates or is contemporaneous with Guillaume de l'Isle's 1707 maps.

We do not know the engraver for this work. De Fer's engravers included Van Loon and Starckman, but no engraver's mark is here evident. Stylistically De Fer's maps were of a very consistent aesthetic and quality. This work features a very grand cartouche with depictions of palm trees, gum acacia, and Africans - one with a box full of ivory tusks, one smoking a pipe, another clambering up a tree. A bow-wielding Bedou rides a camel, while another on horseback with a spear chases an ostrich. (This coincides with a similar scene appearing on the De l'Isle. Did Barbot discuss ostrich spearhunting? Or did one mapmaker copy the theme from the other?) Other fauna decorating the map include lions, crocodiles, a monkey, and a scorpion.

While it is possible that it was engraved earlier, we will adhere to Pastoreau's assessment that this map was produced for inclusion in De Fer's Atlas ou recueil de cartes geographiques, whose publication began in 1709. The content of this atlas varies wildly from copy to copy and indeed, we have not seen an example of the book actually containing this map, despite it having appeared among the advertised content of the work. We see only five examples of the separate map catalogued in OCLC which are part of the collections at the British Library, the Bibliotheque Nationale de France, the Sachsische Landesbibliothek, the University of Strasbourg, and the Musee National D'Histoire Naturelle. The map is extremely rare on the market: we are aware of one other copy having appeared in dealers' offerings in the past thirty years.