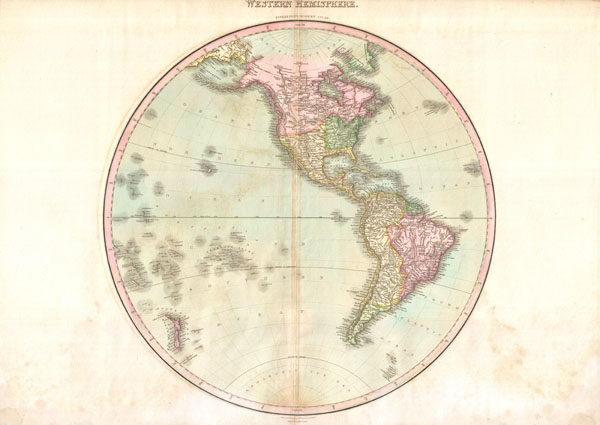 A rare and important 1818 map of the Western Hemisphere by John Pinkerton. Depicts North America, Central America and South America as well as parts of Polynesia, Siberia and Greenland.

In North America, thanks primarily to the work of Cook in the Pacific Northwest the coasts are rendered with considerable accuracy. The interior of North America, particularly the American West, is still rather vague, though much of the cartography is clearly derived from Humboldt's explorations. Notes the conjectural Lake Timpanagos, often associated with indigenous reports of the Great Salt Lake. The United States, still quite small, does not yet include Florida, Louisiana, California or Texas.

South America exhibits its typical clear outline and speculative interior. Pinkerton resurrects the idea of Lake Parima in Guyana - supposed site of El Dorado - which had all but disappeared from most other early 19th century maps. On the other hand, Pinkerton has dropped the Apocryphal Laguna de Xarayes, commonly located at the northern extremis of the Paraguay or Parma River. However, he does note several supposed gold mines deep in the Amazon, which may or may not reflect indigenous legends of El Dorado.