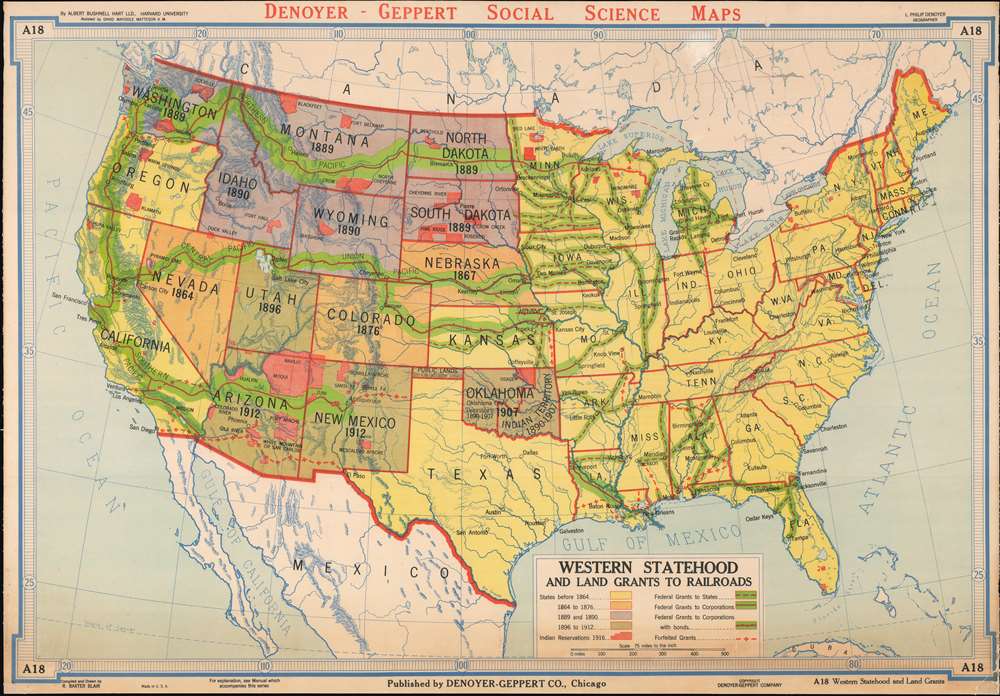 The growth of the United States explained.

This is a c. 1940s Albert Bushnell Hart and Denoyer-Geppert Company wall map of the United States. The map depicts the continental United States from the Pacific Ocean to the Atlantic Ocean and from Canada to Mexico. As a means of illustrating the westward expansion of the United States, color coding is used to differentiate between states. Through this unique coding structure, the piecemeal expansion of the United States across the continent is easily distinguishable. For example, all the yellow states achieved statehood before 1864, which means that both California and Oregon, on the Pacific coast, became states long before the majority of the states in the Trans-Mississippi West. American Indian reservations established by 1916 are depicted in red.

The construction of a trans-continental railroad was one of the core factors contributing to the growth of the United States. Several different grant systems were established to help foster railroad development. The Northern Pacific, Central Pacific, Union Pacific, and Southern Pacific lines are labeled with the means by which they received grants noted. Forfeited grants are also included.

This map was created by Albert Bushnell Hart with L. Philip Denoyer serving as geographer. The map was compiled and drawn by R. Baxter Blair and published by the Denoyer-Geppert Company of Chicago. It is number A18 in the Denoyer-Geppert Social Science map series. We have dated this map as c. 1940s due to the paper it is printed on. Several different editions of this map were printed, which allows for the possibility that this particular example could date from an earlier or later year.