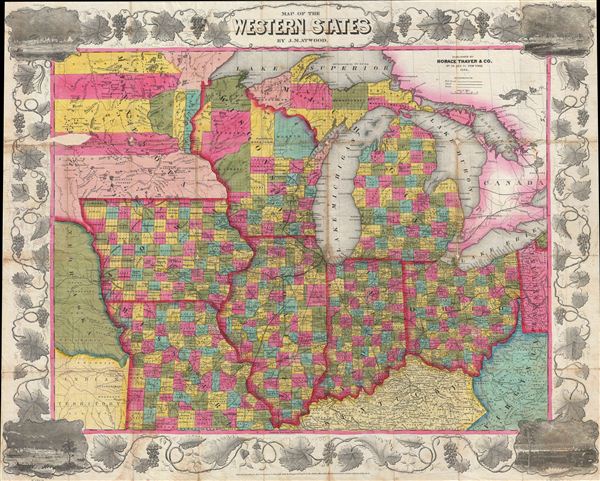 An attractive example of Thayer's 1853 map of the Western States. Centered on Lake Michigan, Thayer's map covers the states of Ohio, Michigan, Indiana, Illinois, Wisconsin, Iowa, and Missouri, with portions of adjacent Minnesota, Kentucky, Virginia, Pennsylvania, Nebraska, and the Indian Territory. The Great Lakes are well represented with Lake Michigan, Lake Huron, and Lake erie appearing in full, while Lake Ontario and Lake Superior are depicted only partially. excellent detail is offered throughout with counties being identified by color coding and roads, towns, rail lines, and canals noted. The map is surrounded by an appealing grape vine border with corner vignettes illustrating, clockwise from top left, Chicago, Detroit, Cincinnati, and St. Louis.

Traveler's guides, like this map, became indispensable tools in the American Westward expansion. Such maps, and their accompanying guides, were designed to help new immigrants find their way to the free lands in the west. Though by the time this map was issued, the population boost following the 1849 Gold Rush had turned California into a state, most of the lands in-between were little known, sparkly populated, and dominated great buffalo herds, and American Indian Nations - many of which are noted here in the lads to the west of the Missouri River. In the meantime the Missouri Compromise and associated border conflicts in this region were increasingly dividing the country over the issues of Slavery and Federal vs. State sovereignty.

This map first appeared in 1848 to accompany ensign and Thayer's Traveler's Guide, and was updated regularly through the 1850s. Accompanied by original leather bound guidebook and binder.

John M. Atwood (1817 - October 12, 1884) was an American engraver based in Philadelphia and New York City during the middle part of the 19th century. Atwood was born in Georgetown, near Washington D.C. Little is known of Atwood's life but most of his work was completed in conjunction with the publishing firms of Horace Thayer and J. H. Colton. A review of Atwood's work suggests that he was a highly accomplished, stylistically distinct, and detail oriented engraver. Colton seems to have turned to Atwood to engrave some of his most important as well as decorative maps. His most influential map is most likely the 1856 De Cordova pocket map of Texas, however, he also engraved the Colton's well known and highly decorative Thirty Three Miles Around New York and Colton's important 1849 Map of the United States. Learn More...

Good condition. Map in generally in excellent condition, however, it does suffer from typical wear along the original fold lines. This map further suffers from a small area of loss in western Minnesota - see image. The map has been flattened and backed with archival Japanese tissue for stability.

Howes, W., U.S.iana (1650-1950): A Selective Bibliography in which are Described 11,620 Uncommon and Siginficant Books Relating to the Continental Portion of the United States, E165.
Looking for a high-resolution scan of this?