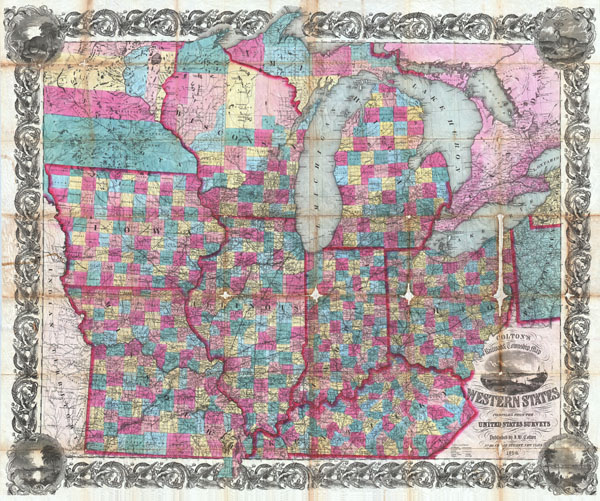 An extremely attractive example of Colton's 1854 pocket map format railroad and township map of the Western States. Covers the states of Ohio, Kentucky, Illinois, Indiana, Missouri Iowa Michigan and Wisconsin with parts of Minnesota and Pennsylvania. Offers extraordinary detail with color coding to the county level. The eastern and southern parts of the map are well developed, but the northern and western territories, particularly northern Michigan, the Indian Territory, and Minnesota remain largely undeveloped. Notates railroads, towns, rivers, canals, geographical features and roadways. Also mentions several of the American Indian nations in the Indian Territory to the west of Missouri and in Minnesota territory. The Great Lakes, Eire, Huron, and Michigan are shown in full. Surrounded by a magnificent wide floral border showing vines, flowers and leaves. Each corner of the border hosts a medallion: the upper left medallion depicts a buffalo, the upper right a stag, the lower left medallion has a view of St. Louis, Missouri and the lower right a view of Louisville, Kentucky. Exhibits some restorations – see condition notes – however, is one of the brightest and most beautiful examples of this map we have come across.