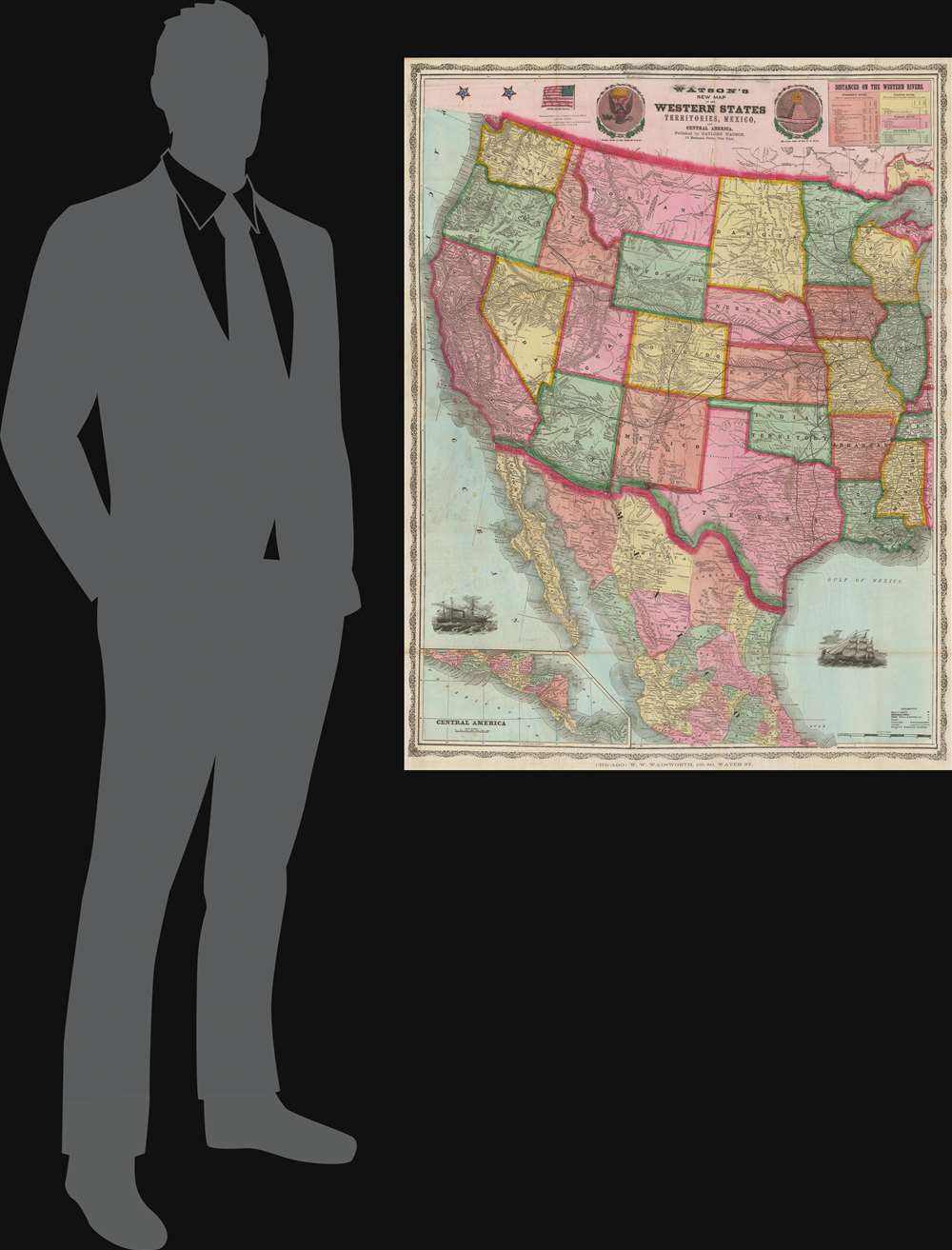 One of the earliest maps to illustrate Wyoming as a territory.

A visually striking large format 1869 map of the western United States by the New York map publisher Gaylord Watson. The map covers form Illinois and Mississippi to the Pacific. It offers a detailed breakdown of the transcontinental railroad system shortly after the driving of the Golden Spike on May 10, 1869, at Promontory Summit, Utah Territory. This is also one of the earliest maps to illustrate Wyoming after its official designation as a territory in 1868. To the left and right of the title are front and back illustrations of the Great Seal of the United States. In the upper right is a chart illustrating navigable mileage on western rivers, including the Mississippi, Illinois, Wabash, and Arkansas.

This map was published by Watson in New York. It appears to have been derived from an earlier United States wall map issued by Watson in 1867. The present example is nonetheless the first and only edition of the map thus. A note at the bottom adds a Chicago imprint of W. W. Wadsworth, 135 South Water Street. This is possibly a local agent representing Watson's work in Chicago. Very scarce to the market.

Gaylord Watson (September 23, 1833 - October 10, 1896) was an American map publisher and engraver based in New York City. Watson briefly partnered with his uncle Humphrey Phelps as Phelps and Watson (1859 - January 1, 1865) with offices at 16 Beekman Street, New York. After 1864 he established his own imprint, now at 61 Beekman. Watson focused on highly decorative emigrant guides, wall maps, and railroad maps. Around 1871 Watson established a branch office in Chicago under the management of D. Needham at no. 66 Lake Street. In 1881 a fire destroyed Watson's offices at 61 Beekman Street, pushing him into deep financial stress. A notice appearing in Publisher's Weekly, 1893, reads, 'Gaylord Watson, map publisher, has been sold out by the sheriff. The sale realized about $800', suggesting that Watson had either died or fallen into bankruptcy. Watson lived in Queens, then Brooklyn, and in 1894, shortly before his death, Omaha, Nebraska. Learn More...