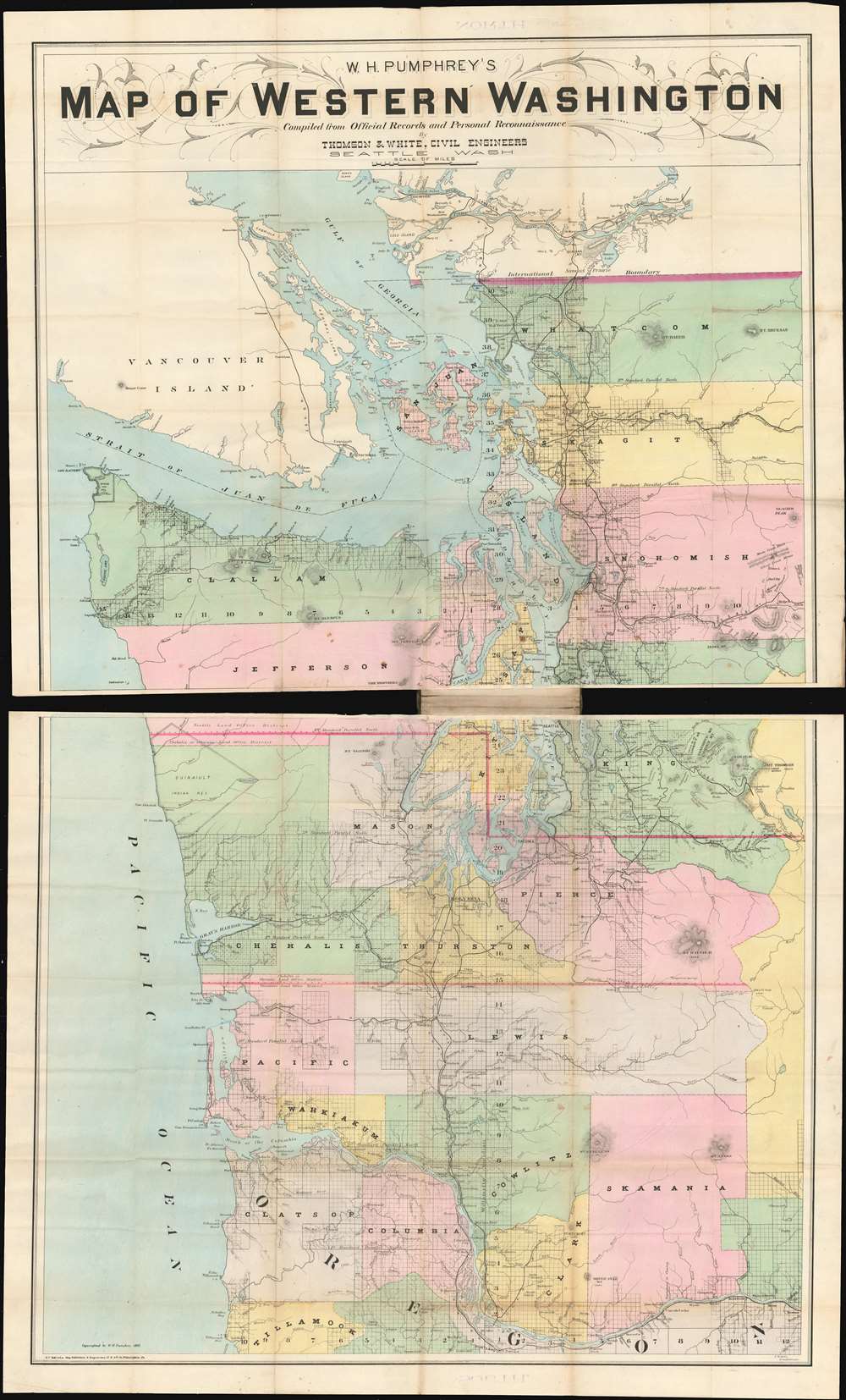 A Large, Superbly Detailed Map of Western Washington by its Premier Civil Engineer

This rare, detailed map is W. H. Pumphrey's 1892 Map of Western Washington: Compiled from Official Records and Personal Reconnaissance. Pumphrey, a respected Seattle fixture and proprietor of one of its finest stationers, sold the map: it was printed by the powerhouse Philadelphia map publisher Edward Noll and drawn by the Norwegian/ American draftsman F. M. Dehly.

The survey data was the work of Thomson & White, the firm of Reginald Heber Thomson - the most important of Seattle's city engineers, and one of the most important early surveyors of the State of Washington. It is the largest acquirable early map of the state, and among the most richly detailed. It includes many features that were not only surveyed by Thomson, but that were actually designed and implemented by the man: the railway line through Snoqualmie Pass, for example, and the Lake Washington Ship Canal. Throughout the map, broad surveyed areas are shown with grids, and counties are distinguished from one another with hand wash color.

A Period of Growth

The map was produced just a few short years after the catastrophic Great Fire of Seattle, and during a boom in railway construction and development in the wake of a boom in Pacific Northwest lumber. The burgeoning growth was attended with a massive real estate explosion, which this map was no doubt intending to capitalize upon.

We are aware of three examples of this map to have been on the market. OCLC lists examples in only ten institutional collections.

Reginald Heber Thomson (1856 - January 7, 1949) was an American civil engineer, and Seattle's most important city engineer. He lived and worked in Washington State; he was Seattle's city engineer for twenty years, and was responsible for the design of virtually all of that city's infrastructure. He planned railway routes, canals, the paving of Seattle's roads and sidewalks, bridges, and landfill. All this, in spite of his having been largely self-taught in his trade. Born in Indiana, he earned his BA at Hanover College before heading west with his father. In California, Thomson was a math teacher. He then moved to the Washington Territory for a coal mining venture, and settled in Seattle. There he became an assistant to city and county surveyor F.H. Whitworth, the beginning of a career that would make him city surveyor between 1884 and 1886. He then plotted routes for the Seattle, Lake Shore & Eastern railroad, and was responsible for several railway terminals and two bridges. With the start of the 1890s he returned to municipal work, planning street improvements for the city of Ballard (now part of Seattle.) He became King County surveyor in May 1891 but was again appointed to the city engineer position in 1892. He concurrently worked in the private sector, finding much employment in the rebuilding of the city after the 1889 Great Fire.Starting in 1888, he worked in partnership with George F. Cotterill and Clarence L. White; in 1890 the firm was known as Thomson and White.

Thomson became increasingly involved in the development of the city. He served as president of the University of Washington board of managers, became chief engineer for the Port of Seattle, served on the Seattle city council, and consulted on Oregon's Rogue River Valley Irrigation Canal. He built hydroelectric plants, planned the water supply of Bellingham, Washington and consulted on the system for Wenatchee. At the end of his life, Thomson wrote a posthumously-published autobiography, That Man Thomson. Learn More...


F. M. Dehly (1862-????) was a Norwegian-American engineer and draftsman living and working in Washington State in the 1890s. He arrived in the United States in 1880. He is known to have drawn Gilman's addition to the city of Seattle, McKee's correct road map of Seattle and vicinity, Washington, U.S.A., 1894, and W.H. Pumphrey's map of western Washington. He was working as a draftsman for the State of Washington in 1896, and as late as 1910 was still working as an engineer for the city of Seattle. He does not seem to have produced any further printed maps in his career. Learn More...


Edward. P. Noll (1855 - March 28 1926) was an American map publisher firm operating in Philadelphia; his work appeared prolifically in the last quarter of the 19th century and the first years of the 20th. E. P. Noll and company were a leading firm of the period, specializing in maps for bicyclists, motorists, and other travelers. He was born in Kentucky to German parents; the family moved to Cincinnati, where his father Peter Franz became a saloon keeper. Nothing is known of Edward’s early education, though by 1880 the family had moved to Philadelphia: that year’s census lists Peter Franz as a brewer, and Edward as a ‘map moulder.’ Learn More...


William Henry Pumphrey (August 30 1846-1921) was an American bookseller, stationer and pioneer. Born in Ohio to a farmer, he began work with the railroads - first in Wisconsin, later relocating to the Pacific coast 1870 saw him working as a clerk in Fort Gamble, and then in Seattle. He purchased an interest in the first stationery store in that city in 1871, eventually purchasing the entire company. In 1881, he shared the ownership of the stationer’s with James Lowman until the latter bought him out in 1882; the partnership was officially disbanded in 1883. That year he started his own stationery business, whose product appears to have included a sole map of the western part of Washington State. Though suffering setbacks from the Great Fire of Seattle (1889) by 1893 he was recognized as a leading stationer in the city. He was a member of the International Order of Odd Fellows, and a longtime Republican. He died, apparently from complications of blood poisoning, in 1921. Learn More...

Very good condition. Lithograph with original hand color. Some marginal mends and minor wear at folds. In original boards, removable on request. Size is approximate for printed area of each sheet.