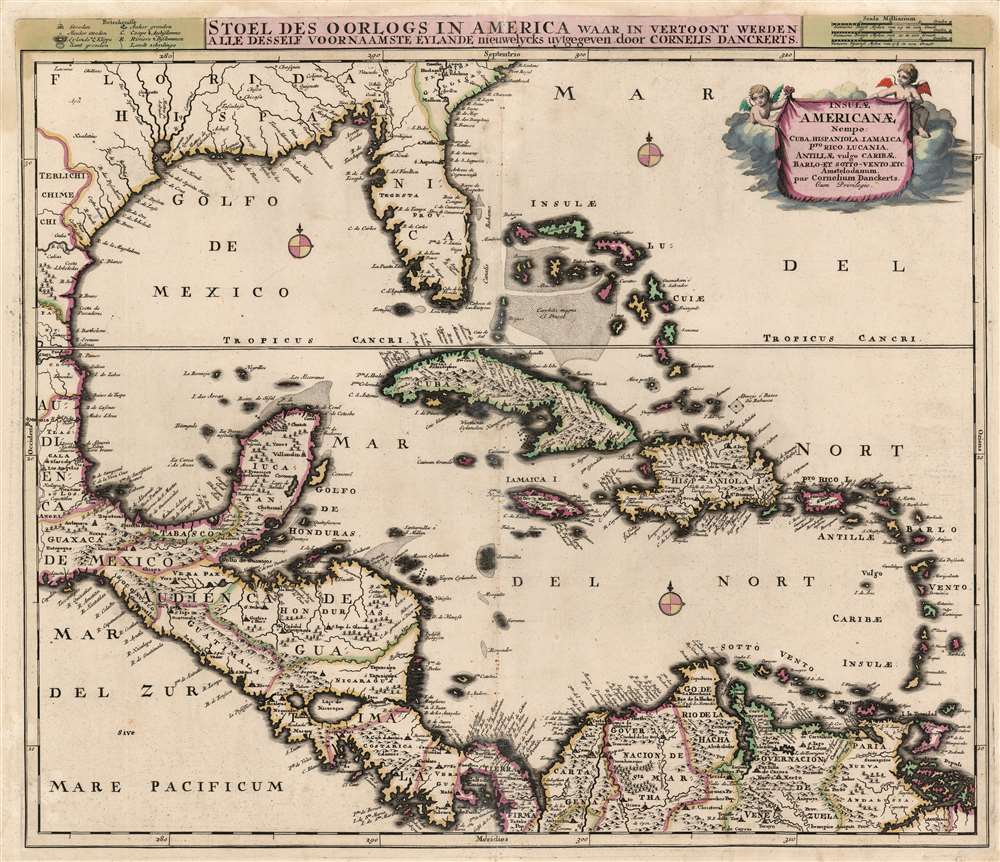 This is Cornelius Danckerts' rare 1696 map of Florida, the West Indies, Central America, the Caribbean, and the Spanish Main. This map covers from Mexico to the Antilles and from Florida to the Spanish Main, inclusive of Cuba, the Bahamas, Hispaniola, Jamaica, Porto Rico, and the Lesser Antilles. It extends as far north as Georgia and South Carolina, here referred to as 'Florida Gallica.'

Unique in a Long Lineage

Danckerts' map shares a similar title, and broad geographical features, with a number of maps produced in the 17th century. All, including Blaeu's 1635 Insulae Americanae, can be traced to Hessel Gerritsz' unobtainable 1631 chart De Eylanden Ende Vastelanden van Westindien op de Noordzee for their coastal detail. The interior detail is drawn from the 1680 Visscher Insulae Americanae in Oceano Septentrionali. The map is not a rote copy of the Visscher: although it employs a large copperplate similar to other late-seventeenth-century Dutch maps, Danckerts' map presents a narrower area as shown on the earlier Blaeu and Gerritsz maps, thus focusing more sharply on the Caribbean and the Gulf Coast than the Visscher, while sharing that map's inland cities, topographical details and place names.

Florida is labeled as the province of 'Tegesta,' following the convention established by Dutch cartographers Johannes de Laet and Hessel Gerritz in 1630. The Tegesta were an indigenous tribe active in southeastern Florida, around what is today Miami-Dade. They were encountered in the 16th century by Ponce de Leon and by one of the ships commanded by Pedro Menéndez de Avilés. Though largely subject to the more powerful tribes of western Florida, the Tegesta were among the first of Florida's indigenous groups to encounter Europeans and subsequently influenced the naming of Florida for some 200 years. Curiously, despite several expeditions and interesting earlier maps of Florida, Danckerts has chosen to leave the interior blank, noting neither the Everglades nor any of Florida's great lakes. This interesting cartographic decision to discard all previous mappings of the Florida region contrasts strikingly with the remainder of the map, which is lavishly and often speculatively detailed.

Following the western coast of Florida north along the Gulf and then west towards Texas and Mexico, we can begin to see just how little was known of the Gulf Coast despite nearly 200 years of European activity. The Mississippi River is entirely absent, though a great fan-shaped river system does radiate northward from the Bay of Spiritu Santo (likely Galveston Bay). Looking northward and inland from the Gulf Coast, a number of communities appear in reference to various indigenous groups encountered by the De Soto and Coronado expeditions - these include the Chicasa, the Talacasa (whose warriors nearly overwhelmed and slaughtered De Soto's army), and the Achusi.

The Caribbean and Bahamas

The West India Islands, centered on Cuba, are mapped with considerable accuracy although universally distorted on the north-south axis. The Bahamas are vaguely and inaccurately mapped throughout, although some attempt has been made to depict the undersea Bahama Bank. San Salvador or Guanahani, the supposed island where Columbus is said to have first landed, is noted.

The southwestern quarter of the map is dominated by a strikingly accurate Central America, despite the exception of a distorted Yucatan - which here appears almost like an inversion of a similarly distorted Florida just to the northeast. Both Lake Nicaragua and the adjacent Lake Managua are noted, but are situated on an east-west rather than the correct north-south axis.

Along the Spanish Main the great trading cities of Cartagena, Venezuela, and Valencia are noted, as are a number of missions and indigenous centers in the interior. Maracaibo Bay is entirely misrepresented. Further east, Danckerts attempts to illustrate the countless islands of the Orinoco Delta.

The elegant title cartouche is presented as a banner displayed by two putti, upon a bank of clouds.

Focusing On A Current War

The Dutch title at the top of the map roughly translates to 'The Seat of War in America, wherein is displayed the main islands, newly presented by Cornelis Danckerts.' The war in question was the Nine Years' War (1688 - 1697), considered to be the first global war, fought between France and a coalition of European powers including the Holy Roman Empire, the Dutch Republic, England, Spain, Savoy, and Portugal. The American theaters of the war were twofold: 'King William's War', fought between the French and English south of the St. Lawrence River in the Northeast and New York; and in the Caribbean, where an awkwardly-allied England and Spain attempted to reduce France's already limited colonial hold on the West Indies. Despite their numerical superiority, the technological limitations of seventeenth-century naval power made it impossible to prevent France from supplying its colonies. Saint Kitts changed hands twice, and fighting in Jamaica, Martinique, and Hispaniola notwithstanding, the Caribbean theatre was indecisive. Deprived of opportunity for major victories at sea, the European powers relied instead on privateers in what would be the tail end of the Golden Age of Piracy.

This is the first edition of this map, produced as early as 1696 as a separate issue, or for inclusion in made-to-order atlases. A second Danckerts issue exists, differing from the first with the addition of the path of the Spanish Silver Fleets. A further c. 1725 Ottens issue is much more commonly found. In addition to the Ottens imprint, Ottens reworked almost the entire Gulf Coast north of the Tropic of Cancer, as well as all of the inland area adjacent to the Mississippi River. We see perhaps a dozen examples of the Danckerts issues in institutional collections, all lacking convincing dating.

Very good. Marginal mend at bottom centerfold not affecting image. Else excellent with a bold strike and fine original color.