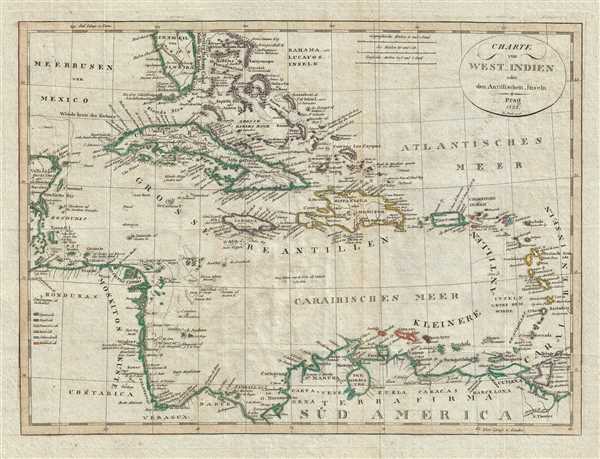 This is a rare 1822 map of the Caribbean prepared by Czech engraver Franz Pluth. The map depicts the region from the Yucatan Peninsula to the islands of Martinique, St. Lucia, and Trinidad and Tobago and from southern Florida and the Bahamas to northern South America, then referred to as 'Terra Firma'. Highly detailed and beautifully colored, nearly all of the islands in the region are identified, including numerous islands in the Bahamas, Jamaica, the Virgin Islands, Guadeloupe, Grenada, and Curaçao. The coasts of Cuba, Hispaniola, and Jamaica are illustrated in detail, with numerous locations identified on each of these islands. Cozumel is labeled off the coast of Mexico as well. The colors utilized here were not simply chosen for their aesthetic qualities; in fact, they refer to the colonial power in possession of the territory at the time. A key along the left border informs the viewer that territory bordered in green was Spanish, territory bordered in purple was English, and so on.

This map was produced by Franz Pluth in 1822.

Very good. Light wear along original fold lines. Light transferrence. Blank on verso.
Looking for a high-resolution scan of this?