1811 Russell Map of the West Indies 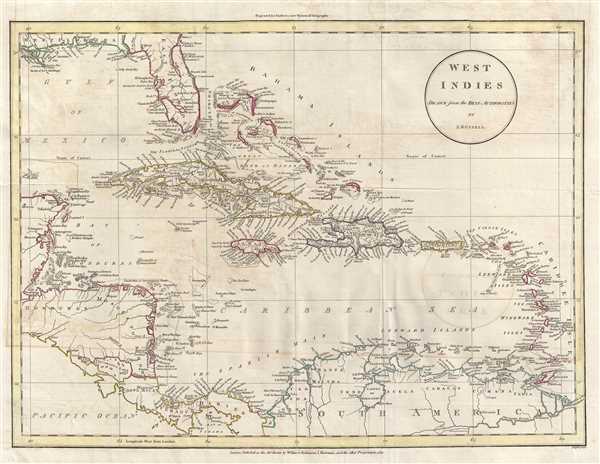 1811 Russell Map of the West Indies

This is an 1811 John Russell map of the West Indies and Central America. The map depicts the region from the Yucatan Peninsula to the Lesser Antilles and from Florida to northern South America, including Colombia and Venezuela. A remarkable amount of underwater detail is included, particularly off the coast of Belize, Honduras, and Nicaragua, labeled here as 'Mosquito Shore'. The same level of detail is present along the coast of Cuba and in the Bahamas. Grand Cayman, Jamaica, Puerto Rico, the Virgin Islands, St. Lucia, Barbados, and Trinidad and Tobago are among the other islands identified. Myriad locations, both in Central America and in the West Indies, are labeled along the coastline and inland. Nicaragua Lake is easily discernable. In South America, Lake Maracaibo, a brackish tidal bay in Venezuela, is also labeled. Along the coast of the United States, New Orleans, Mobile Fort, and Cape Canaveral are labeled, along with the mouth of the Mississippi River.

Very good. Light transference. Verso repairs to fold separations. Blank on verso.
Looking for a high-resolution scan of this?