1794 Wilkinson Map of the West Indies and Caribbean 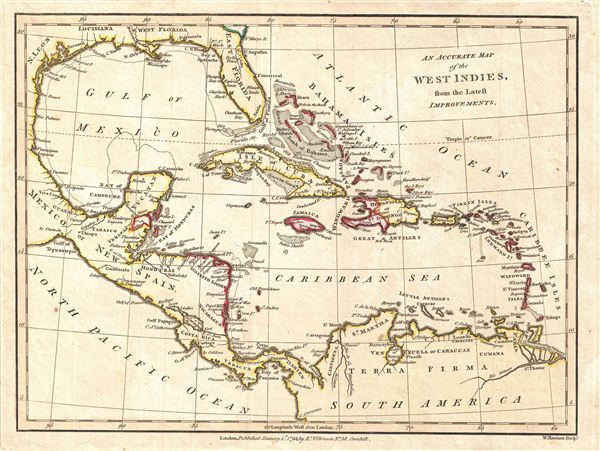 1794 Wilkinson Map of the West Indies and Caribbean

A finely detailed first edition 1794 map of the West Indies and the Caribbean by Robert Wilkinson. Wilkinson's map covers the West Indies, from the Mexican Coast to the Windward Islands, inclusive of , the Gulf of Mexico, the Caribbean, Central America, Florida, the Spanish Main, the Bahamas, and the Greater Antilles. each region is color coded to identify its colonial overlord, with Spain in yellow, england in red, and the few French colonies in green. The tentative British claims in Belize and on the Mosquito Coast, where english buccaneers, pirates, and privateers set up makeshift unofficial colonies from which to raid Spanish treasure fleets, are noted. As this region was highly important to British maritime commercial and military interests, Wilkinson also identifies various shoals and other undersea dangers throughout. engraved by Thomas Condar for the 1794 first edition of Robert Wilkinson's General Atlas.