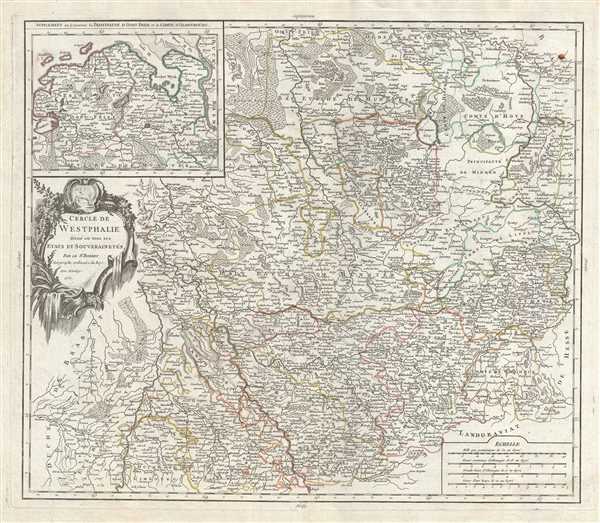 This is a fine 1751 map of Westphalia, Germany by Robert de Vaugondy. It covers from Liege, Belgium north to Bremen, Germany and east as far as Hameln. The entire region is depicted in extraordinary detailed, offering both topographical and political information, with forests and mountains beautifully rendered in profile. An inset in the top left quadrant depicts the East Frisia or Ostfriesland coastal region as well as the County of Oldenburg

Westphalia was one of the 'imperial circles' created by the Holy Roman Empire in the 1500s. These groupings of regional territories were designed for defensive, tax, and administrative purposes within the Empire. The map outlines the feudal Duchies and Counties of Westphalia as they were before being joined with other Prussian states in 'The Kingdom of Westphalia,' briefly a French vassal state under Napoleon from 1807-1816. The area was made famous in 1648 when the 'Peace of Westphalia' was signed in Munster and Osnabruck, ending the Thirty Years' War.

> A large decorative title cartouche appears near the left border of the map. Issued in the 1757 issue of the Atlas Universal. The Atlas Universal was one of the first atlases based upon actual surveys. Therefore, this map is highly accurate (for the period) and has most contemporary town names correct, though historic names are, in many cases, incorrect or omitted.

Rumsey 3353.058. Pedley, Mary Sponberg Belle et Utile: The Work of the Robert de Vaugondy Family of Mapmakers, 258, state 2.
Looking for a high-resolution scan of this?