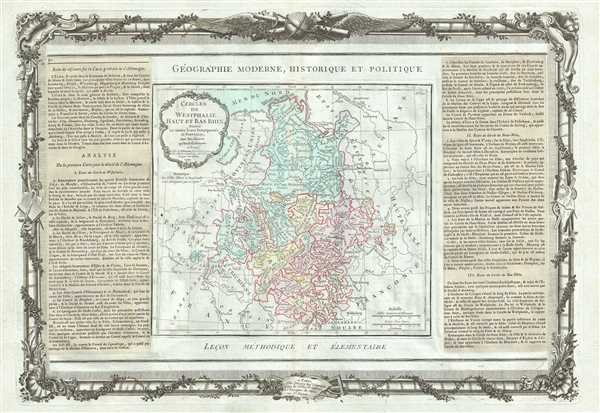 Covers the Rhine region, known for Riesling and sparkling wines.
$250.00

A beautifully detailed map of the Upper and Lower Rhine and Westphalia regions of Germany by the French Cartographer Louis Brion de la Tour. The map covers from the North Sea south to France and east to Upper Saxony. The 'circles' of Germany are the 'imperial circles,' administrative units created for tax and defense purposes by the Holy Roman Empire, of which these areas were a part. The Napoleonic Wars would, of course, dissolve the Holy Roman Empire and lead to the consolidation of Germany in 1871.

The map outlines the feudal Duchies and Counties of Westphalia as they were before being joined with other Prussian states in 'The Kingdom of Westphalia,' briefly a French vassal state under Napoleon from 1807-1816. The area was made famous in 1648 when the 'Peace of Westphalia' was signed in Munster and Osnabruck, ending the Thirty Years' War.

The region of Upper and Lower Rhine, also known as Rhineland-Palatinate, is known for its fine Riesling wines and is the world leader in sparkling wines.