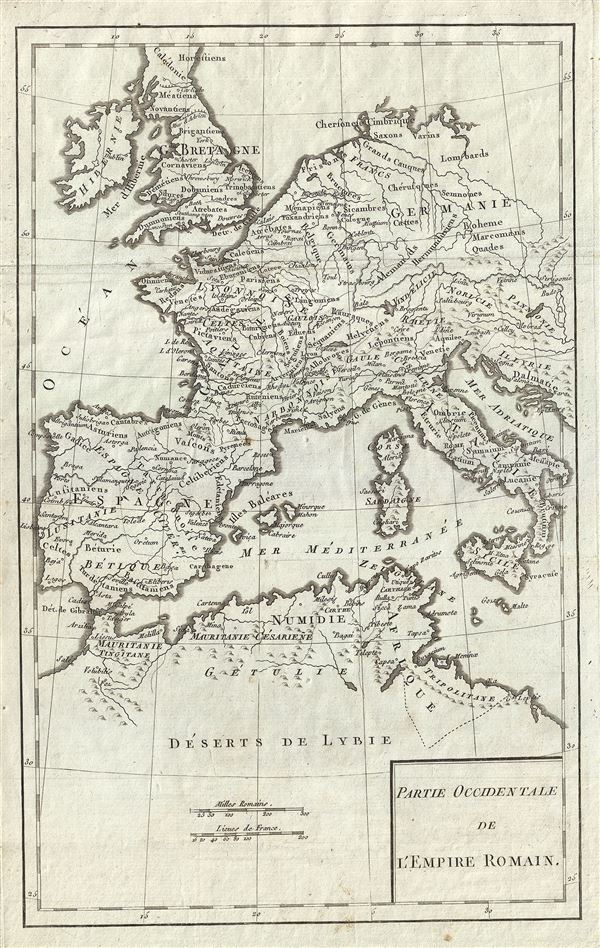 An appealing 1770 map of the Western Roman Empire by Jean- Baptiste-Claude Delisle de Sales. The map covers the western portion of the Roman Empire from Portugal to the Adriatic Sea and from Britain to northern Africa. It includes the modern day nations of the United Kingdom, Ireland, Germany, Netherlands, Belgium, France, Spain, Portugal, Italy, Switzerland, Austria, Czech Republic, and the northern parts of Morocco, Algeria, and Tunisia. The map identifies several important cities and towns and uses archaic names throughout. Rivers, islands, and other topography is noted with mountains rendered in profile.

The Roman Empire was established in 27 BC after Gaius Julius Caesar Octavianus, the grandnephew and heir of Julius Caesar was awarded the honorific title of Augustus. During the time of the Empire, Roman cities flourished. Trade spread as far as India, Russia, China and Southeast Asia. However, the sheer size of the empire and its success also contributed to its downfall. After the death of Theodosius I, the Empire was divided between his sons Honorius and Arcadius, who inherited the Western Roman Empire and the Eastern Roman Empire respectively. The Empire declined rapidly and finally collapsed in 476 AD, when Romulus Augustulus was deposed by the German Odovacer.