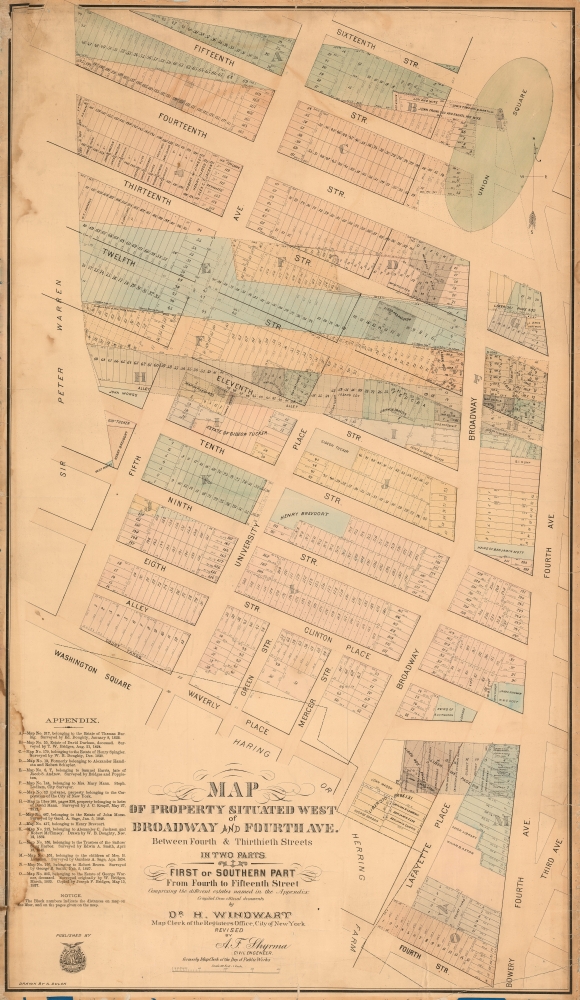 A scarce c. 1875 Heinrich Windwart cadastral map of the Greenwich Village neighborhood between Union Square and Washington Square Park, both of which appear on the map. The map coves from 16th Street and Union Square North, south as far as 4th Street and Waverly Place; and from 5th Avenue to Fourth Avenue. Shading reveals the borders of old estates and roads superimposed over the more modern grid structure. Lotted properties are demarcated throughout with individual land owners occasionally named.

In the early 19th century most of Manhattan was undeveloped farm land, the property of wealthy landowners with claims dating to the Dutch period of New York's history. Much of Manhattan was dotted with farms and sprawling gentlemanly estates, often with great manor houses overlooking the river. The Commissioner's Plan of 1811 and the 1807 Commission Law, laid the street grid through many of these old properties and gave the city the right to claim such lands under eminent domain, providing due compensation to the landowners (and their heirs).

A few savvy mapmakers, among them Holmes and Windwart, became fascinated by the early history of Manhattan real estate ownership, recognizing the financial opportunity of accurately understanding the history of city land ownership, division, and inheritance. Moreover, these individuals often had political clout, Holmes through the Tweed administration and Windwart through his connections to the city Registrar, assuring themselves and their allies even greater opportunity from the eminent domain seizure of old Manhattan estates. They created a series of maps, reminiscent of John Randall's 'Farm Maps', overlaid with property data, showing the borders of old estates, and notating the breakup of the lands among various heirs. The complex work of compiling the maps yielded valuable information that earned their makers fortunes.

This map was published by Heinrich Windwart around 1875. It is based upon original survey work by Arnold Dulon, updated and revised by Alexander F. Shyrma. The lithography is the work of Joseph Laing. We have identified examples at the New York State Library and the New York Public Library, suggesting considerable rarity.

Heinrich Windwart (July 12, 1810 - April 30, 1881) was a German civil servant, revolutionary, medical doctor, and map publisher. He was born in Bavaria and studied at the University of Jena. He was heavily involved in the German Revolutions of 1848. When the revolutions were suppressed, he went into exile, first in Switzerland, then France, and ultimately, in 1853, to the United States. He initially settled in Baltimore, but moved to New York in the 1860s when his fellow German 'Forty-Eighter,' Franz Sigel (1824 - 1902), was elected Registrar of New York City, and offered him a clerk position. Windwart was one of several map publishers, the most famous of whom was John Bute Holmes, who was able to leverage cartographic skill to capitalize on the New York City transition from grand 18th century estates to the meticulously gridded and plotted structure of the Commissioner's Plan.


Arnold Dulon (1843 - August 14, 1929) was a city surveyor and topographical draftsman in the service of the city of New York in the late 19th and early 20th centuries. Dulon was born in Germany and, fleeing the unrest associated with the Revolutions of 1848, emigrated to the United States, arriving in Ellis Island on September 30, 1853. Dulon served in the Union army during the American Civil War from 1862 to 1863. Following the war, he was in the employ of the city of New York for more than 20 years: 1872 - 1875 Registrar's Office, 1894 - 1897 Commissioner of Street Improvements, 1898 - 1901 Board of Public Improvements, 1902 - 1915 Topographical Draftsman for the Bronx. He applied for retirement in 1915, citing that at his advanced age, 73, he was physically incapable of performing his duties. After retiring Dulon moved to California, living in Solano from 1918 until 1928.


Joseph P. Laing (1828 - 1905) was a Scottish printer and engraver active in New York during the middle part of the 20th century. Laing was born in Edinburgh, Scotland, and apprenticed as an engraver under W. H. Lizars. He emigrated to the United States in 1845, taking work with the firm of Snyder and Black. Afterwards, in 1850, Laing established himself as a private engraver and publisher at 25 Fulton Street. He also became a naturalized U.S. Citizen in 1852. In 1861, at the outbreak of the American Civil War he enlisted as a Captain in the Union Army, 79th Regiment, Scotch Highlanders. During his service, he was wounded eight times and captured (and escaped) twice. He fought at the Battle of Bull Run. Sometime during the war, he partnered with William Lang, and relocated his shop to 117 Fulton Street, which also, during this period, served as a Union Army recruiting office. Laing's partnership with Lang dissolved in 1862 but he continued to print under his own imprint until at least 1889. He was also a Mason of the Scottish Rite, a Major of the New York State National Guard, and was active with the Burns Club.


Alexander F. Shyrma (1842 - ????) was a Polish-American New York City based civil engineer, inventor, and surveyor active in the late 19th century. In 1873 Shyrma invented and patented a technique for layout cement pavement. He married Elizabeth Jane Wingrove in 1868. In the early 1870s he was a Map Clerk at the New York City Department of Public Works.