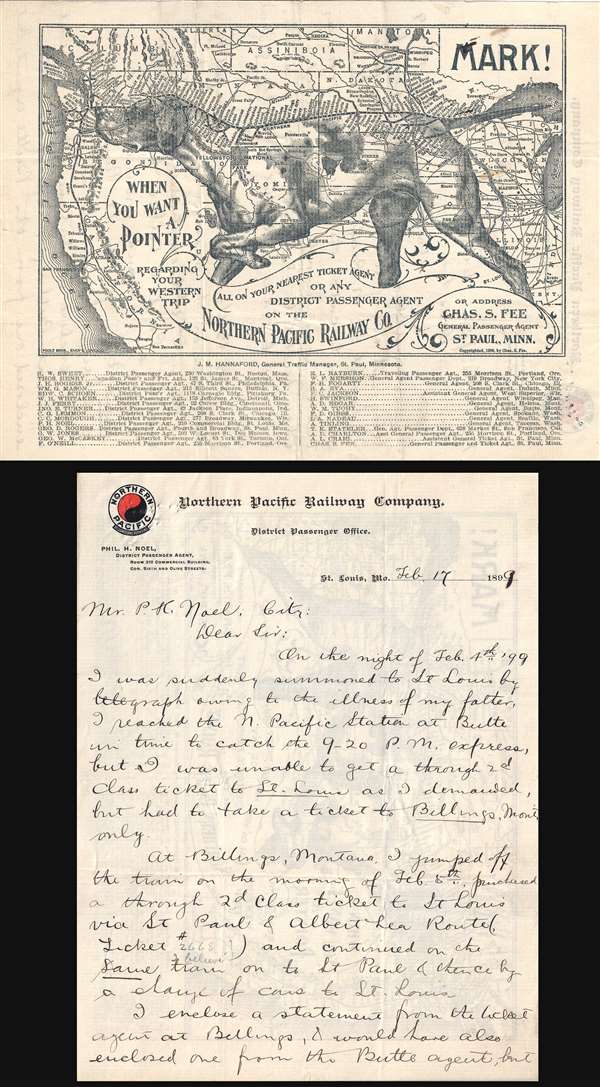 When you want a pointer…'

An utterly charming 1896 lithograph pictorial map issued to promote travel to the Pacific Northwest via the Northern Pacific Railway. This map was issued in 1896 by Charles S. Fee, general passenger agent for the Northern Pacific Railway. It covers the western part of the United States roughly from the Great Lakes to the Pacific. Superimposed upon the map is the image of an English Pointer dog in classic 'pointer' pose. The dogs head spine, and tail illustrate the course of the Norther Pacific Railway from Duluth, Minnesota to Olympia, Washington. Promotional copy overlaying the map reads,

Below the map proper there are lists of passenger agents and the cities where they can be found.

The verso of the map reveals that this map was actually the official stationary of the Northern Pacific Railway Company. In this case, it is the stationary of Phillip H. Noel, District Passenger Agent in Saint Louis. The letter, which is incomplete, describes a voyage from Butte, Montana to Saint Louis, Missouri, and what appears to be a customer complaint over the inability to acquire a second class through ticket from Butte.

This map was engraved and printed for the Northern Pacific by Poole Brothers of Chicago. It appears to be quite rare, with only a single 'digital' example listed at the OCLC and one at the Washington State Historical Society.