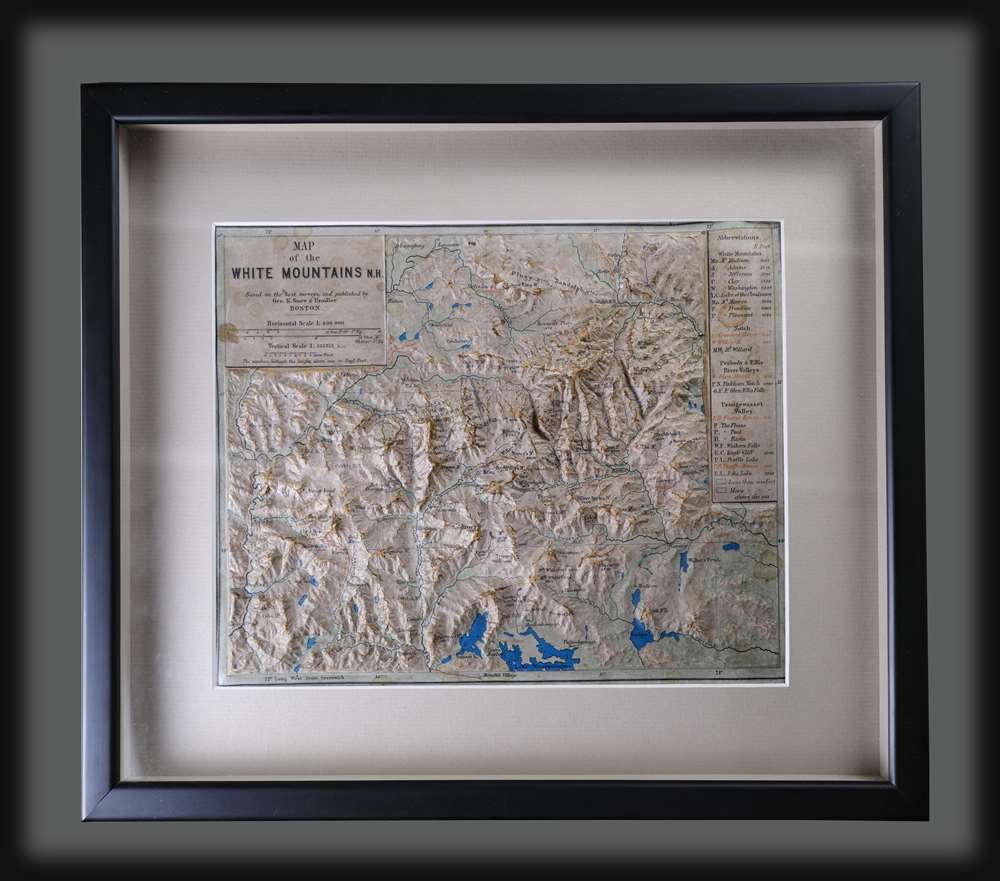 One of the earliest commercial relief maps for sale in the US.

This is a rare 1872 raised relief map of the White Mountains of New Hampshire - considered one of the earliest raised relief maps issued commercially for the American market. The map was issued at the height of the 19th century White Mountains tourism boom that followed railroad penetration into the scenic region. The map is crafted in Papier Mâché to which text has been 'somehow' printed to conform to the terrain. The vertical scale is 1 : 133333. Shading distinguishes elevation, and a key in the upper right notes mountains, exceptional natural sights and lodges (or houses). Red highlights items of interest to the tourist, including the railroad system and various lodges.

Quoting form Edward O'Reilly of the New-York Historical Society's 'From the Stacks' blog post on this map (April 22,2020),

The map is also a compelling way to illustrate America's changing relationship with nature in the 19th century. By late in the century, railroads carved through America's forests opened previously inaccessible wilderness to tourism. As a result, early ambivalence and even outright hostility toward nature gave way to Americans 'of means' taking notice of the nation's impressive natural beauty. Boasting the highest peak in the Northeastern U.S., New Hampshire's White Mountains was a popular destination. Infrastructure followed, and according to a contemporary guide book, 'a vast and increasing number of travellers.'

This map was published c. 1872 by K. Snow and Bradlee. Contemporaneous reports suggest that while the cartography was prepared in Massachusetts, the map was produced on behalf of the publishers in Germany - which makes sense, as the first commercial relief maps began being produced there in the 1860s. We note some six examples in the OCLC, including holdings at the New York Public Library, the New Hampshire Historical Society, the University of New Hampshire, and the Boston Public Library. Scarce to the market.

George Knowles Snow (August 19, 1826 - August 3, 1885) was a Boston, Massachusetts publisher active in the second half of the 19th century. He was born in Orleans, Massachusetts. Snow is generally associated with his brothers-in-law 'Bradleee'. Under the imprint of 'G. K. Snow and Bradlee', the firm published Snow's Pathfinder Railway Guide for the New England States, from about 1869. Bradlee may refer to both Charles Horace Bradlee and his brother John Emery Bradlee - both of whom published tourist guides of New England and particularly the White Mountains. This would do much to explain the lack of first initials in the 'Bradlee' portion of the imprint. Snow marred Mary Jane Bradlee (1828 - ????), the sister of John Emory Bradlee (1831 - c. 1882) and Charles Horace Bradlee (1844 - 1912). Learn More...


Charles Horace Bradlee (August 18, 1844 - May 7, 1912) was a Boston based printer and publisher active in the second half of the 19th century. Bradless worked with his brother-in-law George Knowles Snow (1826 - 1885) and elder brother John Emory Bradlee (1831 - c. 1882) as 'G. K. Snow and Bradlee', to publish Snow's Pathfinder Railway Guide for the New England States, from about 1869. Charles died in Tilton, New Hampshire and was buried in Waterdown at the Common St. Cemetery. Learn More...


John Emory Bradlee (July 19, 1831 - c. 1881) was a Boston based printer and guide-book maker specializing in the White Mountains. He was born in Boston and worked in various businesses, including real estate and publishing. For many years he was the manager of Boston Color Printing. He also worked with A. W. Strauss and Company and Payson Park Lank Co. of Belmont. He was likely associated with this brother Charles Horace Bradlee (1844 - 1912) and brother-in-law George Knowles Snow (1826 - 1885), in the publication firm 'G. K. Snow and Bradlee'. Bradlee served in the American Civil War (1861 - 1865) in the 44th Infantry Learn More...

Good. Framed to modern conservation standard. Some wear and cracking at mountaintops. Some staining.