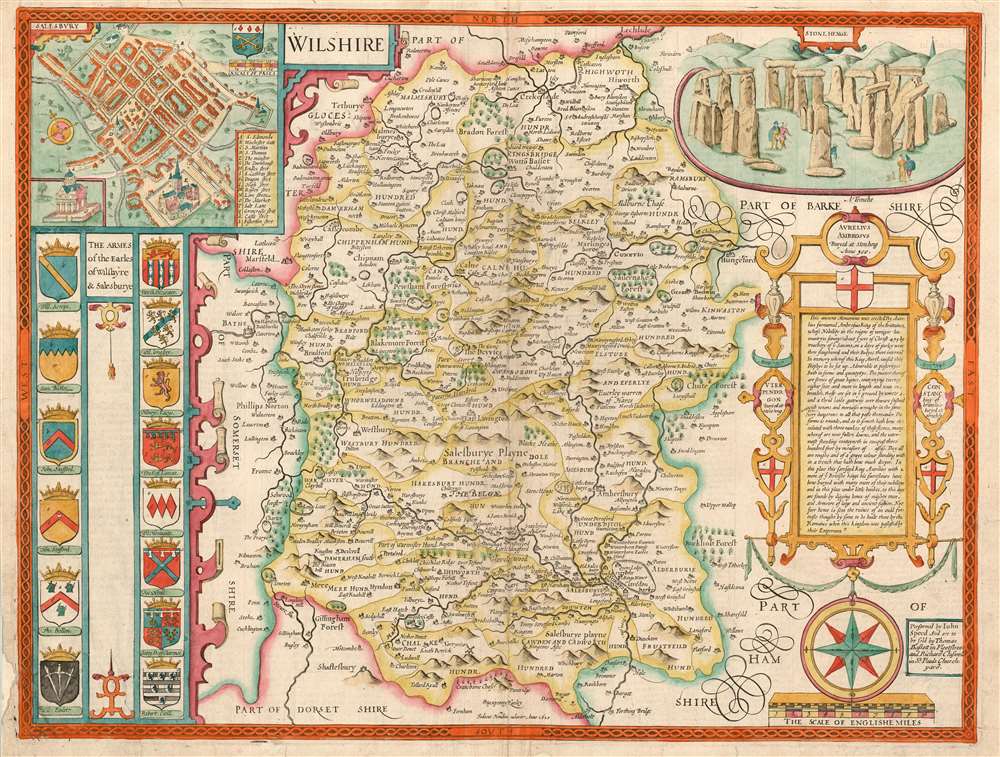 Richly Decorative County Map with an Early Depiction of Stonehenge
$950.00

This is John Speed's map of the county of Wiltshire in southwestern England. It was included in Speed's The Theatre of the Empire of Great Britaine, which was the first collection of maps of the counties of the British Isles. The map is richly detailed, showing towns, abbeys, castles, forests and parklands. The countryside's hilly terrain is shown pictorially. An inset plan in the upper left details the cathedral city of Salisbury: a key labels the important streets, locations of the town hall, cathedral and other important churches, and the town market. Below the inset are fourteen coats-of-arms, belonging to the Earls of Wilshire and Salisbury.

Hewn Into the Living Rock

As wondrous in the 17th century as it is now, Stonehenge figures prominently on Speed's map. It is named and shown pictorially on the map itself, west of Amesbury (Ambersbury on the map,) but the a view of the site is included on the upper right of the engraving, complete with figures to show the size of the stone columns. Below this, Speed includes a pseudohistory of the monument, claiming Stonehenge to have been raised in 475 CE by the legendary uncle of King Arthur, Ambrosius Aurelianus, who would then be buried amongst the stones in the year 500 CE. (Radiocarbon dating suggests that the first stones were raised between 2400 and 2200 BCE, but alas, Speed had only Geoffrey of Monmouth's Historia Regum Britanniae to go by.) He describes the impressive monument:

The matter thereof are stones of great bignes, containing twenty eight foot and more in length and ten in breadth, these are set in ye ground by towers 2 and a thrid (sic) laid gatewise over thwart fastened with tenons and mortises wrought in the same which seems very dangerous to all that passes thereunder. The forme is round, and as it semeth hath bene circulated with three rankes of these stones, many whereof are fallen downe, and the uttermost standing conteyneth in compass three hundred foot by measure of assise. They all are roughe and of a graye colour standing with in a trench that hath bene much deeper.

The superb engraving is the work of Jodocus Hondius, who engraved many of the plates of Speed's atlases.

This map was engraved by Jodocus Hondius in 1610 for inclusion in John Speed's The Theatre of the Empire of Great Britaine published in London by Sudbury and Humble in 1614 It continued in publication in the atlas in all its editions, including those that were bound together with Speed's A Prospect of the Most Famous Parts of the World. This example bears the imprint of Basset and Chiswell, whose edition of Speed's atlases was published in 1676. Perhaps a dozen examples of the separate map, in various editions, appear in institutional collections.

Speed, John. An Atlas of England and Wales. By J. Speed (Basset and Chiswell, London) 1676