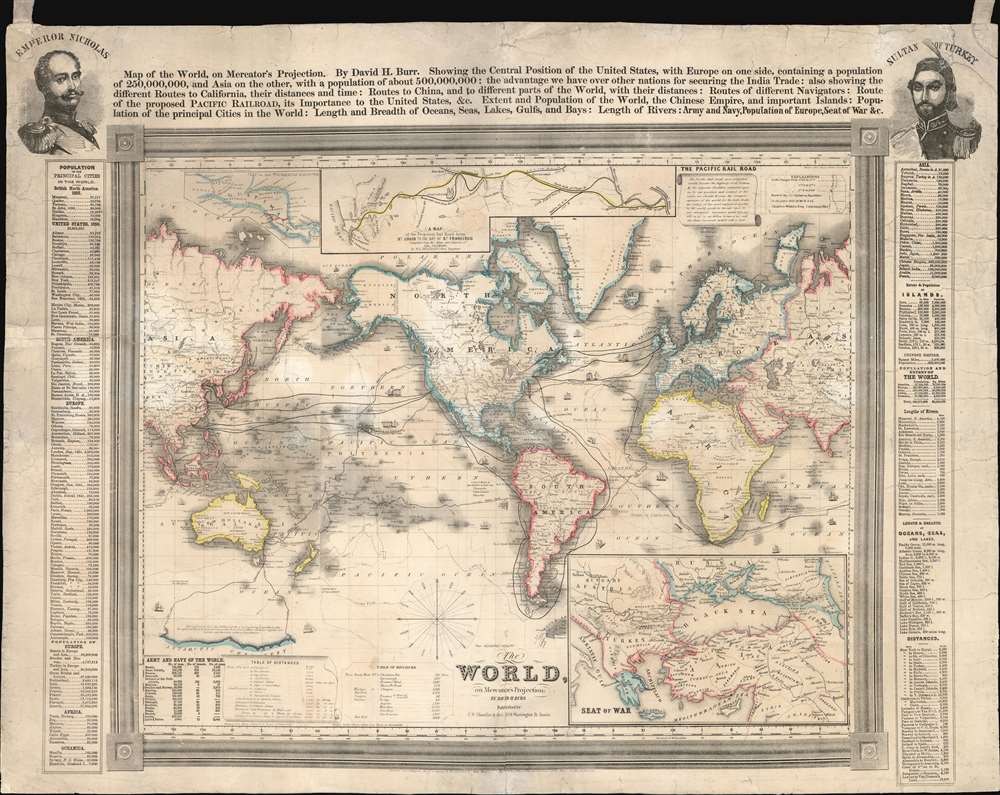 Map positing the United States as the hub of the 'India Trade'.

An extraordinary and rare 1853 broadside map of the world by David H. Burr arguing that the completion of a transcontinental Pacific Railroad would lead to American dominance of the Asia Trade. Presented on a Mercator Projection, the map places the United States within the context of global trade and is formatted to establish an immediate contrast between Asia and Europe - and present the Americas as the ideal middlemen. Text above the main map underscores Burr and Chandler's vision by contrasting the population of Europe (250,000,000) with the population of Asia (500,000,000) thereby arguing for an 'unlimited market.' At the same time, the cartographers use the events of the Crimean War (1853 - 1856), then being fought, to suggest overland routes to China and Japan are closed and unreliable.

Following the annexation of Texas and Upper California at the end of the Mexican-American War, the United States found itself controlling a vast coast-to-coast empire. The 1849 California Gold Rush led to rapid westward expansion and a population bubble on the west coast. Connecting California to the Eastern Seaboard with an overland railroad route was essential to the growth and stability of the country. Hopes for the railroad where high, and Congress authorized a series of preparatory surveys of practical routes, known collectively as the Pacific Railroad Surveys, to be completed between 1853 and 1855. The general consensus was that the most logical route would be to connect with existing railroad lines terminating at St. Louis, Missouri, and extending them west, initially along the Missouri and Platte Rivers, then crossing the Rocky Mountains, and thence west along the Humboldt River and Sacramento River to San Francisco.

While all agreed on the importance of Pacific Railroad, not everyone was ready to act. Lobby groups published propaganda, like this map, to illustrate the benefits of the route, but ultimately, Congress was slow to act. Finally, in 1862, Congress passed the Pacific Railway Act, leading to the chartering of the Union Pacific Railroad Company, charged with constructing the route. Unfortunately, by this time the United States was fully embroiled in the American Civil War (1861 - 1865), which further stymied construction. In was not until May 10, 1869, nearly 17 years after this visionary map was printed, that the robber baron and railroad tycoon Leland Stanford drove the Golden Spike at Promontory Summit, Utah Territory, linking the eastern and western spurs of the Pacific Railroad and creating the first transcontinental railroad.

The Crimean War was a military conflict fought from October 1853 to February 1856 that set the Russian Empire against an alliance including Ottoman Empire, France, the United Kingdom and Sardinia. The root cause of the war has never been fully understood, but the stated impetus for hostilities was the rights of Christians in the Holy Land, with the Catholics being supported by the French and the Greek Orthodox Church gaining the support of the Russians. Other factors also included the gradual decline of the Ottoman Empire and British and French concerns about Russian gains in the region at the cost of the Ottomans.

Hostilities erupted in July 1853 when Russia invaded two Ottoman suzerainties known collectively as the Ottoman-controlled Danubian Principalities, Wallachia and Moldavia. Alarmed by the possibility of an Ottoman collapse, the British and French jumped to their aid, sending troops and supplies to Gallipoli. The allied forces staged an invasion of the Crimean Peninsula in September and a siege of the Russian naval port of Sevastopol, their primary naval base in the Black Sea. Russia finally sued for peace in March 1856 and in the Treaty of Paris the ended the war Russia lost its Black Sea ports, Wallachia and Moldavia gained a modicum of independence, and Christians in the Holy Land were given a degree of equality.

Framing this map in the context of the Crimean War

Among the map's more striking features are portraits of Tsar Nicholas I (1796 - 1855) and Sultan Abdulmejid I (1823 - 1861) in the upper left and right corners of the map, respectively. These were the primary antagonists in the Crimean War. Nicholas wanted great power in the Black Sea, and thus control of the Bosporus, and the waning Ottoman Empire wanted to maintain its regional hegemony. While not overtly making any claims regarding the Crimean War, the framers of the map effectively argue that, by using the Americas as a transit point to Asia, merchants can avoid this region of unrest.

There are two dates on the map. The earliest is a copyright date of 1850, associating the map with John Haven. We have been able to trace an example of the Haven edition, likely the first, in the David Rumsey collection at Stanford. Rumsey speculates that it is a reissue of an earlier edition c. 1842, citing the route of Wilkes and the U.S.Ex.Ex. as indication. An even earlier variant was drawn by Burr, engraved by Stiles, and published by Colton in 1840. The latest date on this map is 1852, from which the census and population data are drawn, but the inclusion of Crimean War data suggests the map must have been published in or after 1853. The inclusion of Tsar Nicholas 1, who died in 1855, suggests that 1855 is the latest possible production date. Moreover, since none of the cartography included here relates to the Pacific Railroads Surveys, we can assume a date of 1853 or 1854. While various states of the map do appear in institutional collections, all examples are rare to the market. This present Chandler example, with Crimean War data, appears to be unique.


Samuel Ward Chandler (July 12, 1803 - April 9, 1900) was a Boston-based engraver and lithographer active in the middle part of the 19th century. He was born in Petersham, Massachusetts, and attended Leicester Academy, then studied Law Harvard, graduating in 1822. He worked in the Law Office of Tehophilus Parsons (Chandler?) for one year, before leaving the law in favor of business. He founded the lithographing and engraving firm of S. W. Chandler and Bros. with his brother John Greene (1815 - 1879) around 1844. The firm was most active from 1844 to 1858, with most of their publications dating from 1855 - 1857. Chandler printed views, decorative prints, and maps. Around 1870 he opened a paper manufactory in Boston, which he promptly relocated to Delaware. He remained in business until 1876, before formally retiring. Chandler lived in most of his early life Roxbury, where his family was based since 1637, but at some point after 1870, relocated to 1511 Girard Avenue, Philadelphia, where he died of the 'grip'. In his later year he was hailed as Harvard's oldest living alum. Learn More...


Samuel Stiles (July 15, 1796 - April 3, 1861) was a New York based engraver of maps and bank notes active in the middle part of the 19th century. Stiles was born in East Windsor, Connecticut, and there served his apprenticeship as a line-engraver under self-taught master Abner Reed. In 1821, following his apprenticeship, Stiles relocated to Hartford, Connecticut, with is former master, Abner Reed, to form the firm of Reed and Stiles. Reed and Stiles worked in portrait, historical, landscape, and map engraving on wood and copper. Another former Reed apprentice, Pelton, joined the firm in 1822, changing the name of the firm to Reed, Stiles, and Pelton. Around this time, he also joined the Connecticut State Militia where he was commissioned as a corporal in the same Calvary regiment as his brother Asabel Chapin Stiles. In 1824 he relocated to Utica, New York, where worked with Vistus Balch, also a former Reed apprentice. Stiles and Batch moved to New York together in 1828 to found Balch and Stiles, banknote engravers. In 1833 Samuel Stiles partnered with Joseph Hutchins Colton, then a young man, to found Stiles and Company – Colton being the 'company.' This partnership lasted until 1836 when he and Colton published their great plan of New York City, known as the 'Colton Map.' Colton went his own way and became a major American map publisher. Stiles moved a few blocks away and partnered with George E. Sherman and Colin Smith to found Stiles, Sherman and Smith. The partnership dissolved in 1840 and Stiles took up again with J. H. Colton, who was already becoming prominent. In 1841, he joined the firm of Danforth, Ball, and Company, Bank Note Engravers. This firm eventually merged into the American Bank Note Company. In 1859 Stiles became a founding member of the National Banknote Company, which incorporated as the American Banknote Company. He was the treasurer of this successful firm until his death in 1861. On a side note, Stiles married the daughter of Abner Reed, Charlotte Sophia Reed, in 1825. Their son, Henry Reed Stiles attained fame of his own as historian and genealogist. Learn More...

Average. This map has had considerable older restoration. It is laid down on old linen - intended to be hung by straps attached to the upper corners. Evidence suggests that this led to corner damage that was subsequently repaired. The map also exhibits several repaired tears and one area of infill near the title of the Upper 'Pacific Railroad' inset.