1852 Colton's Map of the World on Mercator's Projection ( Pocket Map ) 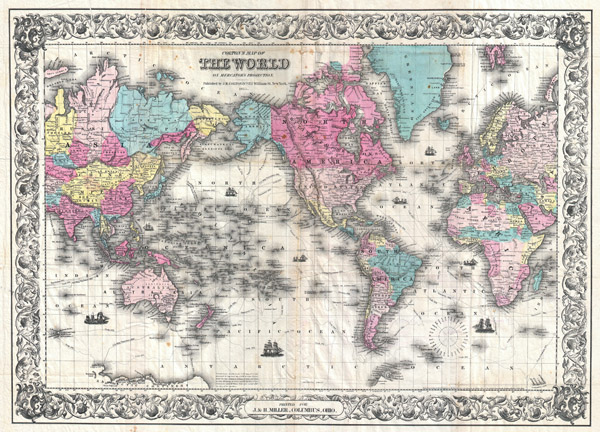 1852 Colton's Map of the World on Mercator's Projection ( Pocket Map )

A rare and extremely attractive folding map of the world by J. H. Colton. This map, comprising the entire world, was prepared by Colton in 1852 for issue in J. & H. Miller publication in the 1855 edition of Blake's Volume of the World…. In preparing this map, Colton reduced and embellished his important 1848 wall map of the World. Centered on America, map depicts the whole of the known world in 1855. Shows Antarctica only partially. Illustrates the routes traveled by important explorers including Cook, Vancouver, Perouse, the U.S. Ship Vincennes, and others. Decorated with eight engravings of sailing and steam ships. Surrounded by an elaborate decorative floral motif border. Later in the same year, Colton would again reduce this map for presentation in his own Colton's Atlas…


John and Henry Miller (fl. c. 1847 - 1861) were American booksellers and publishers based in Columbus Ohio. The J. & H. Miller firm was active during the mid 19th century. Though not specifically map publishers, the Millers published a number of historical works, many of which contained folding maps. The Miller firm is especially well known for its attention to African American related publications in the years preceding the Civil War.

Blake, W., (pseud Thomas, H. Prescott), The volume of the world: embracing the geography, history, and statistics, of the nations of the earth … (1855 edition)

Wichita State University Library, Special Collections, 1856-0002.
Looking for a high-resolution scan of this?