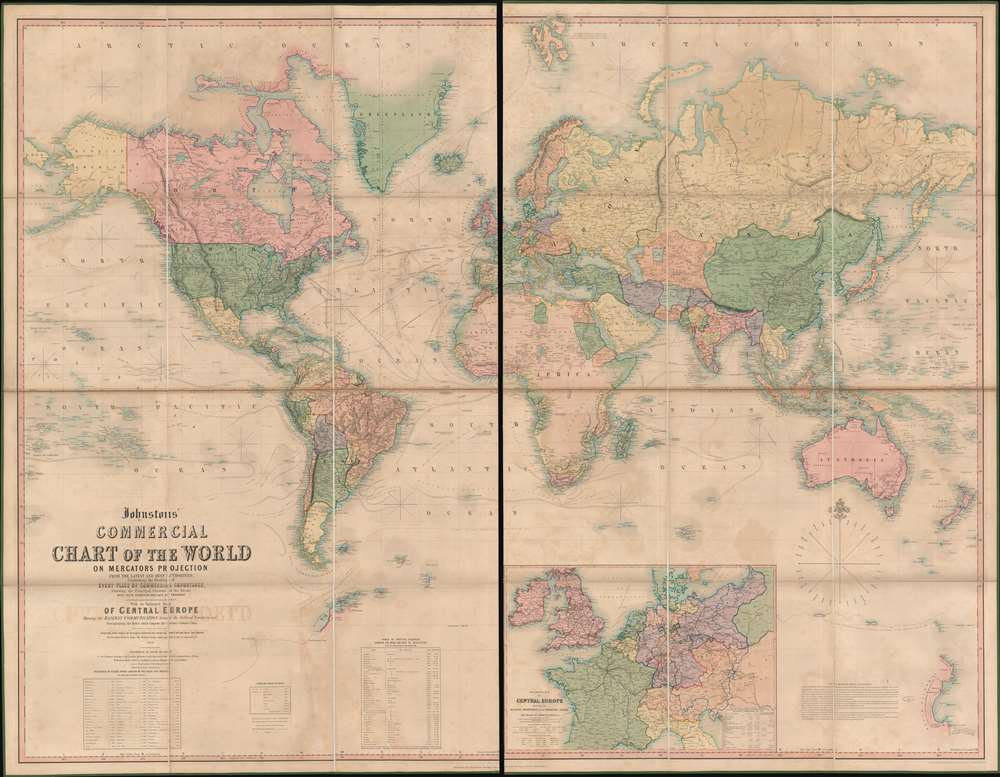 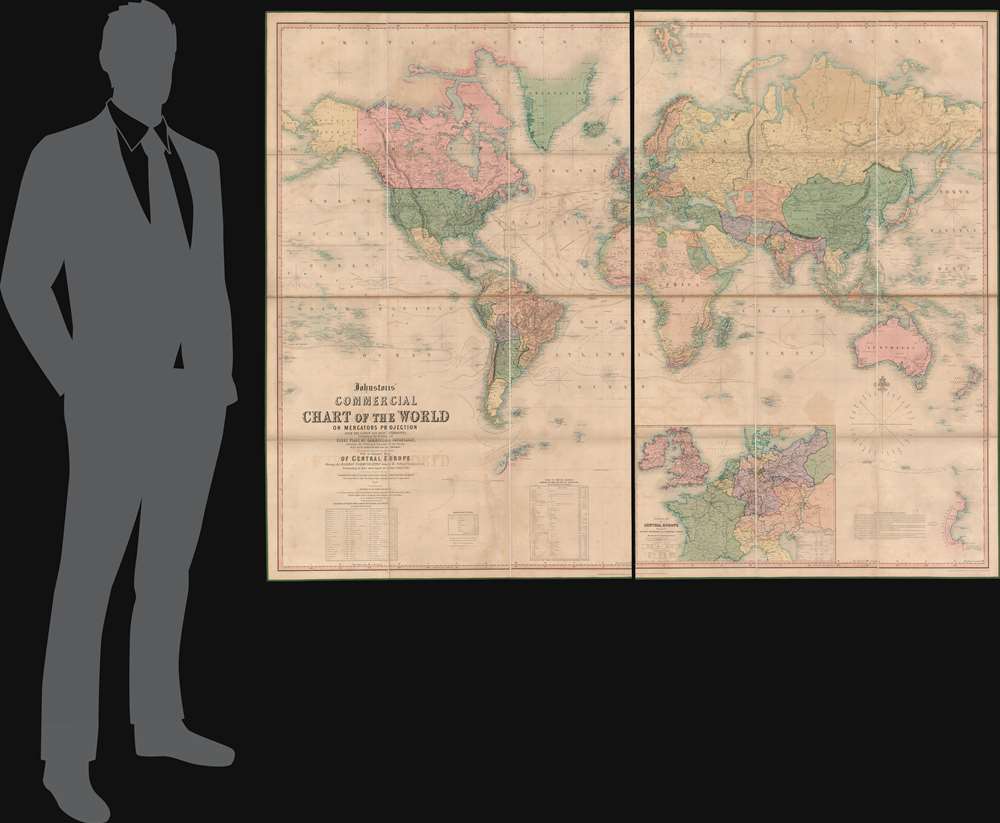 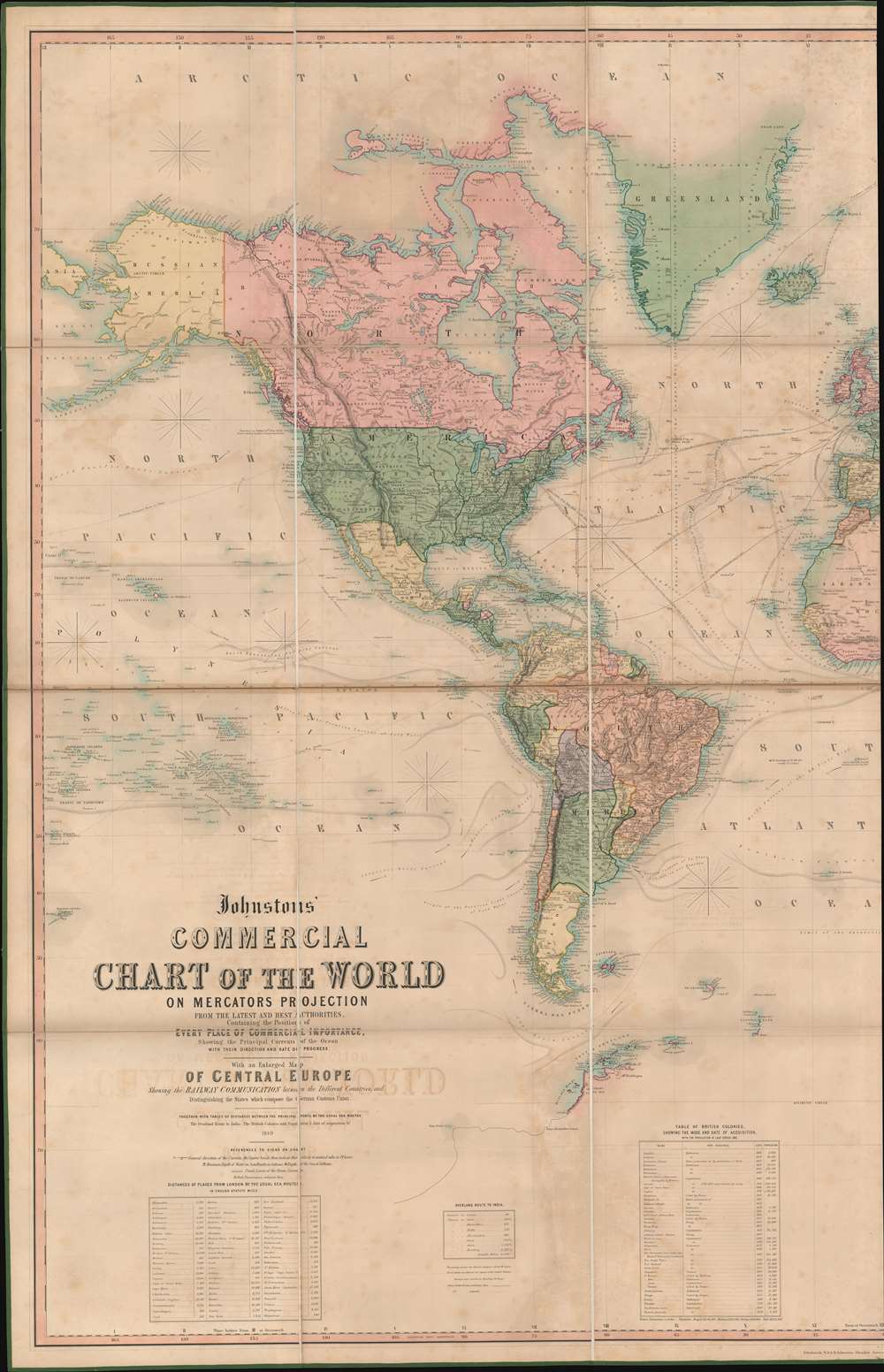 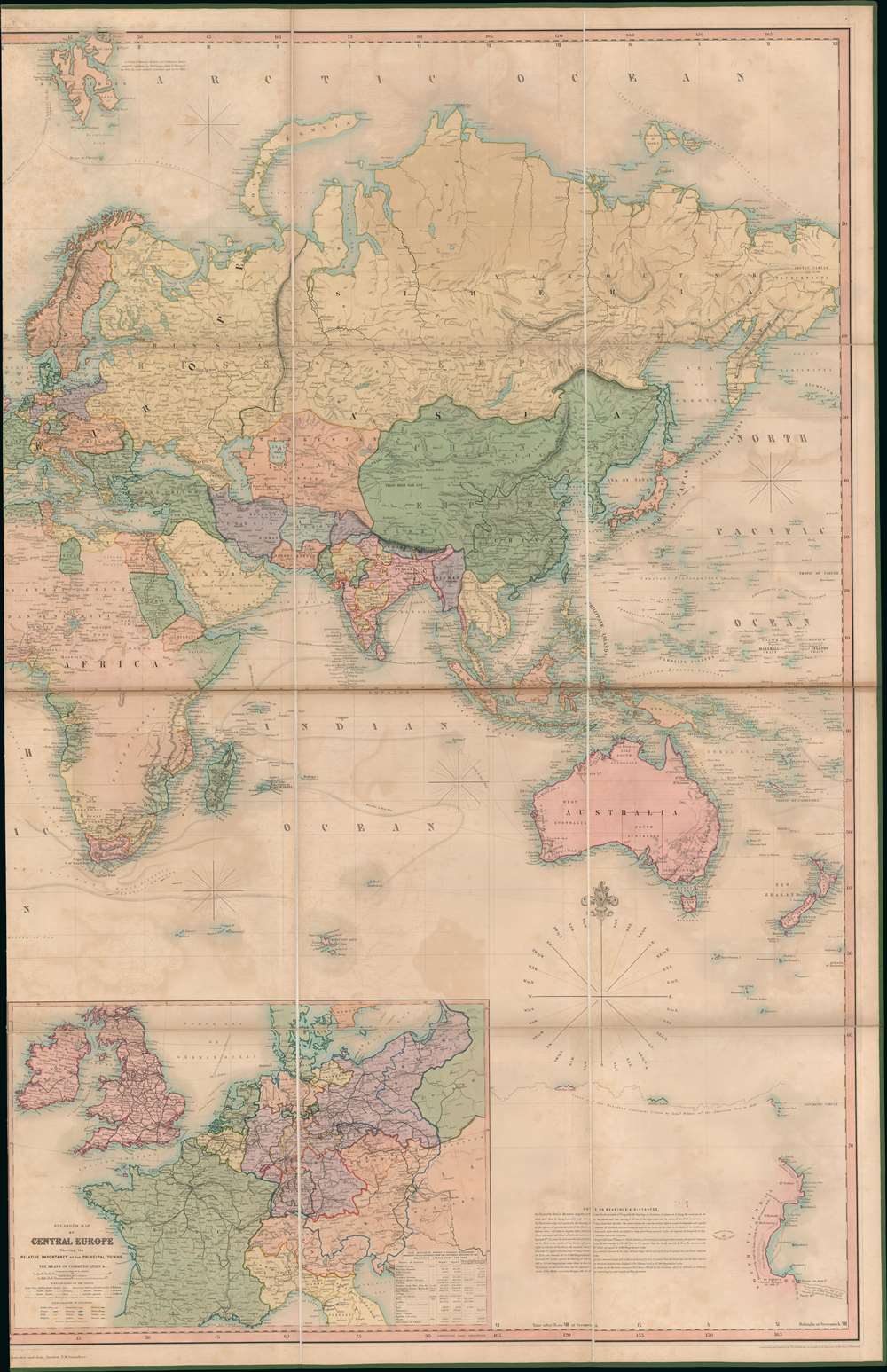 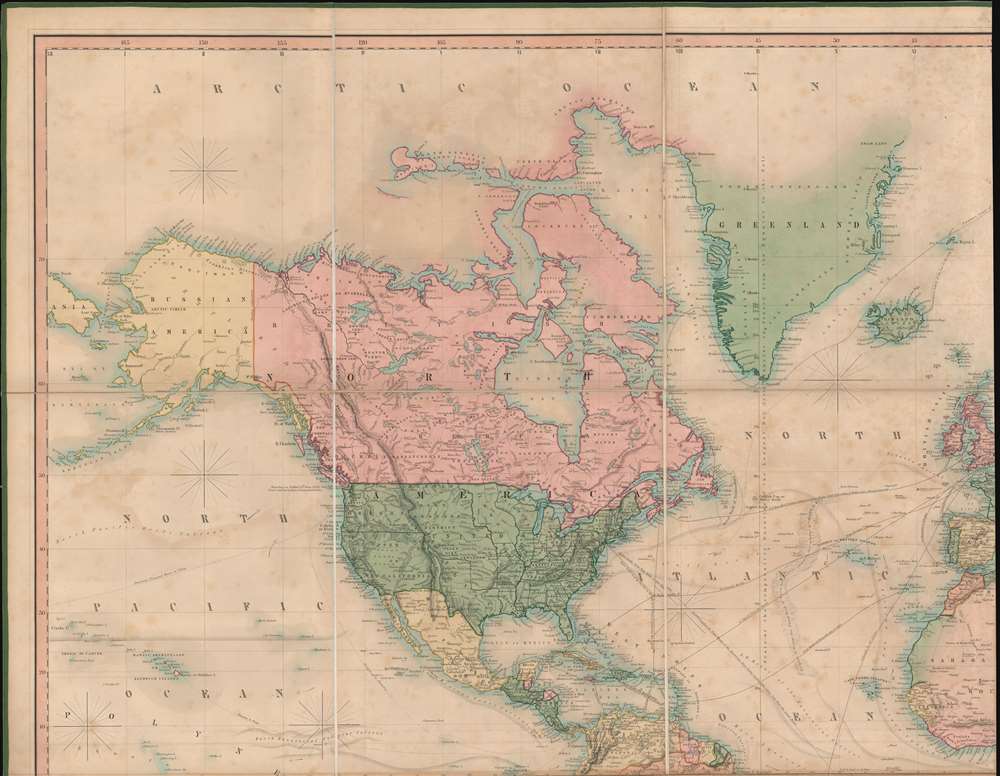 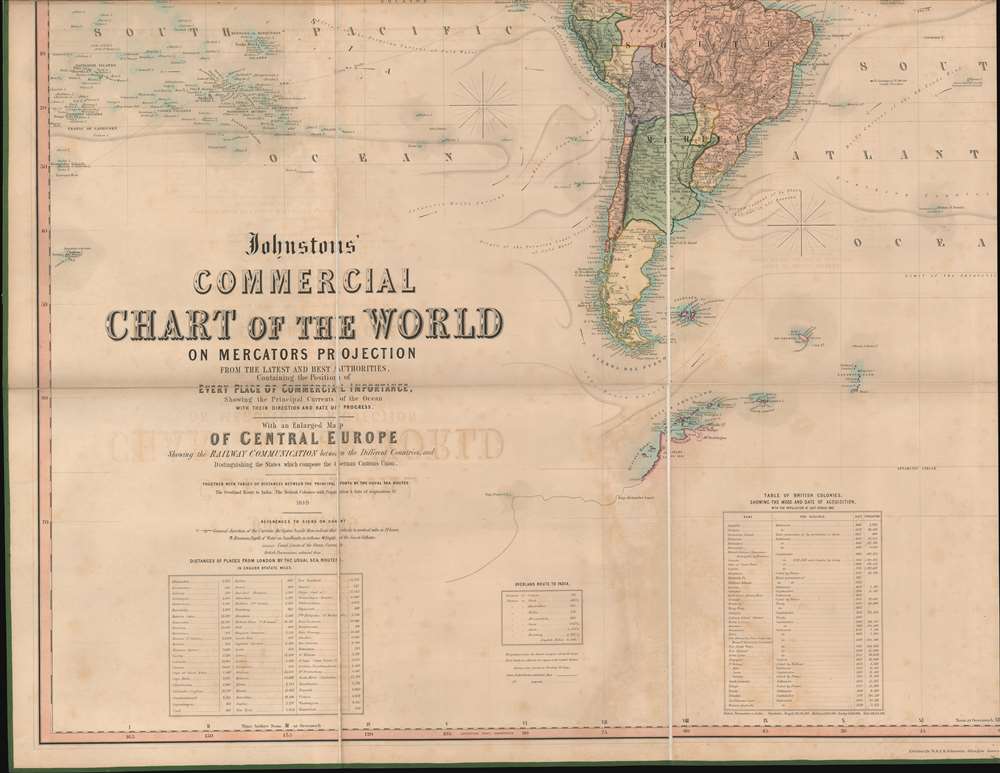 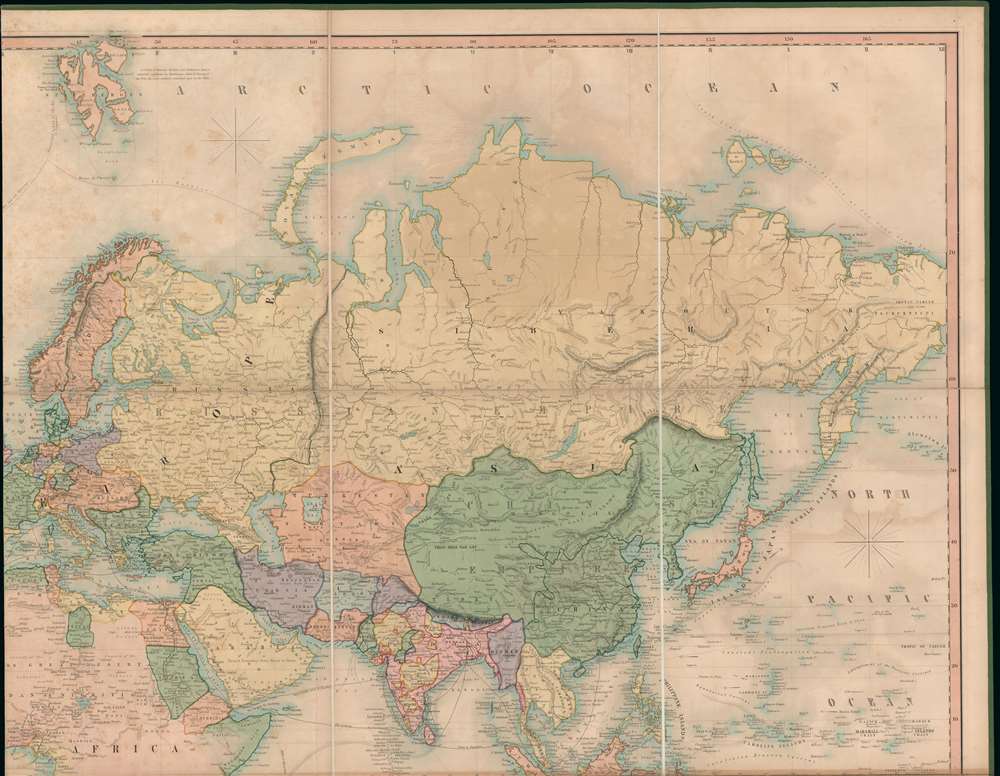 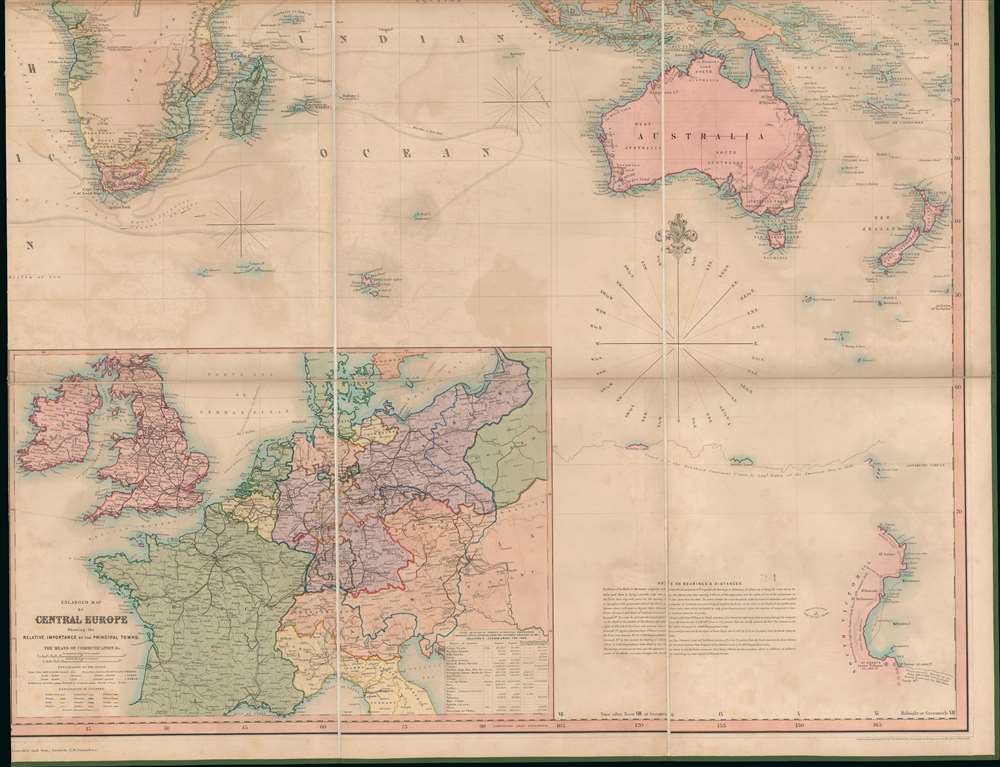 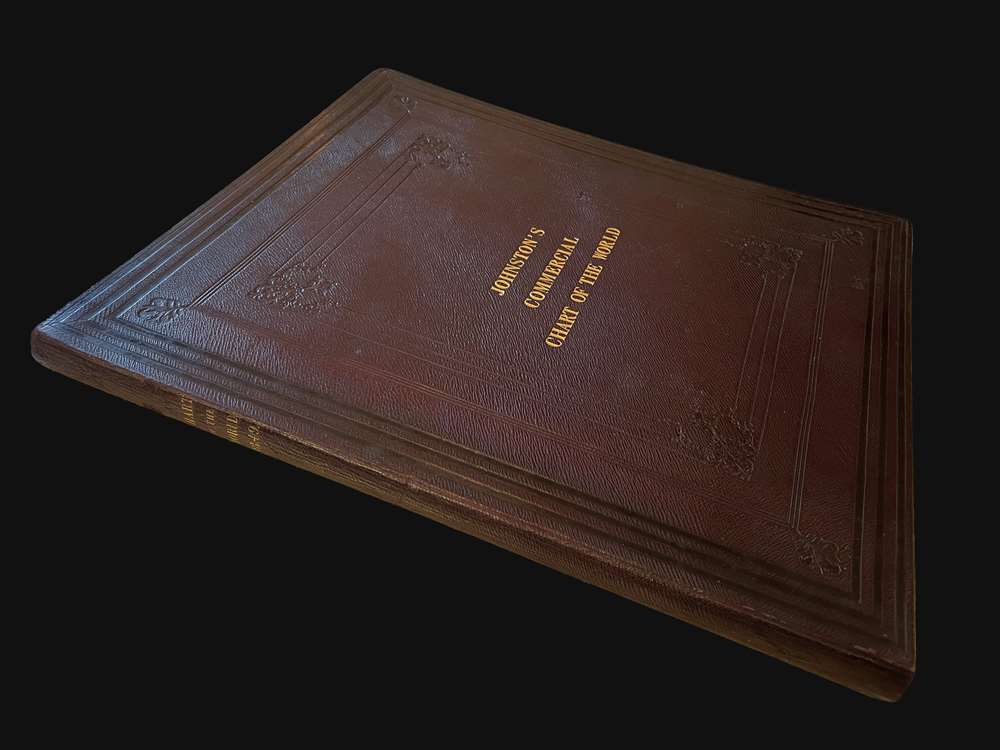 Johnstons' Commercial Chart of the World on Mercators Projection from the latest and Best Authorities Containing the Position of Every Place of Commercial Importance, Shhowing the Princial Currents of hte Ocean with their Direction and Rate of Progress. With an Enlarged Map of Central Europe Showing the Railway Communication between the Different Countries, and Distinguishing the States which compose the German Customs Union.
1849 (dated)     56.25 x 72.75 in (142.875 x 184.785 cm)     1 : 30000000

A very impressive large scale first edition example A. K. Johnston's 1849 map of the world made for trade and commerce. Issued at the height of the British Empire, the map is appropriately centered on the London meridian. The focus is trade and commerce, with global shipping lanes and times noted throughout, as well as caravan routes through Africa and Asia, wagon routes through North America, and steam packet routes. A large inset in the lower right focuses on the railways of central Europe and, interestingly, the German Customs Union. In terms of size, detail, style, and composition, we surmise Johnston must have issued this map to compete with the lucrative Teesdale franchise, who had been issuing similar large scale 'commerce' maps since 1837.

The map has much to offer, not only in terms of fine engraving, color, and grandiosity, but also for its superlative detail.

North America and the United States conforms to the situation at the end of the Mexican American War (1846 - 1849). Texas is illustrated at its fullest, with boundaries extending well into modern-day Wyoming and west as far as Santa Fe. Further west, Sutter's Fort is noted, suggesting knowledge of the California gold discovery, but when this map was engraved, the mad rush had yet to occur. Instead, the focus is the fur trade, including overland and shipping routes bypassing San Francisco for Astoria - then the major hub of trade on the west coast. This area was formally ceded to the United States in 1846 - ending the Oregon Question, but in 1849, busy Columbia River ports remained just as important to British and Canadian trappers operating out of British Columbia, as to Americans in Oregon Territory.

When this map was issued, Africa remained explored only along the coast and major river systems, with much of the interior unknown. Nonetheless, Johnston makes a great effort to map trade routes throughout the Sahara, including major routes from centers in Fezzan, Morocco. and Tripoli to oases and salt mines in the southern desert. He names individual oases, holy sites, and caravan stops with greater accuracy than we have seen in any comparable world map. Further south, ghosted in river systems offer the first hints of Lake Malawi - perhaps from local reports?

In Asia, attention is lavished on India and China, both of vital importance to British global trade. While India is a well-mapped mosaic of kingdoms and protectorates, China is a massive green block extending from Tartary to Sakhalin, including all of Korea, Manchuria, Mongolia, and Taiwan. Shipping routes focus on connections between Bombay, Singapore, Hong Kong, Guangzhou, and the Pearl River Delta. Trans-Pacific routes include an 'American Proposed Route' linking Astoria with Hong Kong.

Railroad commerce dominates Europe. There is even a large inset focusing on central Europe and in particular the German Customs Union. The Zollverein, as the Customs Union is more commonly known, was organized in 1833 as a coalition of German states formed to manage tariffs and economic policies. By 1866, it included most German states. The Zollverein was the first instance of independent states consummating a full economic union without the simultaneous creation of a political union. This would have been particularly significant as this map went to the presses. The 1848 Springtime of Nations Revolutions rocked Germany and there was active talk of a Pan-German economic and political union, which had the potential to transform Germany into an powerhouse capable of undermining British trade.

This is the first edition, published and engraved in Edinburgh by W. and A. K. Johnston. It was co-published in Glasgow by Hames Lumsden and Son, and in London by T. W. Saunders. We have noted later editions, and some wherein the title is changed to 'Commercial and Library Map', but none earlier, suggesting the present example is the first edition. We see no other surviving examples of this edition, and no citation in the OCLC.

Very good. Some offsetting. Wear and toning on some old fold lines. Dissected and laid on original linen, in original stamped leather binder. Stable.
Looking for a high-resolution scan of this?