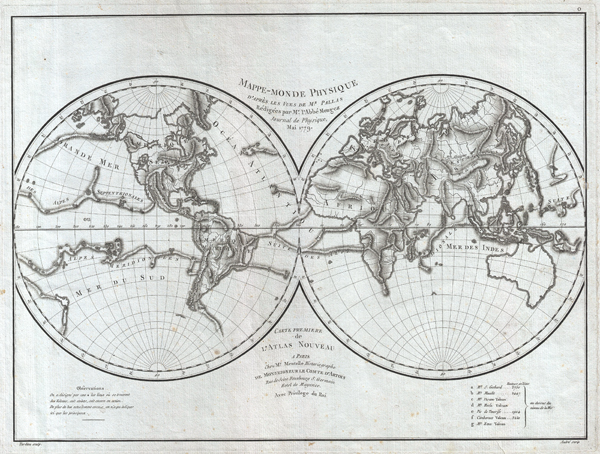 This is a highly unusual 1779 map of the world exhibiting a very peculiar physical topography that reveals mountain ranges both on land and under the sea. The curious undersea mountain ranges displayed here was drawn by Abbe Mongez to illustrate the geographical theories of Peter Simon Pallas, a German polymath living in Russia, who speculated that mountain ranges originated from a series of interterrestial explosions (volcanoes), many of which are noted on the map as asterisks.

Aside from Pallas's unusual marine topography, this map follows many of the speculative cartographic conventions of the late 18th century. These include the presence of a large inland sea in the western part of North America, a series of navigable channels in modern day Canada (harkening to the mythical Admiral De Fonte's journals), and a mountainous Nile source in Africa. Van Diemen's Land or Tasmania is attached to the mainland of Australia. A southern continent is only tenuously suggested by two speculative landmasses shown in the southern Indian Ocean and just south of Tierra del Fuego.

This map was first drawn by Abbe Mongez, then engraved by Ambrose Tardieu for inclusion as title plate, number 0, or folio 1 in Mentelle's 1779 Atlas Universel

A curious side note. The Abbe Mongez, who drew this map, was the geologist and naturalist on La Perouse's ill-fated expedition to the Pacific. The Perouse expedition shipwrecked in 1788 on the island of Vanikoro and, after living on the island for a short time, vanished entirely. Recently the remains of the Perouse wreckage, including a mysterious skull, were discovered on the Vanikoro reefs. Forensic scientists have reconstructed the facial features of the skull which many believe to be none other than the Abbe Mongez.

National Library of Australia, MAP RM 2051.
Looking for a high-resolution scan of this?