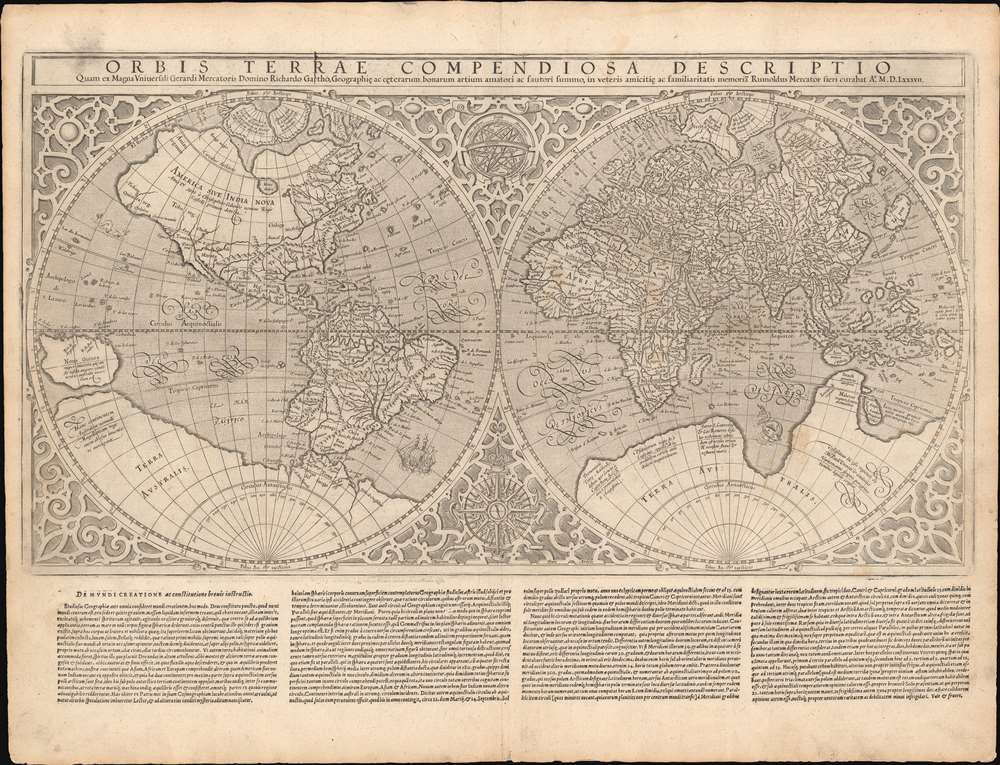 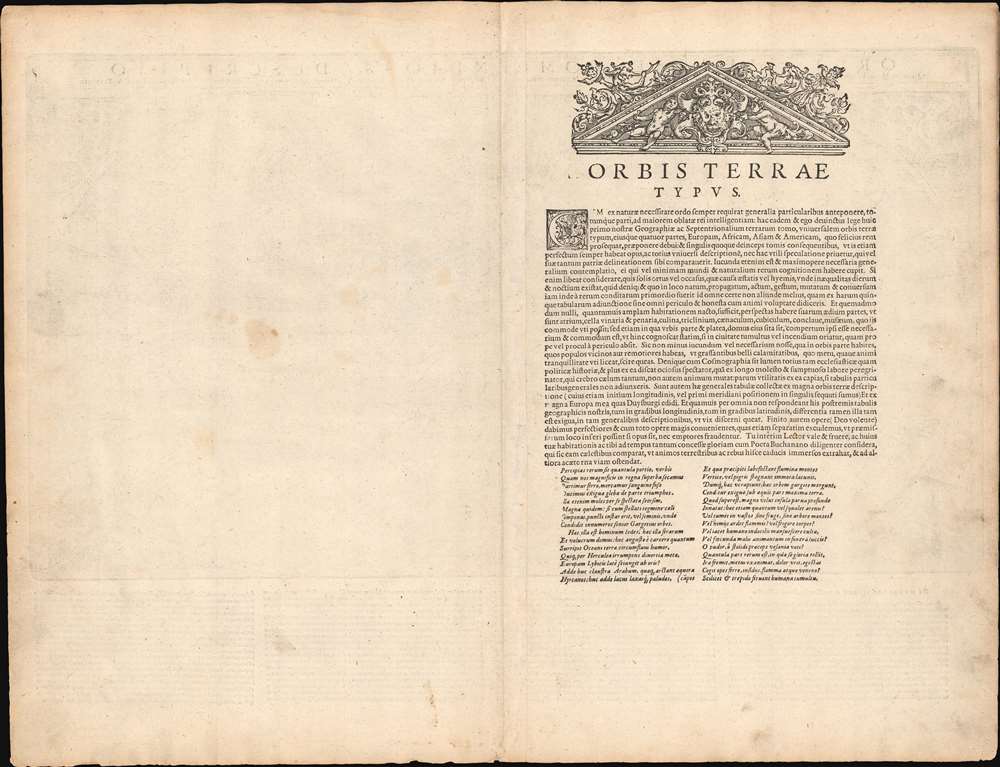 This is Gerard and Rumold Mercator's 1587 double-hemisphere map of the world, in a handsome, untrimmed example in its first atlas edition. It is the only acquirable world map directly associated with the elder Mercator (his 1578 world map depicts only Ptolemaic knowledge). The map was executed by Gerard Mercator's son, Rumold, using a novel double-hemisphere format rather than his father's famous projection. The complex mathematics used to make the Mercator Projection may well have overtaxed Rumold's abilities - although it seems likely that the elder Mercator would have at least had some role in the production of this work: he was alive when it was completed and made its appearance in the 1587 Strabo. Whatever the reason for this decision, Maps using the Mercator Projection would not appear again for many years, but even so, the elder geographer's stamp is undeniable.

Mercator's four polar Islands are here on full display in their earliest form. With limited evidence from actual exploration, Mercator compiled now lost Arthurian histories, the accounts of John Davis and Martin Frobisher, whaling reports, the fictional explorations of the Zeno Brothers, and reasonable scientific speculation relating to observable currents and magnetic variation to derive a novel Arctic geography. He imagined four large islands surrounding an open Polar Sea, which could be accessed only by four great rivers called the 'inrushing waters'. The currents of these, all of which flowed northwards, were so great that no ship once caught could escape. In the midst of the Polar Sea, he imaged a mighty maelstrom surrounding a high pinnacle of black rock - the Rupes Nigra. To these islands he ascribed populations, including an all-female tribe of pygmies, derived from actual encounters with the Lapland Inuit, who are indeed of small stature and whose men often leave en mass on extended hunts. Mercator's schematic for the high Arctic remained dominant until the early 17th century until the discovery of Spitzburgen generated undeniable conflicting cartography.

A massive Terra Australis dominates the Southern Hemisphere, extending from Tierra del Fuego nearly to New Guinea. This imaginary continent capping the South Pole was long supposed to exist by European geographers despite the lack of any evidence to support the notion. It was thought, based upon the writings of Aristotle, that the globe was a place of balances and thus geographers presumed the bulk of Eurasia must be counterbalanced by a similar landmass in the Southern Hemisphere. Many explorers in the 16th and 17th centuries sought the Great Southern Continent, including Quiros, Drake, and Cook, but Antarctica itself was not truly discovered until Edward Bransfield and William Smith sighted the Antarctic Peninsula in 1820.

Far to the north, Mercator's map displays what might be its most influential feature: the open Arctic Sea passage winding its way around the globe. These are the much sought-after Northwest (to the north of America) and Northeast Passages (over Asia). It was hoped that high-latitude maritime routes or 'passages' would provide quick access to the rich markets of Asia, which offered both an outlet for European silver and furs from the American colonies, as well as produced spices, silks, and other trade goods coveted in Europe. When Mercator included this on his map, no one had successfully navigated such a passage, but many scholars argued that it must exist. Countless explorers lost their lives in search of the apocryphal routes. Today, with the advent of global warming reducing the size of the Polar Ice Cap, a navigable passage has indeed formed.

Mercator's geography was among the most decisive maps in proposing that Asia and North America were not connected. This was hinted at in the works of Waldseemüller and Münster, but the acceptance of the idea was far from universal: maps by Fine, Gastaldi, Ruscelli, and others showed Asia and America as a contiguous land mass well into the 1570s, after the printing of Mercator's 1569 wall map. Ortelius swiftly adopted Mercator's model in his atlas' maps, and it is arguably them that provided the most leverage in making this model standard - despite the lack of actual evidence of a separation of the continents. Such knowledge was not confirmed until the late 18th century navigations of Captain Cook.

Rumold Mercator engraved this map and first printed for the 1587 Duisberg edition of Strabo's Rerum geographicarum libri XVII. It was then included in editions of Mercator's Atlas Sive Cosmographicae Meditationes De Fabrica Mundi et Fabricati Figura from the first edition of 1595 (this example). It remained in the Mercator/ Hondius atlases until 1630. This example, with the four columns of recto text, conforms to the 1595 first edition of the Mercator Atlas. While the map is relatively common in its later printings, the 1595 and 1587 editions of the map are rare. We see examples of this edition catalogued in the Universitatsbibliothek Eichstatt, the State University of New South Wales, and Yale University.


Rumold Mercator (1541 - December 31, 1599) was a Dutch cartographer, son of the famous cartographer Gerard Mercator (1512 - 1594), and the caretaker of his illustrious father's work. He began producing maps prior to his father's 1594 death, and completed much of his work that was left unfinished. He would publish, supplemented with his own maps, Gerard Mercator's incomplete Atlas in 1595. This work would include his 1587 world map, and continental maps by his nephews Gerardus Mercator junior and Michael Mercator - using the elder Mercator's world map as their source. Rumold lacked his father's genius and passion for mapmaking and under his leadership, and faced with competition from Ortelius, the firm declined until his own 1599 death. Afterwards, the Mercator map plates were acquired by Henricus Hondius II (1597 - 1651), who republished them extensively, re-establishing Mercator's position as the premier cartographer of the Dutch Golden Age. Learn More...

Mercator, G. and Heirs, Atlas Sive Cosmographicae Meditationes De Fabrica Mundi et Fabricati Figura. (Duisberg: Rumold Mercator) 1595.     Mercator's Atlas is one of the most important works in the history of cartography. Although in fact Ortelius was the first to publish a proper atlas, the Teatrum Orbis Terrarum, Mercator's Atlas the first book to employ the term Atlas for a collection of maps. The term is derived both from the mythical titan, Atlas, who was forced to bear the world upon his shoulders, and the Libyan king, philosopher, and astronomer of the same name that, so the legend goes, constructed the first globe. Mercator dedicated the final 25 years of his life to compile the Atlas. He published two parts during his lifetime in 1585 and 1589, but the final part published posthumously by his son Rumold Mercator, in 1595. The map plates for the Atlas were later acquired by Jodocus Hondius who published the most complete and well known edition in 1606. It was Jodocus who popularized the Atlas and who did the most to elevate Gerard Mercator's work.