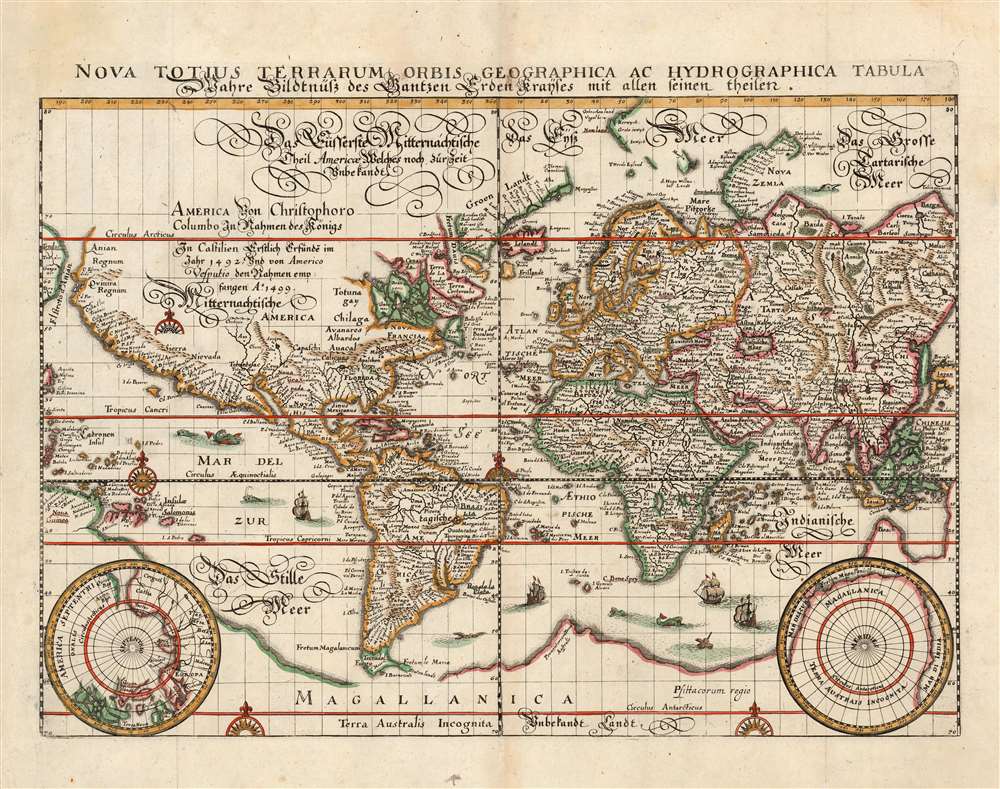 Attractive map on the dominant projection of the early 17th century.

This is a scarce 1646 map of the world on the Mercator Projection, produced for inclusion in the 1646 edition of Matthias Merian's Neuwe Archontologia cosmica. It is a meticulous and beautiful reduced version of Blaeu's similarly-titled 1606 map, which remained the dominant depiction of the world using that projection - appearing in all of Blaeu's successful atlas editions up through the 1640s. While this map does not retain the decorative borders of its source, the cartographic detail is reproduced faithfully, including the polar projections in the lower corners.

The map exhibits the apocryphal southern continent of Terra Australis, presumed to exist based upon ancient Aristotelian philosophical speculation regarding geographical balances. It illustrates Korea as an Island. The strait of Anian is identified between Asia and America. In Africa, the map follows Ptolemaic speculation regarding the sources of the Nile, mapping two speculative lakes in southern Africa. Both Lake Parima (Manoa) and Laguna de Xarayes (Lacus Eupana), fictional locations of El Dorado, appear in South America. In North America, the cartographer maps the supposed Seven Cities of Gold, noted here as 'Septem Citao' - a legend dating to the saga of Álvar Núñez Cabeza de Vaca, the discoveries of the conquistador or Francisco Vázquez de Coronado, and ancient Portuguese legends relating to the Moorish invasion of Iberia.

Despite a plethora of geographical confusions, the map genuinely attempts to embrace the most up to date cartographic information. The Straits of La Maire, discovered by Jacob Le Maire and Willem Schouten in 1616, appear just to the east of Tierra del Fuego - which is now correctly an island. The discoveries of Martin Frobisher and John Davis's expeditions in search of the Northwest Passage in 1576 - 1587 appear in the Canadian Arctic. There is as yet no trace of the Great Lakes or Hudson Bay. The seas around Nova Zembla, in the Russian Arctic, are mapped according to the discoveries of Willem Barentz made between 1594 and 1597. A large promontory south of Java identified as 'Beach' bears a striking resemblance to northern Australia's Arnhem Land and the Gulf of Carpentaria, despite the fact that Australia had not yet been discovered. 'Beach' itself is a reference from Marco Polo's narratives.

This map was executed in 1646 for inclusion in Matthias Merian's Neuwe Archontologia cosmica, a German translation of Pierre d'Avity's 1616 Les Estats, empires, et principautez du monde. The first, 1638 edition of Merian's work contained a very similar map, but for unknown reasons a new plate was required for later editions. The new plate was a close copy of the first, with minor typographical changes in the lettering, and lacking only Merian's imprint. This may indicate that this later plate was engraved by a different hand. We identify about ten examples of later editions of Merian's Neuwe Archontologia cosmica in institutional collections, and six examples of this separate map.


Gerard Mercator (1512 - 1594) is a seminal figure in the history of cartography. Mercator's calculations and map designs redefined the 16th century concept of cartography and were the first to break away from the Ptolemy model. Many of his systems of measurement, such as the Mercator Projection, are still in use today. Despite his prominence as a cartographer, he started his career as a crafter of scientific instruments. He did not construct his first map until 1540, when he made two maps, one of Flanders and another of Palestine. These two impressive works earned him the patronage of the Emperor Charles V, for whom he construed a globe and several large scale maps. Despite this imperial patronage, Mercator was accused of heresy and in 1552 fled to Duisburg. In Duisburg he set himself up as a cartographer and began work on his revised edition of Ptolemy's Geographia. This three volume work was the first book to be called an "Atlas", after the Titan and King of Mauritania. Following Mercator's death his descendants took over his firm but languished because of heavy competition from the Ortelius firm. It was not until Mercator's plates were purchased and republished ( Mercator / Hondius ) by Henricus Hondius and Jan Jansson that Mercator's position as the preeminent cartographer of the age was re-established. Learn More...