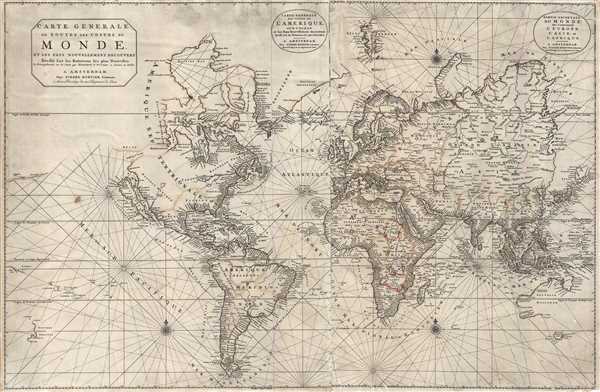 Large early nautical chart of the world showing Californai as an island and embryonic Australia.

This is Pierre Mortier's 1703 large format nautical chart of the world on a Mercator Projection. Centered on the Atlantic, this impressive chart covers the entire world as it was then known. Rhumb lines appear throughout and the coastlines are heavily labeled while inland is only loosely detailed. The map includes such interesting elements as an insular California, large inland glacial sea in North America, Witsen's curious cartography in northeast Asia, and partial embryonic mappings of Australia, New Zealand, and Tasmania.

This map is cartographically influenced by Hubert Jaillot's 1693 world map. It was expertly re-engraved in Amsterdam in multiple languages and republished in Dutch editions of the Neptune François. Around 1703 the map was updated by Baltasar Ruyter to include the influential c. 1692 cartography of Nicolaes Witsen as regards north and east Asia. This results in a significant expansion of Asia such that it nearly touches upper right cartouche.

We begin our examination of the map with California in its insular form on the Luke Foxe model popularized by Nicholas Sanson in 1657. Luke Foxe was an English navigator who lead a 1631 expedition in search of the Northwest Passage. Although he had no luck in his hunt, his expedition lost no lives, which is a feat for early explores in Arctic waters. The maps associated with his expedition featured a surprising illustration of California in island form. It was Foxe who is credited with introducing the curious form of northern Insular California, including the Bay of Talago, and the unusual peninsula extending from the mainland, Agubela de Gato (both noted in this map), and the Rio de Estiete. The origin of this cartography beyond Foxe remains a mystery given that Foxe himself never sailed anywhere near California.

North of California the Strait of Anian give access to a 'Mer Glaciale' and thence to Hudson Bay - hopeful thinking which may owe some debt to the influential French cartographer Guillaume de L'Isle. The Mer Glaciale as seen here cannot help but invoke association with speculations on the 'Mer De L'Ouest,' an idea originally conceived of by Guillaume de L'Isle but popularized by Nicolas De L'Isle, Nicolas De Fer, and others. Although the borders are ghosted, the Glacial Sea connects confidently to Button's Bay, the Hudson, and ultimately the Atlantic. This is an evolution associated with the second state of the America sheet of this map and is novel departure from Pierre Mortier's other mappings of this region.

Further inland the Great Lakes appear in a highly embryonic form despite excellent earlier mapping by such well known cartographers as Coronelli. Here the Lakes appear as a singular inland sea, labeled 'Mer Douce,' itself more akin in form to c. 1565 mappings by De Bry than the cartography of the 18th century.

Asia drawn heavily on the cartographic advances of Dutchman Nicolaes Witsen. This is most evident in the coastline extending from Nova Zembla to Japan. In particular note the curious extension of land leading eastward from Siberia with the note that roughly translates to 'beyond this it is not known.' This oddity appears on numerous maps dating from the late 17th and early 19th century. It is a legacy of Peter the Great's obsession over the search for a Northeast Passage. Around 1648 the Cossack Semen Ivanovich Dezhnyov (1605 - 1673) put together a rough and ready expedition to explore the region. His company consisted of Fedot Alekseyev, traveling with the merchants Andreev and Afstaf'iev (representing the Guselnikov merchant house), who provided their own ship. Gerasim Ankudinov, an experienced sea captain with his own ship and some 30 men. Dezhnev, along with Mikhail Stadukhin recruit some 19 men of his own and procured a traditional Kocha ship. Including escort vessels, a total seven ships sailed from the mouth the Kolyma River, along the Siberian Arctic, to the Anadyr River north of Kamchatka, and in doing so became the first Europeans to sail through the Bering Strait some 80 years before Vitus Bering. Dezhnyov described rounding a large mountainous promontory Chukchi, Tschuktschi, or Chukotka Peninsula. Of the seven vessels the multiple leaders, only three ships, and Dezhnev survived the passage. His expedition was mostly forgotten outside of limited cartographic circles until Gerhardt Friedrich Muller discovered Dezhnyov's reports and in 1758 published them. Dezhnyov ultimately proved that there was indeed a nautical route from Russia to Asia, but at the same time confirmed that it was exceedingly impractical for trade. Nonetheless his promontory was subsequently embraced by European cartographers who, lacking serious scientific data from the Dezhnyov expedition, surmised the form. The first of these was Dutchman Nicolaes Witsen, who prepared a map in 1687 based upon Dezhnyov's records that he discovered on a 1665 trip to Moscow. Many cartographers follows suit, though some, like Mortier here, even went so far as to suggest that this landmass actually connected to America, and in doing so, both embraced and dismissed Dezhnyov, whose journey provided the first definitive proof that Asia was not connected to America.

Typically this map was issued both separately in dual panels, or joined as here, in a single large map - hence the multiple title cartouches. The individual plates exist in multiple states are often mix and matched. Here the left side of the map, the Americas, follows state 2 of the 1693 edition, but the right side, Europe, Africa, and Asia, is fully updated to follow Witsen. A final edition appeared in 1730 bearing the Covens and Mortier imprint. All examples are quite rare.


Baltasar Ruyter (fl. c. 1680 - 1710) was a Dutch engraver active in the late 17th and early 18th centuries. His work is most commonly associated with Pierre Mortier, and the firm of his son Jean Covens and Cornielle Mortier (Coven's and Mortier). Little is known of his life. Learn More...