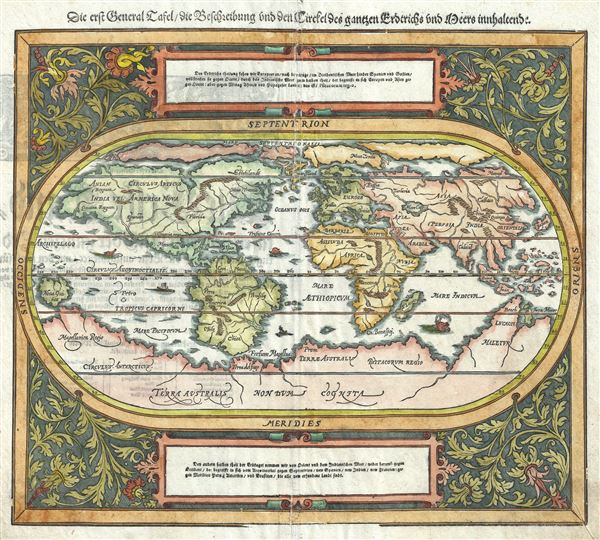 An impressive early map of the world.

An attractive example of Sebastian Munster's 1588 map of the world. Munster presents us with an expansive view the world with a number of interested cartographic features. Along the bottom of the map the dramatic unknown southern continent (Terra Australis Nondum Congnita) stretches to include the discovered lands of Tierra de Fuego and what appears to be a proto-Australia. South America bears the characteristic western budge in the vicinity of Chile that appeared on many early maps. The cartographer also maps a impressive and seemingly navigable northwest and northeast passages.

In North America Florida, had Nova Francia are identified as re they mythic kingdoms of Anian (from Polo) and Quivara. IN South America the Amazon River and the Rio de la Plata are clearly identifiable. Arica id drawn on th Ptolemaic model with the Nile terminating in two (I this case three) large lakes. The Niger, extending from the west, is separated from the Nile by an impressive mountain range. In Asia, Japan and the Chinese city of Quinsai are noted. The landmass that appears to represent some sort or Pre-discovery knowledge of Australia is an amalgam of a misconstrued Java and legends from the diaries of Marco Polo.

The map is oval in form and surrounded by elaborate vine and leave engraving. German text appears above and below the map proper describing the lands contained. The verso contains German text describing the earth. The title appears over the map in German text of a Gothic ethic.

This 1588 map was engraved in woodcut and published in Basel by Sebastian Petri. After 1588, this map was only re-published in posthumous German editions of Sebastian Munster's Cosmographia issued in 1592, 1598, 1614, and 1628, and is thus rare.

Munster, S., Cosmographica, (Sebastain Petri, Basel) 1588.     The Cosmographia Universalis, one of the greatest geographical and historical works of the 16th century, 'taught nearly three generations of laymen most of what they knew about the world beyond their native places' (Strauss). Filled with maps, views, and rich descriptions of places throughout Europe and beyond, it was the best general source of geographical information until the advent of Ortelius' Theatrum. It was first issued by Sebastian Munster (1488 - 1552) in its 1544 German edition, and stayed in print long after its author's death in thirty five editions, and in five languages. (Of these, the 1550 and 1552 editions are widely regarded as the most complete and truest to the author's intentions: thereafter, later editors continued to add to the work's text; editions from 1588 onwards employed an entirely different set of maps produced on Ortelius' model.) Munster's goal, initially, was to rally his homeland's humanists and scholars to produce a new map of Germany in order to 'see what kind of a land our ancestors conquered for their home... bring honor to our country and place its beauties in the clear light of day.' Munster's project quickly expanded to cover the known world in its scope to produce a 'sufficiently large volume, in which I touch upon the foundation of all nations and kingdoms, their peculiarities, rivers, mountains, customs of men, royal successions, origins of the more important cities, succinct histories, religions, characteristics and fertility of lands... in Germany, however, I tarry a little longer.'.

Good. Some centerfold damage and repair.