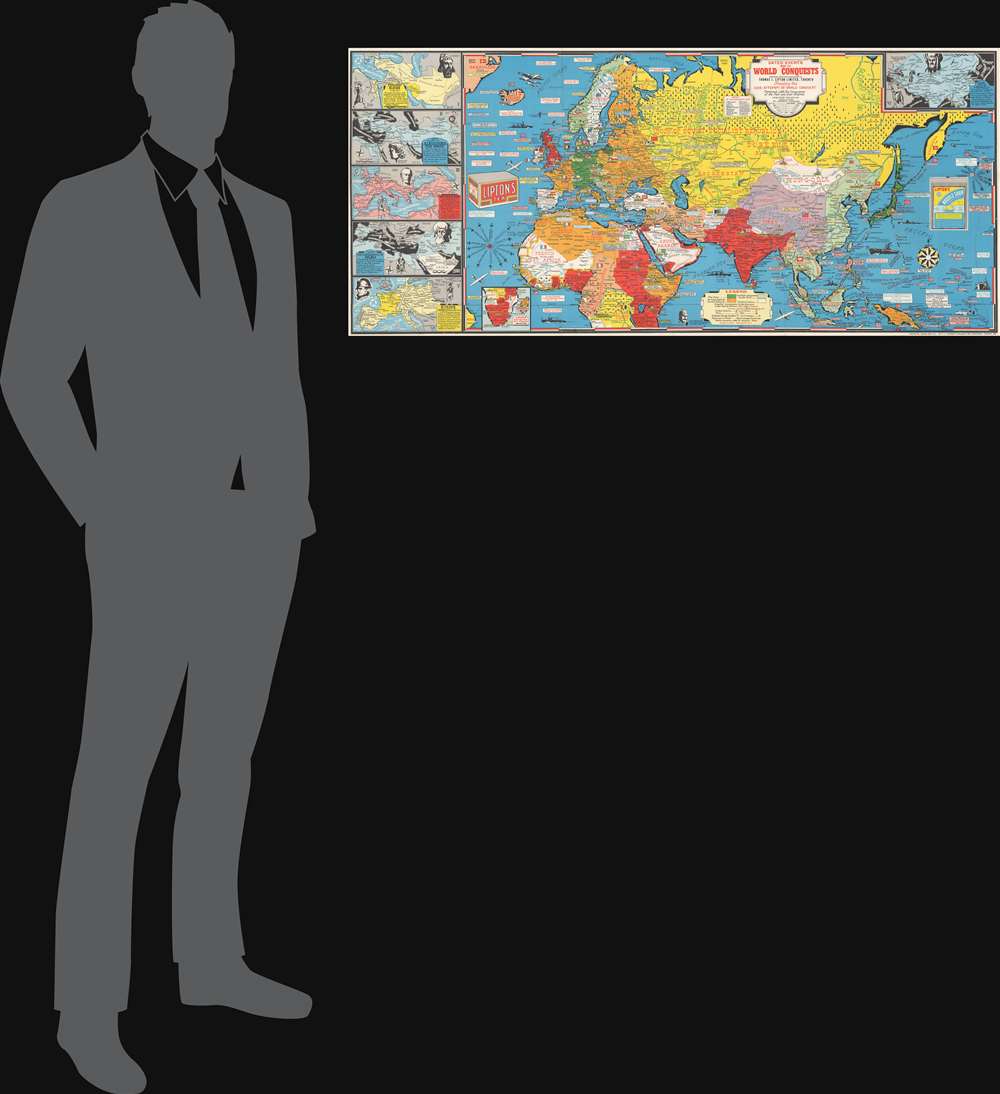 This 1944 Stanley Francis Turner map of Europe, Africa, and Asia illustrates the world on the eve of 1945, the final year of World War II (1939 - 1945). Text boxes scattered throughout chronicle important wartime events, including the D-Day invasion of France, the liberation of Paris, and MacArthur's return to the Philippines, along with numerous others. The United Nations are shaded red, while land controlled by the Axis is green. Light green areas (limited to Asia only) illustrate conquered areas still controlled by the Axis. Countries are labeled and bear their flag, while world capitals are marked by yellow banners and small icons of buildings. Illustrations of airplanes and warships dot the map. Aerial distance charts to Berlin and Tokyo also appear. A small inset along the bottom border illustrates southern Africa and Madagascar and uses the same color scheme to portray alliances.

Six insets (five along the left side and one in the upper right corner) illustrate the greatest extent of six historic empires. These are the Persian Empire, the Empire of Alexander the Great, the Roman Empire, the Conquests of Islam, Napoleon's conquests in Europe, and Genghis Khan's conquests in Asia. Each inset features a portrait of the empire's leader and a short, simple history of each empire.

Turner's wartime maps, with very few exceptions, were distributed by companies to their clients. The present example was 'Published with the Compliments of Thomas J. Lipton Limited, Toronto'.

This map was created by Stanley Francis Turner and publisher by C. C. Peterson in 1944. We note only one other cataloged example of this edition. It appears in OCLC and it is part of the collection at the University of Toronto. A second edition, the 'Victory Edition' is part of the David Rumsey Map Collection.

Stanley Francis Turner (1883 – 1953) was a visual artist and painter based in Toronto, Canada. Turner was born in Aylesbury, England. He studied art in London at the South Kensington School before migrating to Canada in 1903, where he studied at Ontario College of Art under George Reid and J. W. Beatty. Turner is best known as a painter and designer capable of working in a variety of mediums. During World War II, Turner took a contract with the Globe and Mail to illustrate pictorial maps of war events. Turner may have maintained the rights to his war maps, as he also seems to have had a contract with the advertiser and publisher, C.C. Peterson, also of Toronto, to publish and distribute his maps in the United States. Turner's maps are information dense and designed to illustrate the events of the war in an easily digestible pictorial format. Turner experimented with different ways of working with the cartographic ranging from simple Mercator projections to more contemporary equal-area projections. In 1930, Turner was elected an Associate of the Royal Canadian Academy of Arts. He died in Toronto in 1953. Learn More...


C. C. Peterson (fl. c. 1940 – 1950) was an advertising and publishing company based in Toronto Canada, but with distribution and licensing in both the United States and Canada. Peterson had contracts with the artist Stanley Francis Turner to publish pictorial 'war maps' during World War II. The company supplemented its income by selling advertisements on Turner's maps. Learn More...