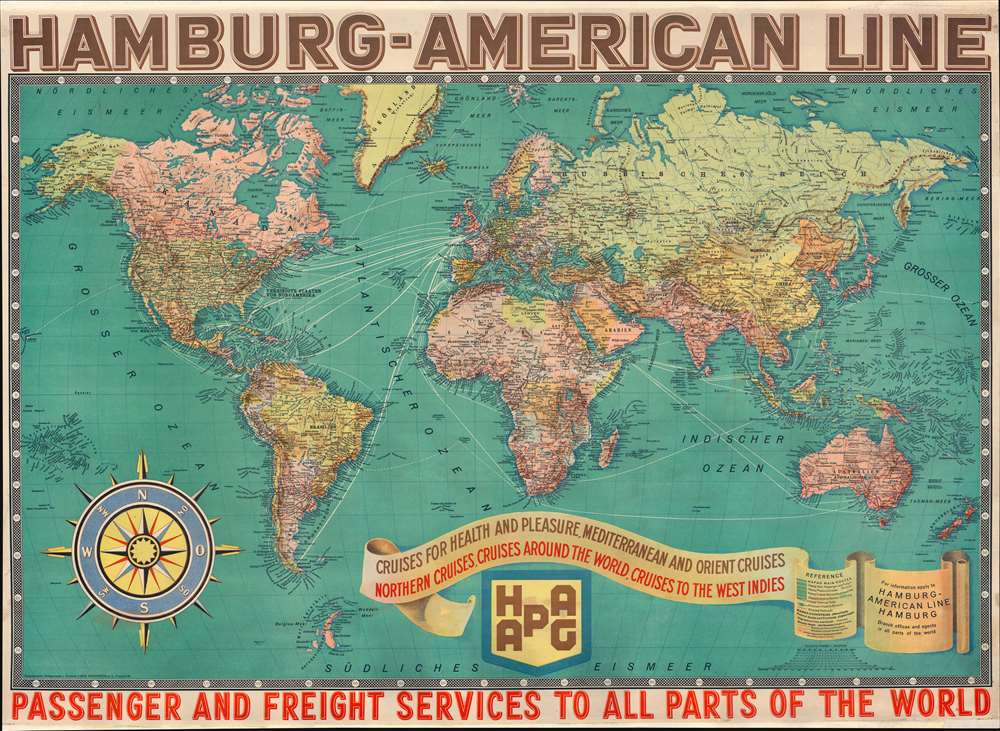 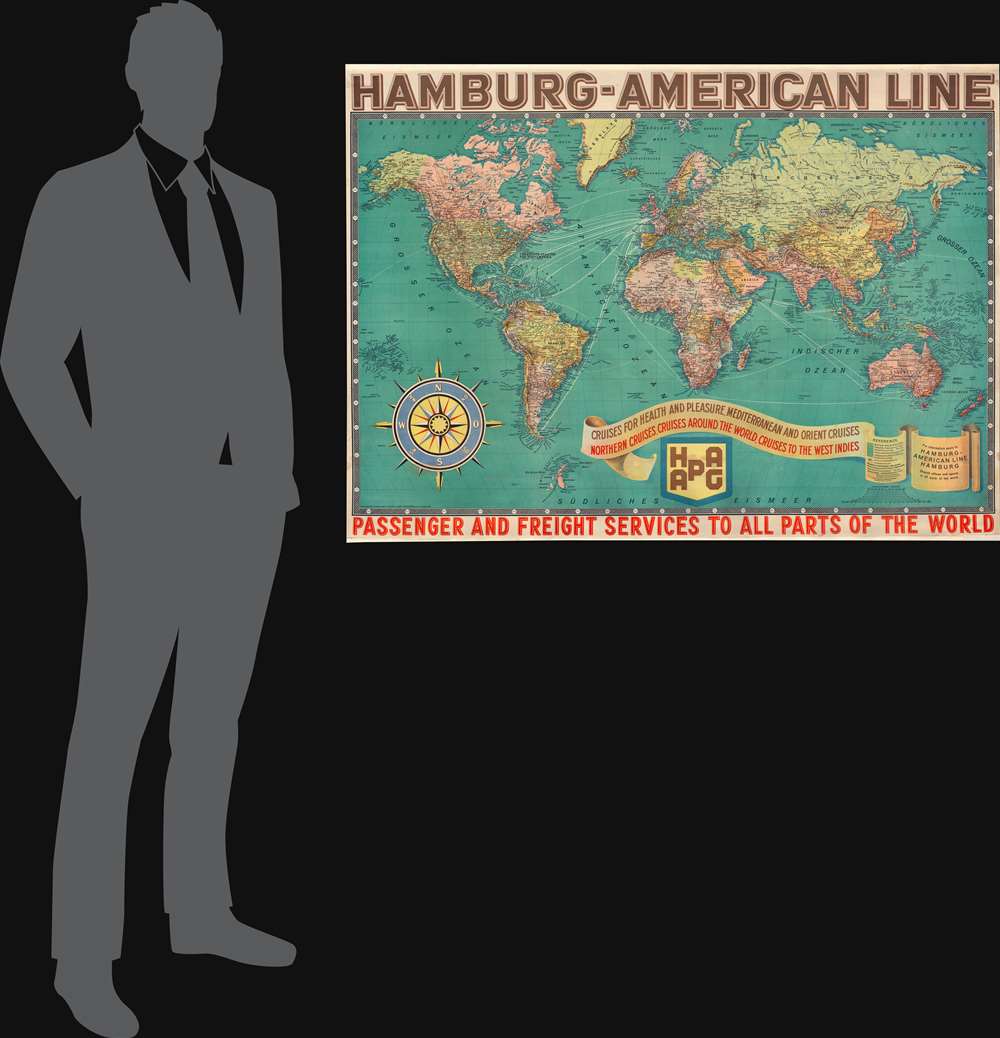 An impressive c. 1931 Interwar Period wall map of the world promoting the Hamburg-American Line (HAPAG). The map shows HAPAG shipping routes, as well as its pleasure cruise services, and, most interestingly its, Zeppelin Airship Services from Spain to Brazil - the first trans-Atlantic commercial air routes!

The map importantly notes the Cadiz-Pernambuco Zeppelin Route - the ephemeral first transatlantic commercial air route! Operated jointly by Hamburg-American and 'Deutsche Luftschifffahrts-Aktiengesellschaft' (DELAG), the route from Cadiz to Pernambuco and thence to Rio de Janeiro, is that of the LZ 127 Graf Zeppelin, the most famous Zeppelin after the Hindenburg. The Cadiz-Pernambuco Route was inaugurated in 1931, when the Graf Zeppelin made 3 voyages. It proved popular, connecting the wealthy German plantation elite in Brazil with Europe and offering luxury of an ocean liner and the speed of an airliner. The DELAG operated the Graf Zeppelin for a total of 64 round-trip voyages before most Zeppelin routes were abandoned in the wake of the May 1937 Hindenburg disaster.

Formally known as the 'Hamburg-Amerikanische Packetfahrt-Aktien-Gesellschaft' (HAPAG), the Hamburg-American Line was a transatlantic shipping enterprise established in Hamburg, Germany, in 1847. It was founded by Albert Ballin (1857 - 1918), a German Jew from a wealthy mercantile family. The company originally focused on connections between European and American ports - being the primary vector for German Immigration to the Americas in the second half of the 19th century. By 1914, HAPAG expanded its operations to a global shipping network, becoming the world's largest shipping line. Despite the loss of most of its fleet during World War I, HAPAG persevered, rebuilding in the Interwar Period (1918 - 1939) - even expanding into Zeppelins. During World War II, the HAPEG's interests took another hard hit, with most of their fleet seized or destroyed. After the war, they once again rose from the ashes. In 1970, the company merged with its longstanding rival, Norddeutscher Lloyd of Bremen, to establish the present-day company Hapag-Lloyd.

This map is undated, but the presence of the ephemeral Graf Zeppelin route to Pernambuco and Rio de Janiero, and a proposed ongoing route to Buenos Aires, solidly dates it to 1931 or 1932. The map was printed for Hamburg-American by 'Geographische Verlagsanstalt und Druckerei Ludwig Ravenstein A.-G., Frankfurt am Main'. Rare. There is no known record of another example this map in the OCLC or otherwise online.

Ravenstein's Geographische Verlagsanstalt (1830 - 2001) was a German publishing house based in Frankfurm-am-Main throughout the 19th and 20th centuries. It is considered the 2nd oldest continuously opperating printing house in Germany. The firm was founded in 1830 by Friedrich August Ravenstein (1809 - 1881), a former apprentice of publisher and bookseller Carl Christian Jügel (1783- 1869). Ravenstein's Geographische Verlagsanstalt (RGV) work initially consisted of travel maps, but soon moved into to mountaineering and topographical cartography. Friedrich August initially intended to pass the business to his eldest son, Ernst Georg Ravenstein (1834 - 1913), but Ernst emigrated to England in 1851, likely to avoid fallout from the failed Springtime of the Peoples Revolutions (1848 - 1849), where he set up a separate publishing business. In 1866, the RGV instead passed to Friedrich August's second son, Ludwig Christian Ravenstein (December 11, 1838 - April 18, 1915). Under Ludwig, in 1926, the firm briefly converted into a joint stock company, publishing as 'Geographische Verlagsanstalt und Druckerei Ludwig Ravenstein A.-G., Frankfurt am Main'. THe firm published under this name until about 1932, when they reverted to 'Ravenstein's Geographische Verlagsanstalt'. Ludwig managed the firm until about 1896, when his son Anton Simon Hans Ravenstein (1866 - 1934) took over. The firm next passed to Ernst Ravenstein II (1891 - 1953), son of Simon Ravenstein (1844 - 1933), the youngest son of Friedrich August Ravenstein, took over management in 1925 after graduating from the Technischen Hochschule in München. Eranst II passed the firm to his daughter, Helga Ravenstein (1919 - 1995) in 1955.The firm remained in the Ravenstein family through both World Wars, but was ultimately sold to Haupka GmbH in 2001. Learn More...

Good. Some edge and margin wear. Laid down on original linen.
Looking for a high-resolution scan of this?