1852 Blackwood Map of the World in Hemispheres 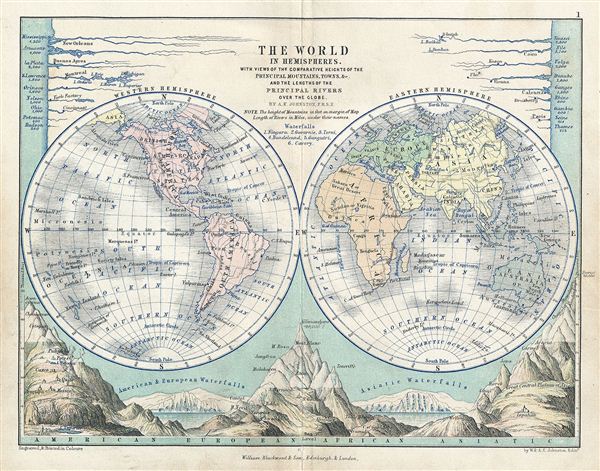 1852 Blackwood Map of the World in Hemispheres

This is a fine example of Blackwood's 1852 map of the world in hemispheres. It depicts the Western and eastern Hemispheres with countries named, but their borders not depicted. The bottom portion of the map depicts the comparative heights of the principal mountains, towns, and the major waterfalls in America, europe and Asia. Along the left and right margins, the lengths of the principal rivers in each hemisphere are depicted. Various cities, towns, rives, islands and several other topographical details are noted. This map was drawn by A.K. Johnston F.R.G.S and published by William Blackwood and Sons to be issued as plate no. 1 in Atlas to Alison's History of europe.

Blackwood and Sons (fl. 1804 - c. 1900) published out of Edinburgh and London throughout the 19th century - roughly from 1804 to 1898. The founder of the firm Scotsman William Blackwood (November 20, 1776 - September 16, 1834), was of humble origins, but his business acumen and dedication to the printing trade pushed his firm to prominence. He is most noted for publishing Blackwood's Scottish Magazine, one of the most important early magazines of 19th century England. In addition to his career as a prominent publisher, Blackwood took an active interest in civic matters and was elected Commissioner of Police in 1828. Following his death the firm was taken over by his sons, Alexander, John, and Robert Blackwood, who changed the imprint to "Blackwood and Sons". The firm was subsequently passed down through the heirs, most of the Blackwood name, until the late 19th century.


Alexander Keith Johnston (December 28, 1804 - July 9, 1871) was a Scottish cartographer and map publisher active in the middle portion of the 19th century. Johnson was born at Kirkhill, near Edinburgh, Scotland. He studied at the University of Edinburgh where he apprenticed as an engraver. Around 1826, in partnership with his brother William, he founded a cartographic printing and engraving firm with the imprint "W. and A. K. Johnston." Johnston made a name for himself in educational geography, publishing numerous maps for use in schools. His brother, William Johnston, eventually left the firm to pursue a career in politics, eventually becoming the Lord Provost of Edinburgh. Alexander's son, who would bear the same name, became a geographer and explorer, suffering an untimely death on the Royal Geographical Society's 1879 expedition to Lake Nyasa.

Very good. Blank on veros. Minor wear on original centerfold.
Looking for a high-resolution scan of this?