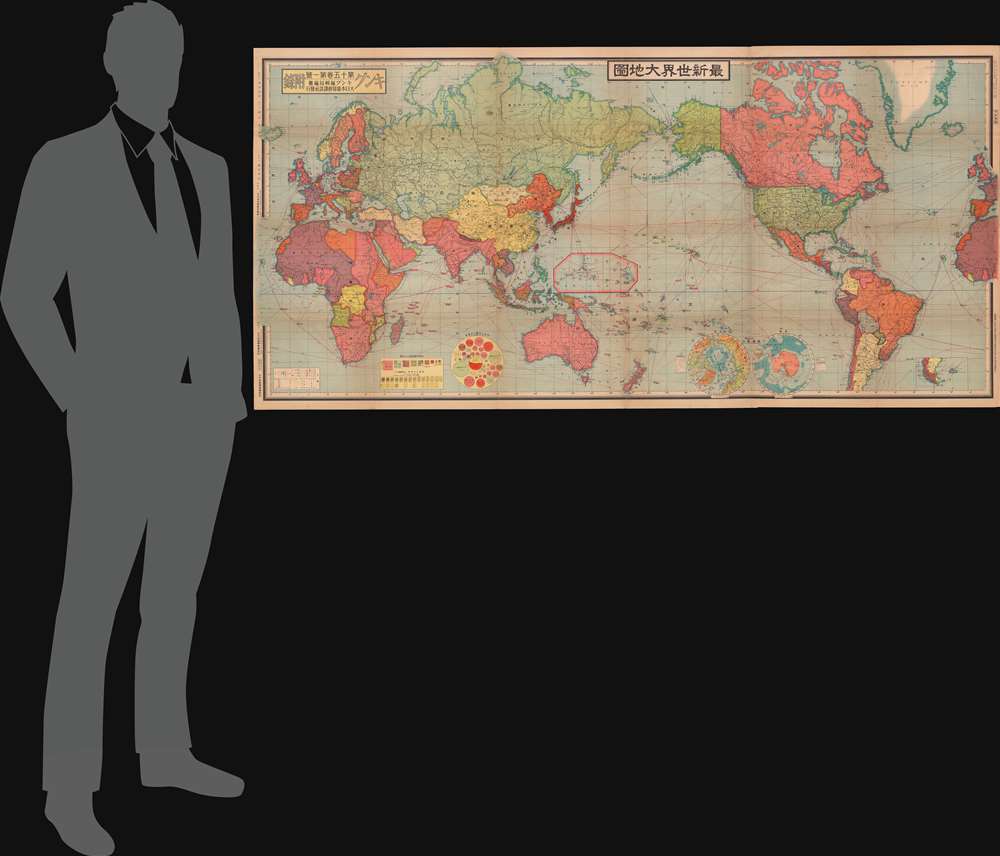 Japanese global perspective on the eve of World War II.
$950.00

This is a fascinating 1939 world map published by King magazine (キング) reflecting a Japanese perspective on geopolitics on the eve of World War II. The verso (back) includes two maps: one is a detailed map of China and Northeast Asia, where Japan was embroiled in a full-scale war, and the other is a map of Europe soon after the German occupation of the Sudetenland and the signing of the Munich Agreement.

This map reflects Japan's geopolitical and military concerns, above all in East Asia. The Japanese puppet state of Manchukuo (滿洲國) is noted on the map, as is the Mengjiang United Committee (J. Mōkyō, 蒙疆聯合委員會), which became the Mengjiang United Autonomous Government the following year, even though no countries in the world aside from Japan recognized these entities. 'Outer Mongolia' is only reluctantly, parenthetically, referred to by its official name, the Mongolian People's Republic. Prominently demarcated by a red outline near center is the Japanese South Seas Mandate: German colonies that had been granted to Japan at the end of World War I and which soon would see battles between Japanese and Allied forces in the Pacific War.

Insets show the North and South Poles. The graph with circles at bottom illustrates Japan's trade with various foreign countries. The graph with boxes shows the population density of Japan and various other powers, including both the home country and colonial possessions. The legend lists a set of geographic, political, and transportation features. The map is particularly keen to indicate shipping routes, including Japanese shipping routes in darker, thicker red lines and other shipping routes in thinner, lighter red lines. One final interesting characteristic is the modifications done to fit in various landmasses, including an inset at bottom-right showing Patagonia, and Iceland, western Africa, and western Europe intruding into the margins. With the international date line as the center of the map, western Africa and western Europe are reproduced on both sides, presumably to show their proximity to the Americas at right.

The verso maps also reflect the wartime situation, with a more detailed map of China at right (支那全土並に附近大地圖, scale 1 : 5600000) and a map of the situation in Europe at left (歐洲現勢大地圖, scale 1 : 12000000). Soon before this map was produced, Nazi Germany had occupied the Sudetenland in Czechoslovakia, explaining the inset map accompanying the map of Europe showing the distribution of different ethnic groups in Czechoslovakia. A table also lists the major alliances and negotiated treaties among European countries and a brief summary of their contents.

The War in Asia

By the time this map was produced, Japan had been engaged in a full-scale war in China (the Second Sino-Japanese War) for two and a half years. Despite a string of early victories, Japan was reaching the limits of its ability to occupy China, encountering both stiff opposition in pitched battles and a countryside roiled by insurgency. As Chinese forces under Chiang Kai-Shek, based in Chongqing, were unable to launch a comprehensive counterattack, the war entered a grinding stalemate as Japan tried to establish a legitimate alternative to Chiang (settling on one of Chiang's lieutenants, Wang Jingwei 汪精衛, in 1940) and cut off Chiang's supply lines, a strategy which eventually led them into French Indochina and increasing confrontation with the United States.

The fairly crude inset world map at bottom-right (世界防共現勢圖) reflects Japanese propaganda about the war in China as part of a global anti-Communist effort. The map lists anti-communist countries (防共國家) such as Imperial Japan, Nazi Germany, and Fascist Italy in black, and those aligned with them in grey, while also noting neutral countries, communist countries (the Soviet Union, Mongolia, and part of Xinjiang, where Soviet influence was strong), and 'reddening' countries (including the U.S. and U.K.).

King (キング) was a monthly general interest magazine published from 1924 through 1957 by Dai Nippon Yūbenkai Kōdansha (大日本雄辯會講談社, now known simply as Kōdansha). It was one of the most important magazines in Japan in this period, and its wide range of material combined with a readership that cut across typical class and geographical divisions meant that King was an important contributor to the birth of mass culture in Japan. King and other Kōdansha magazines ceased publication in the postwar period, but Kōdansha branched into other areas, including manga and music recording.

This map was printed on December 5, 1938 (Showa 13) and published on January 1, 1939 (Showa 14) as an addendum to the January 1939 issue of King. It was edited by Fuchida Tadayoshi (淵田忠良), printed by Yokota Shūji (横田秀治) and Dai Nippon Printing (大日本印刷株式会社), and distributed by Hashimoto Motomu (橋本求) and Dai Nippon Yūbenkai Kōdansha (大日本雄辯會講談社). We note two institutional holdings, one at the National Museum of Japanese History, and other at the Library of Congress. Scarce to the market.