1855 Colton Map of the World on Mercator Projection 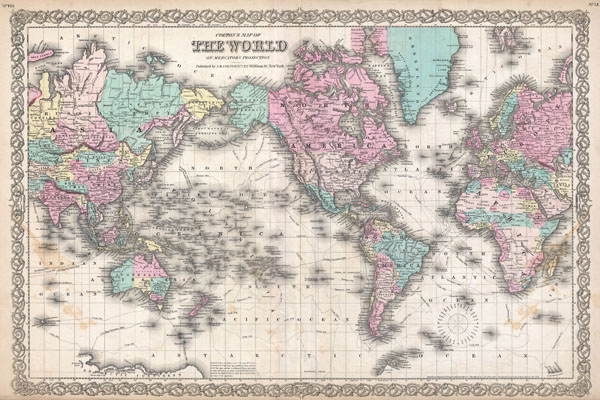 1855 Colton Map of the World on Mercator Projection

A beautiful 1855 first edition example of Colton's map of the World on a Mercator Projection. Centered on the continent of America, this map of the world is hand colored in pink, green, yellow and blue pastels. This map is a reduction and re-engraving of Colton's important 1848 wall map of the world. Colton identifies the routes taken by various important explorers including Cook, Vancouver, Vincennes, and Perouse. A notes at the bottom of the map describes the 1841 discoveries of Mt. Terror and Mt. Erebus in Antarctica by Captain Ross. Much of central Africa is marked 'Unexplored Regions.' Surrounded by Colton's typical spiral motif border. Dated and copyrighted to J. H. Colton, 1855. Published from Colton's 172 William Street Office in New York City. Issued as page nos. 8 and 9 in volume 1 of the first edition of George Washington Colton's 1855 Atlas of the World.