1850 Ensign and Thayer Wall Map of the World 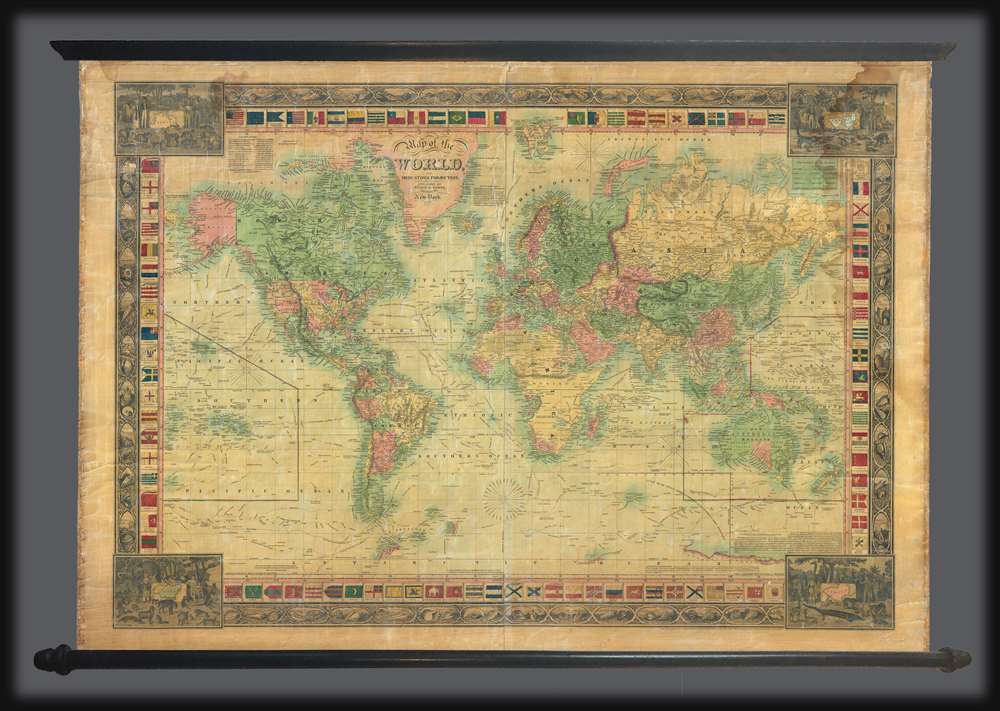 1850 Ensign and Thayer Wall Map of the World

An attractive 1850 wall map of the world by the New York firm of Ensign and Thayer. The map presents the entire world on a Mercator Projection. It is surrounded by ensigns or flags of major maritime powers as well as an unusual decorative border defined by seashell vignettes. Different countries are highlighted by color, except the United States, wherein the individual states have their own color defination. The map meticulously details the routes of important explorers, including Christopher Columbus’ first voyage John and Sebastian Cabot, Vasco de Gama, Magellan, Sir Francis Drake, Commodore Anson, Captain James Cook, Captain Jean de la Perouse, Captain George Vancouver, and the United States Exploring Expedition (U.S. Ex. Ex.). In California, the Gold Region, reflecting general interest in the 1849 California Gold Rush, is noted. Texas is illustrated according to the Compromise of 1850, thus underscoring the cartographers' meticulousness in updating their maps.

This map was first published by Phelps and Ensign in 1841. It subsequently underwent numerous updates under various 'Ensign' related partnerships, including T. and E. H. Ensign, and, as here, Ensign and Thayer. Ensign and his various partners were responsible for some of the most unusual and decorative American wall maps of the mid-19th century. While the Ensign firm was prolific, producing a wide variety of maps, his individual publications were invariably small runs and are almost universally quite scarce. This map is no exception with only two cited references in the OCLC and no record on the private market.