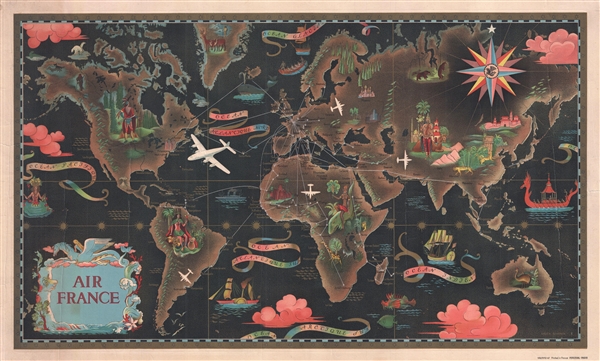 An iconic surrealist embodiment of the golden age of air travel by Lucian Boucher.

One of Lucien Boucher's more iconic surrealistic map images, this is a scarce large format edition of his 1947 pictorial map of the world showing the routes of Air France. Boucher started producing maps for Air France as early as 1933. Boucher's work for Air France is considered an embodiment of the golden age of air travel. This map, presented as a double hemisphere celestial, was drawn and published in 1947. The present example illustrates the Americas with stylized indigenous American Indians, Australia with ostriches and Asia with exotic Garuda barges, tigers, and temples.

The publisher has utilized chromolithographic printing techniques to achieve splendid rich tones throughout. This map was printed for Air France by Perceval of Paris. There is an id number in the lower right quadrant that includes the an encoded, 163/0/10-48. Loosely interpreted this means: print no. 163, P (Perceval), 10 (October) 1947. A smaller quarter sized edition was issued in 1948.