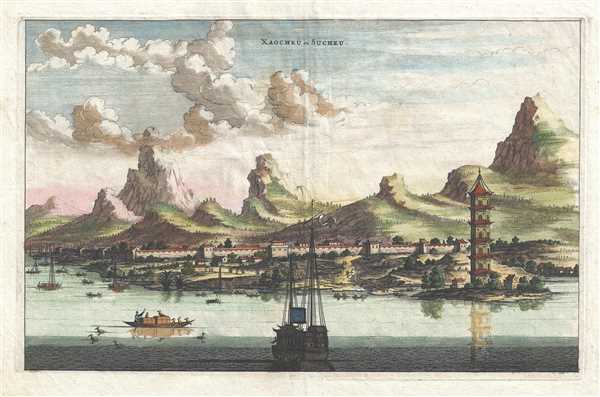 One of the earliest obtainable European views of China.

This is a hand colored c. 1670 Pieter van der Aa map or view of Suzhou, China. The map depicts Suzhou viewed from the Yangtze River. The city walls are easily distinguished, along with a tower on the banks of the river. Mountains rise behind the city. On the river, several boats are depicted. One is rather large, while the others appear to be local fishing boats. Birds encircle one of the boats in the foreground. The riverbank is peppered with trees and other vegetation, creating a very inviting scene.

Created during the final stages of the Qing conquest of the Ming, this view comes from a time of transition. The Qing were the last imperial dynasty in China, and was the second conquest dynasty to rule all of China. By 1670, the violence and civil war had ended, at least for a time. The fighting would continue until 1683, when Taiwan fell and became a part of the Qing Empire.