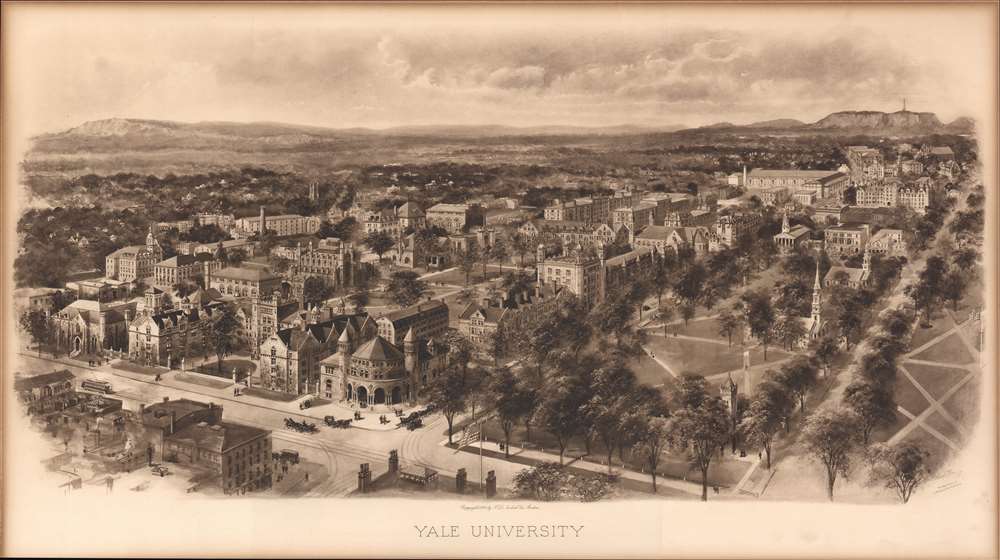 A scarce 1906 first-edition bird's-eye view of Yale University drawn by Richard Rummell and published by F. D. Nichols of Boston. This is not only Rummell's first university view, it is the first edition of such - copyrighted to Nichols and printed by Elson, thus predating Rummell's contract with Littig.

The view is centered on Osborne Hall (now demolished and replaced with Bingham Hall) with its distinctive chapel-like façade. Chapel Street runs in front of the hall and Temple Street can be seen running northward towards East Rock. Many of the extant buildings of the historic Old Campus, including Connecticut Hall (1752), are easily recognizable. Welch Hall and Lawrence Hall stand alongside College Street, across from the New Haven Green which is complete with the three chapels that still stand today: United Church on the Green (Congregational, 1814), Center Church (Congregational, 1812), and Trinity Episcopal Church on the Green (1816). In the distance the heights of East Rock, with its distinctive Soldiers and Sailors Monument, is clearly visible.

Rummell was an American landscape artist known for his drawings of American universities. In 1906, Rummell issued his first university view - an illustration of Yale. That view was a sepia tone photogravure copyrighted by F. D. Nichols of and printed by A. W. Elson, both of Boston. A view of Harvard, likely Rummell's second view, also appeared in 1906 with the same Nicholson/Elson imprint. Subsequently, Littig and Company of New York commissioned Rummell to prepare watercolors of many of the nation's most prestigious colleges. From these watercolors, copperplates were engraved, and both photogravures and lithographs were issued. The photogravures were printed on extremely fine tissue which were then adhered to thicker boards. The borders were typically highly acidic, as here, so the photogravure images have a much lower survival rate than the lithographed images, which were printed on heavier lithograph paper.

Most of Rummell's university views are strikingly similar in style, revealing the entire campus in panoramic splendor. The views are uniformly issued from an altitude of about 300 feet, suggesting that Rummell most likely worked from a balloon.

Of Rummell university views, the Yale and Harvard views are particular both in format and printing style. Unlike many Rummell university views, these early views appear in two formats, a sepia toned photogravure copyrighted by F. D. Nichols of Boston and the lithograph view issued by Littig in New York. It is likely that the photogravure is earlier, as it often lacks a title. These and other oddities suggest that the Yale view was the first university views Rummell published, and Harvard the second. Being a Brooklynite, Yale would have been one of the nearest and easiest universities to focus on as a prototype for the series. Of all Rummell's university views, it is further noteworthy that the Nichols / Elson / Rummell Yale view is one of the rarest to the market.


Alfred Walter Elson (March 20, 1859 - November 22, 1938) was an American photographer, printer, and lithographer based in Boston. Elson was born in Massachusetts, the son of German-Bavarian immigrants. Elson's father, Julius, was a jeweler. Elson operated under the imprint of A.W. Elson and Company, active from roughly 1894 to 1925. Elson is best known for his fine photogravure plates, among them many of Richard Rummell's iconic college views. Elson prints are often mis-identified as 'Welson' due to the often-weak impression of his imprint. The Elson offices were located at 146 Oliver Street, Boston. Elson died of a lingering sickness in 1938. He was survived by his wife Maud, who lived until 1955. Learn More...


Francis Durando Nichols (October 2, 1867 - February 28, 1912) was an American printer and publisher active in the early 20th century. In 1905, he founded F. D. Nichols and Company, a New York and Boston based printing house specializing in deluxe publications, catalogs, and diplomas. Prior to this time, he worked in illustration and advertising for Ginn and Company. Learn More...

Very good. Some toning and edge burn from old framing.