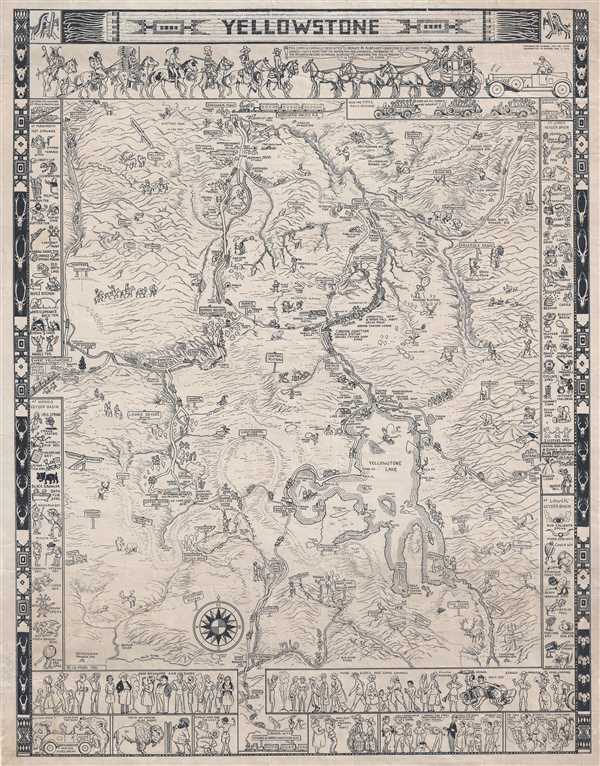 This is a scare 1935 Jo Mora pictorial map of Yellowstone National Park. The map depicts the park in detail from West Yellowstone, Montana to the east entrance to the park and from Gardiner, Montana to the park's south entrance. Signposts included throughout the map help orient the viewer, and mark Cody, Wyoming and Lander, Wyoming along the right and bottom borders, respectively, two of the closest towns to the park that had railroad stations. Some of the locations labeled within the park include the North and South Geyser Basins, Old Faithful (depicted mid-eruption), Yellowstone Lake, and the Grand Canyon of the Yellowstone. Several hotels and inns are illustrated and labeled, including the Mammoth Hot Springs Hotel, the Old Faithful Inn, and the Lake Hotel. Numerous ranger stations dot the park, along with charming drawings of bison, elk, deer, bears, moose, bighorn sheep, and other wildlife. Vignettes of tourists fascinated by the geysers, walking along the trails, fishing, or riding on horseback are also present. Illustrations of Native American are also prevalent throughout. The continental divide snakes its way through the southern part of the park, illustrated as a dotted line. Several Haynes and Hamilton stores are also labeled.

Along the left and right sides, four boxes are populated by vignettes personifying locations within the park, including Mammoth Hot Springs, the Norris Geyser Basin, the Upper Geyser Basin, and the Lower Geyser Basin. Within these boxes, individual geysers and other geologic features are illustrated in a cartoonish manner. Along the top of the map, a mural illustrates the meeting of the 'Old West' and the 'New West', depicted by Native Americans, trappers, and cowboys being confronted by a stagecoach pulled by a team of horses, and an automobile. Along the bottom, Mora has included caricatures of park visitors, 'the tourists', and how these people, so unaccustomed to life in the 'wilderness' act in the park.


Jack Ellis Haynes (1884 – 1962) and his father Frank J. Haynes (1853 – 1921) are photo historians of Yellowstone National Park. Frank Haynes was originally employed by the Northern Pacific Railroad as a photographer to photograph the route from Minnesota to the West Coast for advertisements. In 1884, Frank obtained leases on two different four-acre plots of land in Yellowstone National Park, one near Old Faithful and the other near Mammoth Hot Springs, and opened his first photo shop. Frank eventually operated photo shops at all major sites within Yellowstone Park. When Frank retired in 1916, Jack took over the photo business. Jack married Isabel Haynes in 1830 and settled with her in Bozeman, Montana. Eventually, due to his dedication to the park, Jack earned the nickname 'Mr. Yellowstone'. After his death in 1962, Isabel operated the thirteen photo shops located within Yellowstone until she sold the business to Hamilton Stores in 1967. Learn More...

Good. Backed on archival tissue for stability. Even overall toning. Reparied tears along all four sides. Blank on verso.