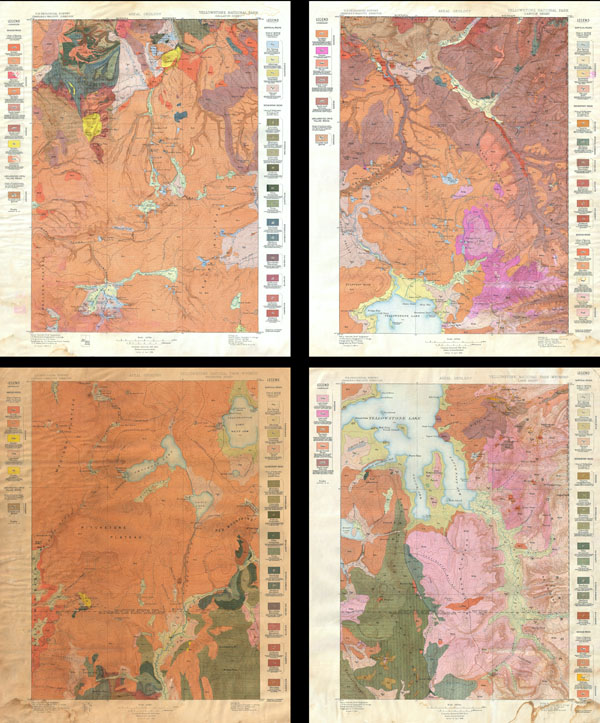 This is the rare U.S. Geological Survey of Yellowstone National Park in four sheets. Depicts the entire park in considerable detail noting topography, hot springs, rivers and creeks, marshes, geysers, lakes and ponds. Also specifically notes the Continental Divide. Shaded to illustrate different types of rock and geological zones. Divided into four sheets: the Canyon Sheet, the Lake Sheet, the Gallatin Sheet and the Shoshone sheet. Published by the U.S. Geological survey based on surveys conducted between 1884 and 1885 under Henry Gannett, Chief Geographer and J. H. Renshawe, Geographer in charge of the expedition. The topography for this map is the work of Frank Tweedy, S. A. Aaplin Jr., J. H. Renshawe and W. H. Leffingwell. Triangulation was accomplished by H. S. Chase. This is the April 1896 edition. Each sheet measures 19.5 x 15 inches.

Average condition. At some point these appear to have been exposed to water. Minor water stains (visible in photo) affect corners and some water damage is apparent on verso. Shoshone sheet is significantly browned compared to other three sheets. Because of this we are offing a significant discount on what is otherwise a 500 USD set.
Looking for a high-resolution scan of this?