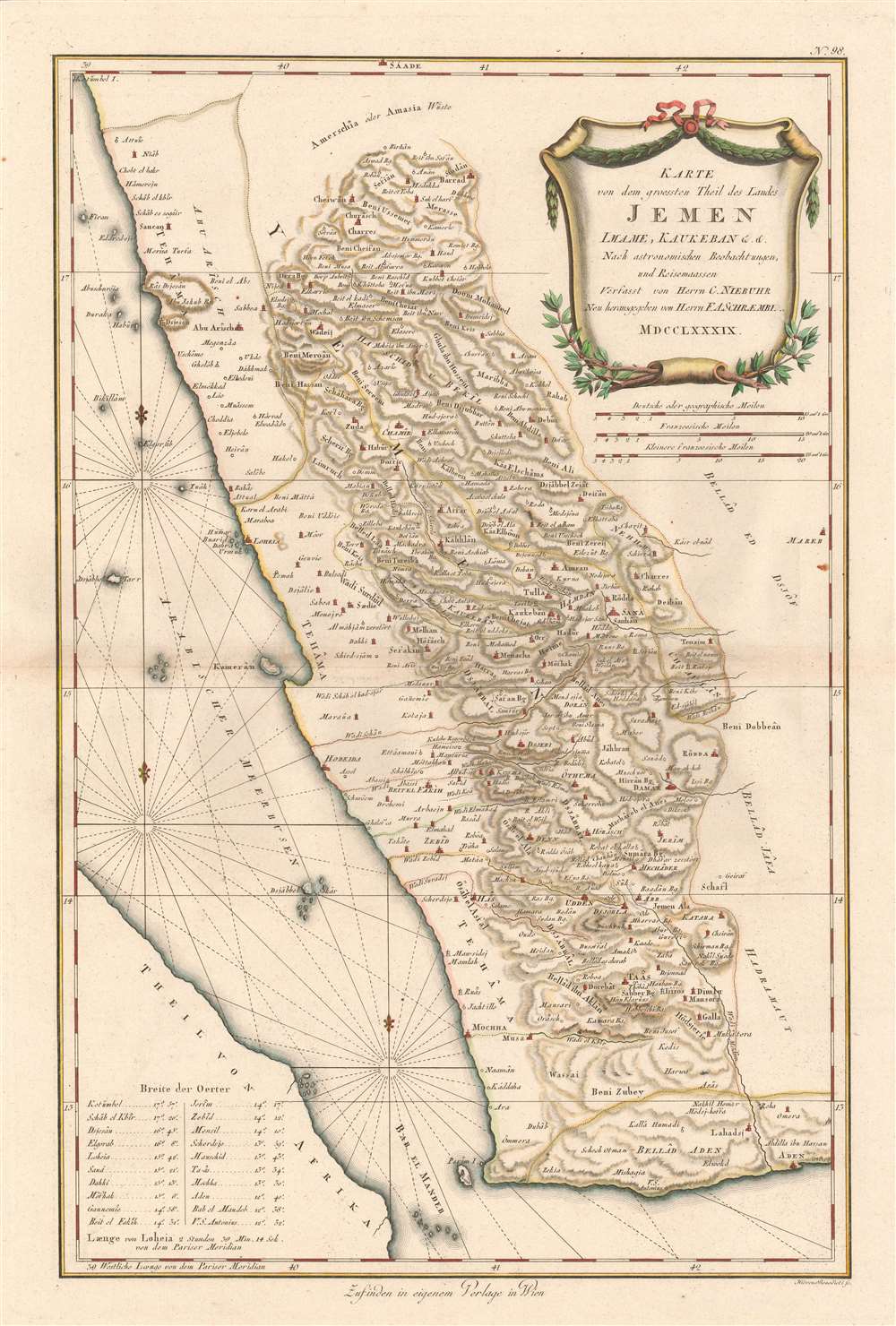 The Earliest Accurate Map of Yemen, Source of the World's Coffee
$500.00

This 1789 Franz Anton Schraembl map of the southwestern part of the Arabian Peninsula is the first printed map specifically of Yemen, and the earliest map to be based on actual exploration of this region. It is derived from data collected by the German mathematician Carsten Niebuhr, who was the sole survivor of the Danish Arabia Expedition (1761-67). The map covers what is now the western part of Yemen and the southwestern extents of Saudi Arabia. Many recognizable place names are shown with accuracy. The ports of Aden and Mocha appear, and do Al Hudaydah, Al Luhayyah, and the Red Sea islands of Kameran, Jazirat Jabel Zuqar, and Perim Island. More impressively (considering that Europeans seldom ventured further than the coast), Sana'a and Damar, Yarim and Taizz are accurately placed, along with many other towns, cities and wadis. Abu Arish, in Saudi Arabia is shown as well. The topography of the inland regions is indicated with hachures. A table in the lower left gives the precise latitude of key cities for ease in location.

The World's Most Crucial Fuel Source

The attractively-engraved cartouche is garlanded with coffee branches, alluding to Yemen's signal importance as the originator of coffee. Indeed, until the 18th century, Yemen was the world's only source of coffee cultivated for drinking. Although the plant had begun to be cultivated in Martinique and Saint-Domingue in the 1730s, Yemen still would have been cemented in the European mind as the source of the solace-bringing bean.

This map was published in Vienna by Franz Anton Schraembl for his Allgemeiner Grosser Atlas. The map is scarce. We find six listings in OCLC collections. We see seven examples that have appeared on the market since 1996.


Carsten Niebuhr (March 17, 1733 – April 26, 1815) was a German mathematician, cartographer, and explorer in the service of Denmark. Neibuhr was born in Lüdingworth (now a part of Cuxhaven, Lower Saxony) in what was then Bremen-Verden. He studied surveying and in 1757, attended the Georgia Augusta University of Göttingen, then Germany's most progressive university. Ther he studied mathematics, cartography, and navigational astronomy under Tobias Mayer (1723 - 1762), one of the premier astronomers of the 18th century. On the strength of his academics he was recommended for the Royal Danish Arabia Expedition (1761 - 1767), of which he was the sole survivor of the enterprise. (This feat appears to have been achieved by electing to eat native food, and wear native dress.) Happily, Niebuhr was able to publish extensively on the strength of his experience, issuing what is generally considered to constitute the greatest single addition to the cartography of Arabia in the 18th century. In 1806 he was promoted to Etatsrat, and in 1809 was made a Knight of the Order of the Dannebrog. Among his fans were none other than Johann Wolfgang von Goethe (1749 - 1832), who, writing to Neibuhr's son Barthold Georg Niebuhr, said, 'You carry a name which I have learned to honor since my youth.' Learn More...