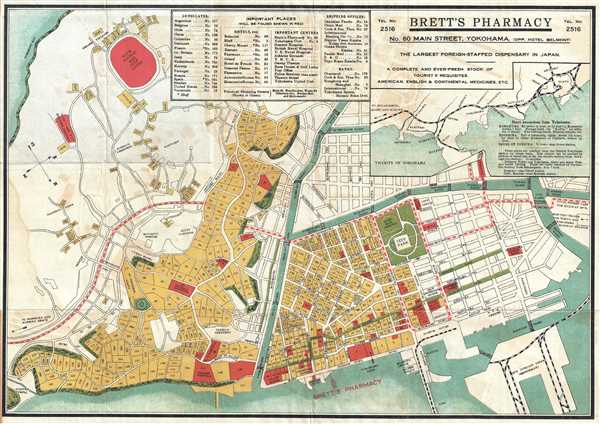 This is a c. 1920 Brett's Pharmacy English language map of Yokohama, Japan. The map depicts Yokohama from Mississippi Bay to the harbor and from Negishi Villages to the bay. Highly detailed, nearly every block in downtown Yokohama is numbered, with 54 locations identified by name in a table of important places located along the top border. Those locations are colored red, seventeen of which are consulates. Each of the bridges are labeled, along with some of the streets. Brett's Pharmacy, which specialized in ‘American, English, and French medicines, perfumes, and toilet requisites suited to the needs of travelers’ is labeled in bright red ink with an arrow pointing to its location. An inset map of the region, from Tokyo to outside Fujisawa, sits in the upper right corner, just below the advertisement for Brett's Pharmacy.

At the time of this map's publication, Yokohama was the most international city in Japan. This map was evidently created to cater to American and European travelers visiting the city. By distributing these maps, Brett's Pharmacy, 'compliments of Brett's Pharmacy,' goodwill was created among the Western tourists, and inevitably led to customers in need of assistance.

This map was produced by Brett's Pharmacy c. 1920 for distribution in Yokohama.

Very good. Verso repair of fold separation. Attached to original binder. Blank on verso.
Looking for a high-resolution scan of this?