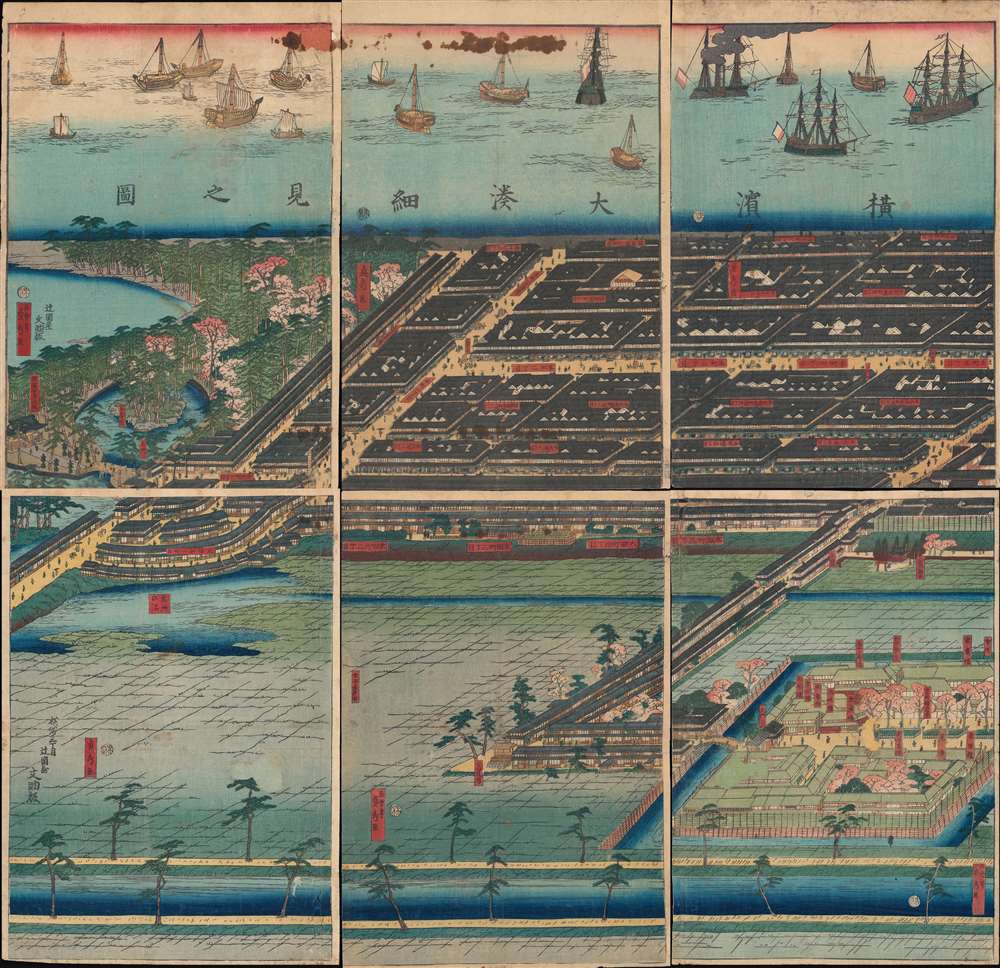 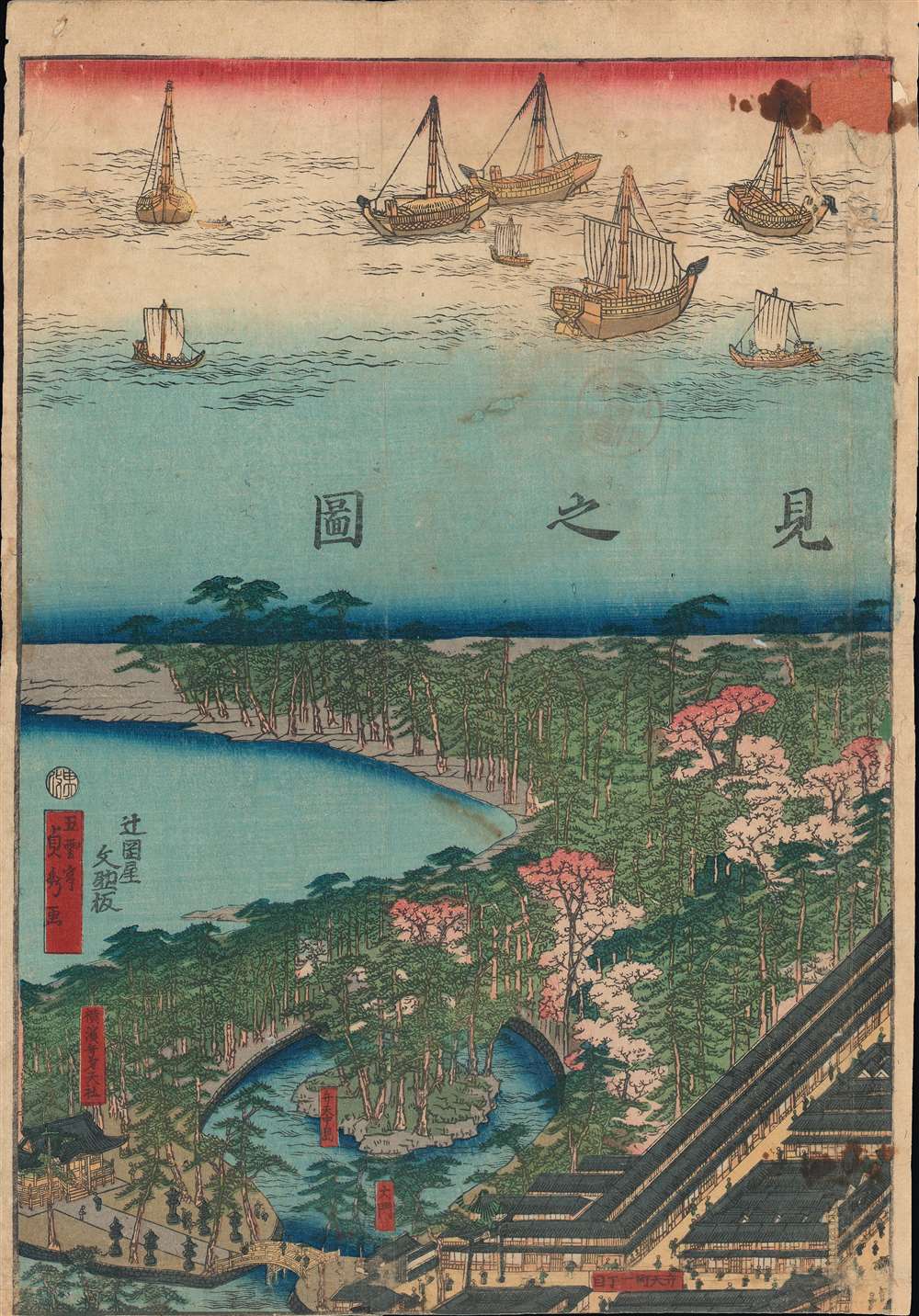 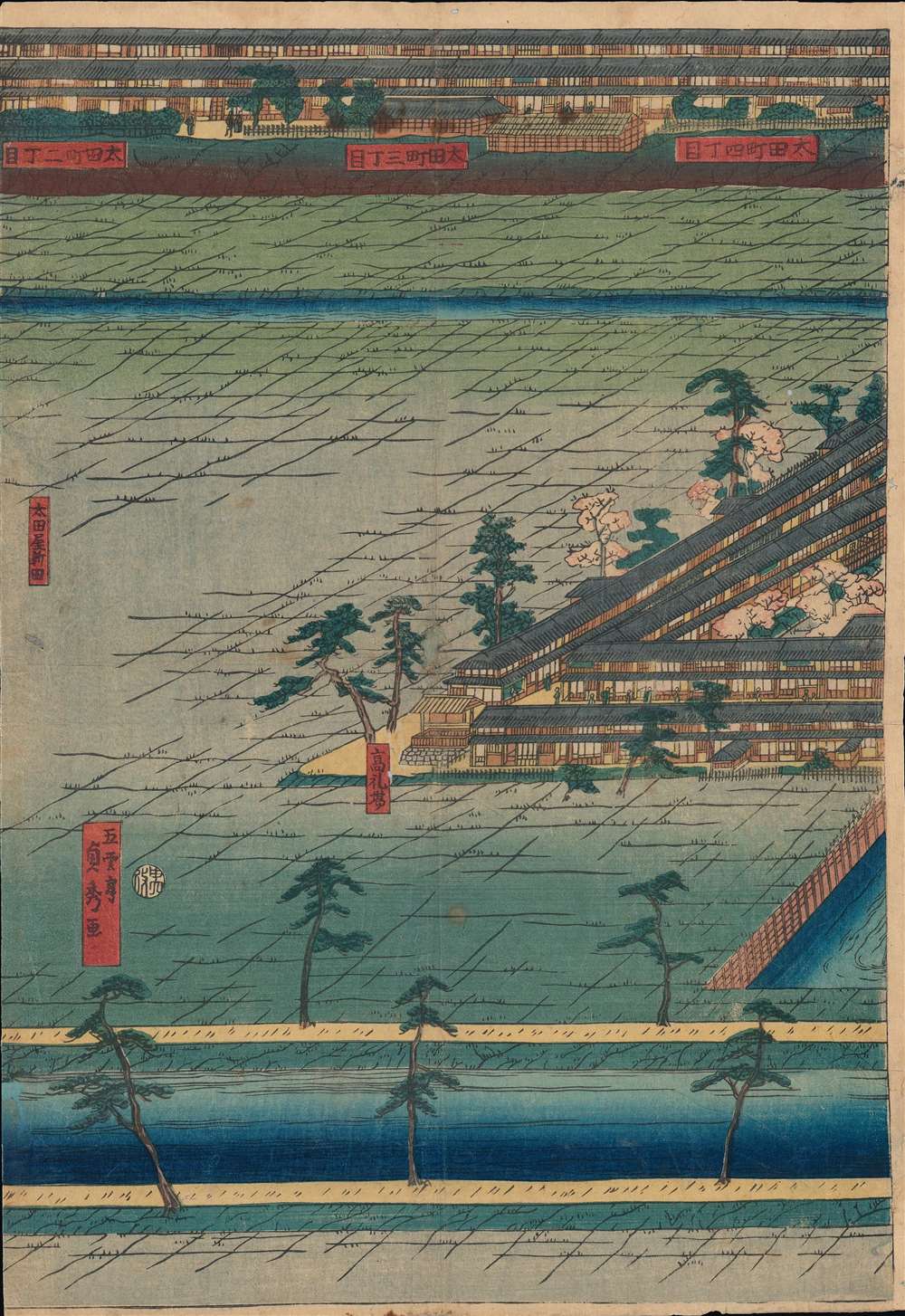 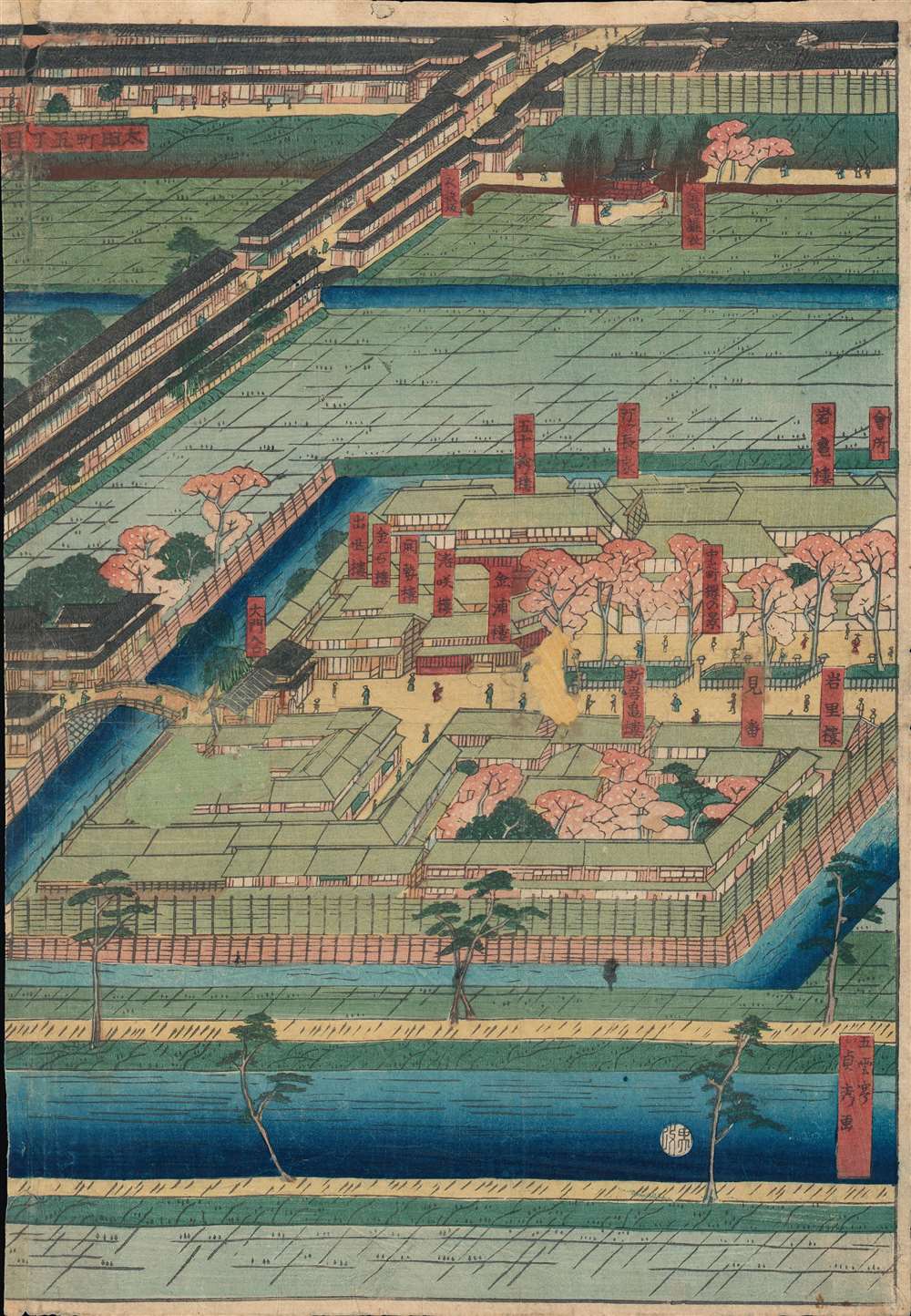 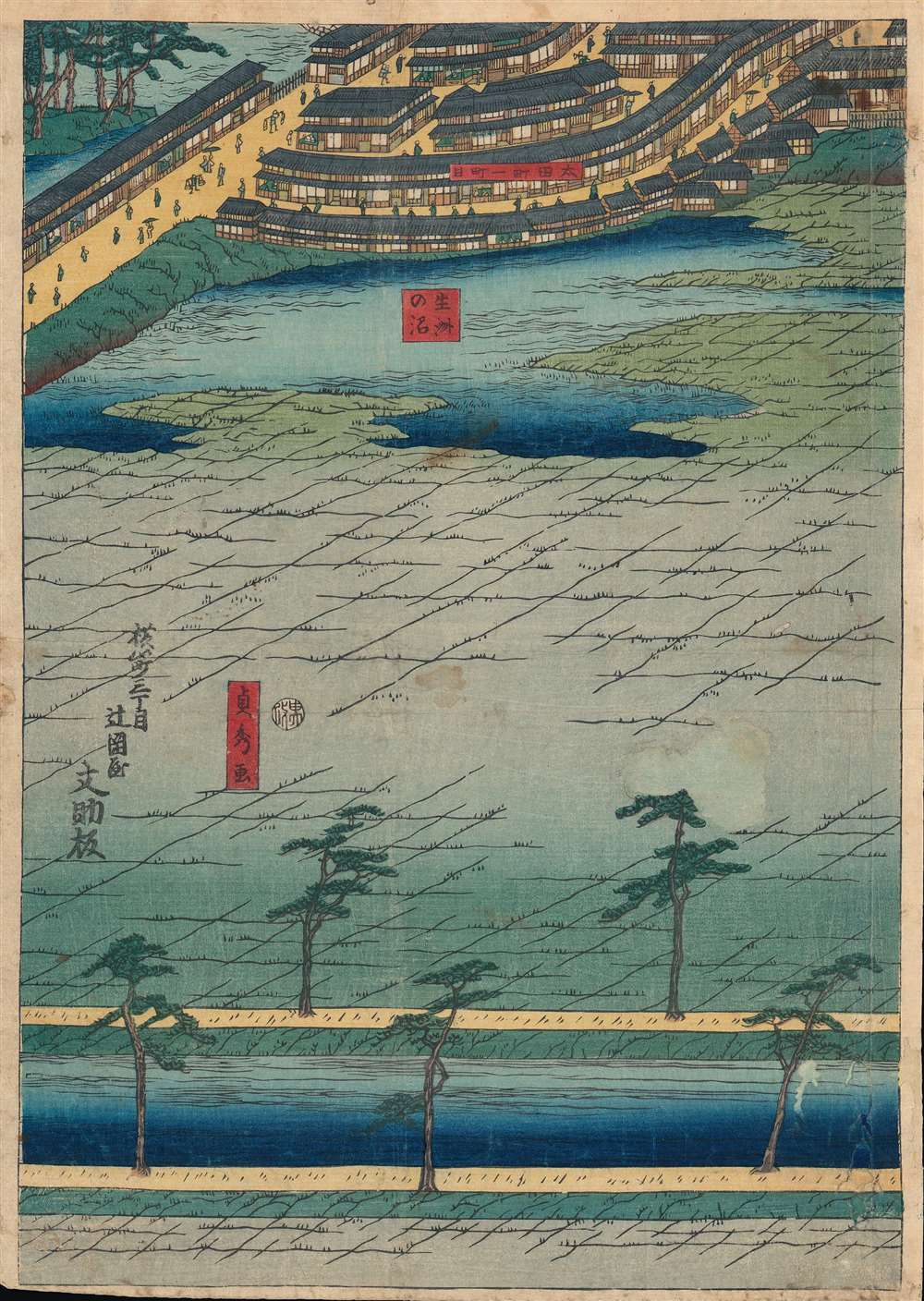 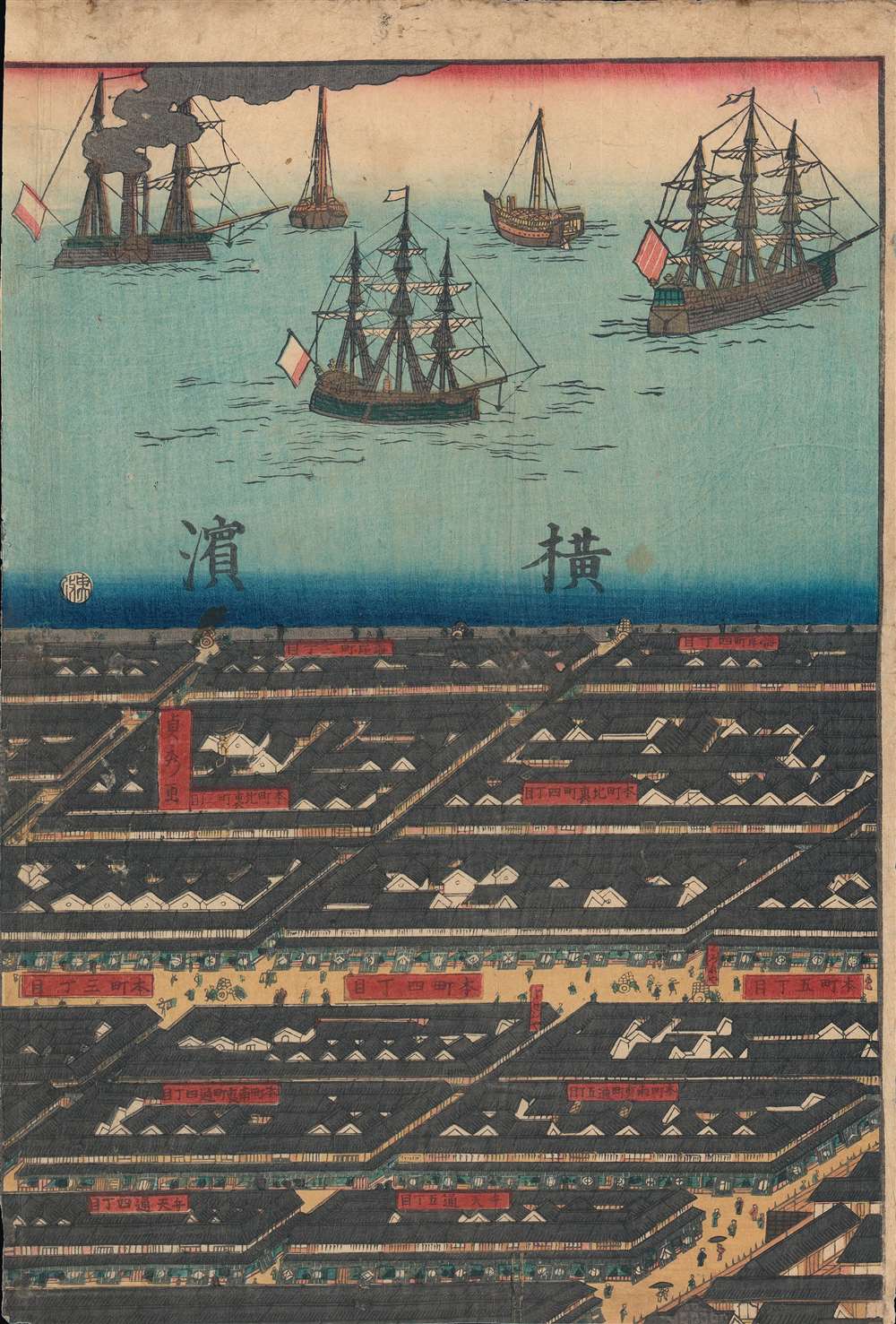 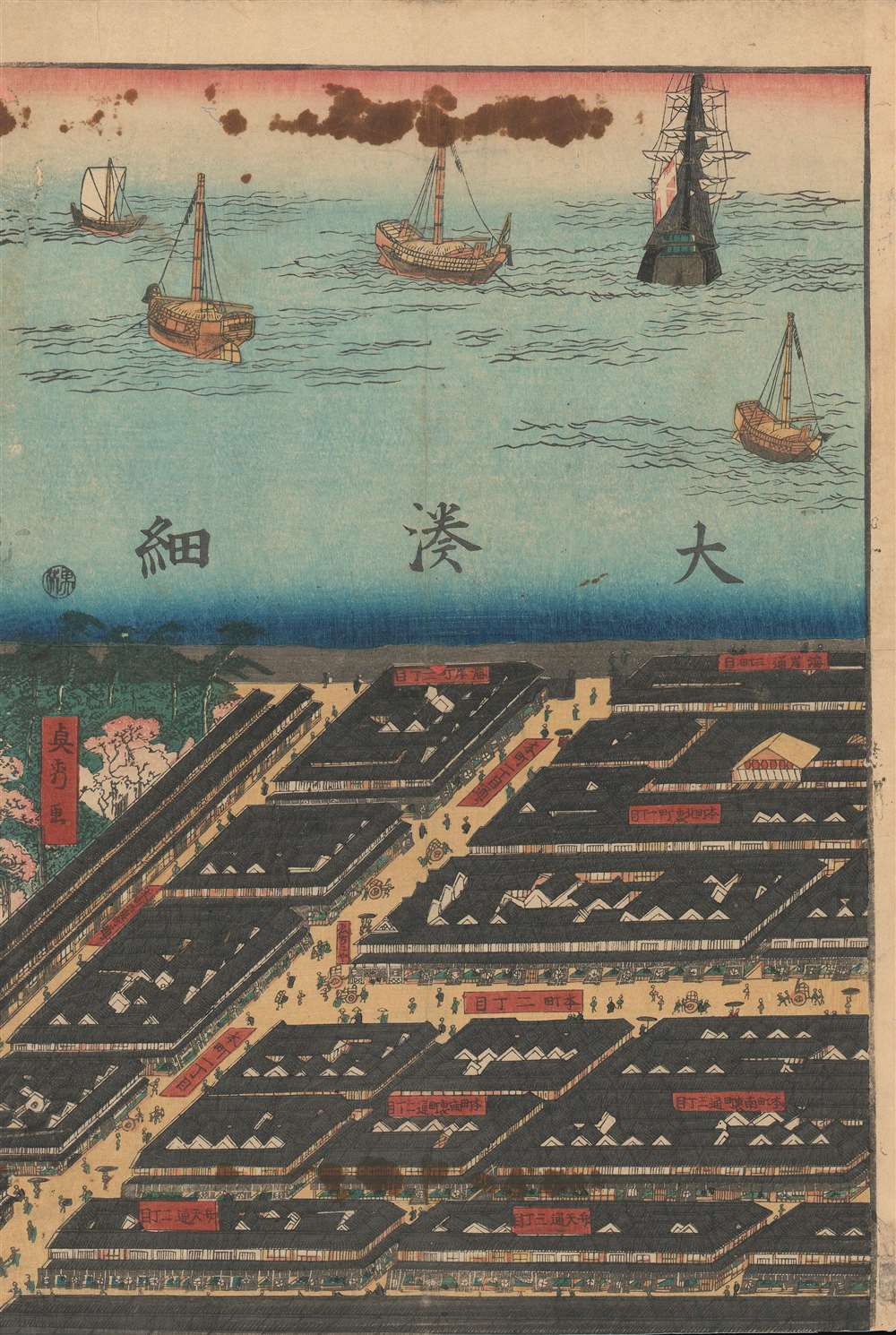 This is a masterful c. 1860 six-panel composite view of Yokohama produced by Sadahide (貞秀), one of the great ukiyo-e artists of the late Edo period and early Meiji. The view depicts Yokohama shortly following its opening to foreign trade, a development that would have dramatic consequences for both Yokohama and Japan.

This view is composed of six standard sized ukiyo-e sheets that combine to form a large view of Yokohama. The view is oriented towards the northeast, illustrating the bustling town just after its opening as a treaty port. The distinctive foreign quarters, built around factories (warehouses) of traders from various nations, had not yet taken shape. Nonetheless, the foreign presence is already apparent in the ships anchored in the harbor, and in the collection of structures at bottom-right connected by a walkway with the main settlement. This was the Miyozaki Quarter (港崎遊廓), a pleasure (prostitution) quarter for foreign traders that burned in the fire of 1866. Afterwards, the pleasure quarter relocated, and the Miyozaki Quarter was reconstructed as Yokohama Park, which it remains today. Some remnants of the pleasure quarter, such as stone lanterns, that survived the fire are still present.

As Yokohama suffered several large fires over the years, including as a result of the 1923 Great Kanto Earthquake and American firebombing during World War II, little of the original treaty port remains. Therefore, many of the buildings built in a European or hybrid architectural style, such as the Port Opening Memorial Hall, the Red Brick Warehouse (a former customs house), and the Kanagawa Prefectural Museum of Cultural History, date from the late 19th and early 20th century and have required reconstruction.

At left is a temple dating to the 12th or 13th century that was dedicated to Benzaiten (弁才天), a fascinating deity characteristic of Japan's syncretic religious context, who served as the town's protector. This complex did not survive the fires and upheavals over Yokohama's modern history, nor the state's control and reformulation of Shinto as a state religion in the Meiji Era. However, a small shrine related to the one illustrated here exists today further to the east on the Motomachi Shopping Street (元町商店街). In the years after this map's publication, an equestrian field and a school for English were built near the Benzaiten temple, reflecting the growing foreign influence in Yokohama. Today, this area is home to Yokohama City Hall and Sakuragichō Station.

Yokohama – Japan's Gateway to the Outside World

Sadahide is most closely associated with Yokohama-e (橫濱繪), a ukiyo-e genre which he largely defined, depicting foreigners and the cultural interactions between Japan and the outside world. Although Japan had reluctantly signed a 'Treaty of Peace and Amity' with the United States in 1854, opening the door for greater foreign presence and influence, the terms were quite vague until a subsequent treaty, the Treaty of Amity and Commerce (also known as the Harris Treaty), signed in 1858, opened Japanese ports to foreign trade. Other foreign powers piled into Japan to sign similar treaties stipulating rights for their nationals to trade and reside in certain ports. The most important of these 'treaty ports' were Nagasaki and Yokohama, the former having been a major port for centuries, the latter much less so.

The foreign powers demanded a port near Edo (Tokyo), understanding that the capital itself was not an option. Yokohama was primarily chosen because the most obvious choice, Kanagawa-juku (神奈川宿), a nearby coastal station on the Tōkaidō, was opposed by the Shogun. Much like Shanghai in China, Yokohama grew rapidly and became the main conduit for the exchange of people, goods, and ideas between Japan and the outside world.

Artists, Sadahide chief among them, rushed to depict the new visitors, who were regarded with both curiosity and revulsion, but in either case were an object of keen interest throughout Japan. Aside from Western traders, Chinese merchants and workers also resided in Yokohama, establishing an important Chinese community, still the largest Chinatown in Japan.

As the city itself was a product of the treaty port system, Yokohama was quick to embrace foreign technology, and Japan's first major rail line was opened from Yokohama to Edo (by then renamed Tokyo) in 1872. Eventually, Yokohama would grow to swallow up Kanagawa-juku and other nearby towns, becoming the capital of Kanagawa Prefecture and the second largest city in Japan.

This view was engraved by Sadahide, whose signature is present on each individual sheet (as either 貞秀 or 五雲亭貞秀), and published by Tsujiokaya Bunsuke (辻岡屋文助) in Edo. It is dated to the first year of the Man'en reign (万延元), that is, 1860. This view is cataloged among the holdings of three institutions, Waseda University, the Agency for Cultural Affairs (Japan), and Ritsumeikan University, and is very scarce to the market.

Sadahide Hashimoto (橋本貞秀; ハシモト, サダヒデ; 1807 - 1878), also known as Gountei Sadahide (五雲亭貞秀) and Hashimoto Gyokuran (橋本玉蘭), was a Japanese artist active in Yokohama in the second half of the 19th century. He was born in Chiba Prefecture. Hashimoto is best known for his renderings of foreigners, in particular Western peoples and customs, as observed while living in the open port of Yokohama. He is considered to be a disciple of Takako Kunisada, another artist of the Toyokuni Utagawa school, earning him the name Utagawa Sadahide (歌川貞秀). Hashimoto met Kunisada in 1826, when he was 14 years old and most of his early work reflects the work of Kunisada. Even before the Bankumatsu period, Sadahide took an interest in distant and foreign lands, publishing an important and controversial account of the First Opium War between Britain and Qing China (Kaigai Shinwa, 海外新話) with the scholar Mineta Fūkō (嶺田楓江). Following the 'opening of Japan' in 1853, he produced a series of prints of Ainu people in Kita Ezo zusetsu (北蝦夷図説) as well as a world map that was likely based on a Dutch original (https://www.geographicus.com/P/AntiqueMap/world-mineta-1853), also with Mineta. He developed an interest in geography and began issuing maps and bird's-eye views, some quite large over multiple panels, of Japanese cities. At the very end of the Tokugawa period, he moved to Nagasaki and was selected as part of a Japanese delegation to the International Exposition of 1867. Sadahide died about a decade later, living long enough to see the rapid transofrmation of Japan following the Meiji Restoration. He was a mentor to Hideki Utagawa. Learn More...


Tsujiokaya Bunsuke (辻岡屋文助; fl. c. 1852 - 1882) was a prominent Japanese published based in Edo (later Tokyo) that specialized in the production of Nishiki-e (錦絵), a technique in which different blocks were carved for each color applied to a sheet, resulting in a much richer and sharper prints than hand coloring. Tsujiokaya Bunsuke worked with many of the leading figures of the Utagawa school in the mid-19th century, including Sadahide (貞秀). Learn More...

Good. Spots of discoloration near top margin of composite. Some fraying on edges of individual sheets. Sporadic but minor points of wear and discoloration.

Waseda University Library, ル11 00971.
Looking for a high-resolution scan of this?