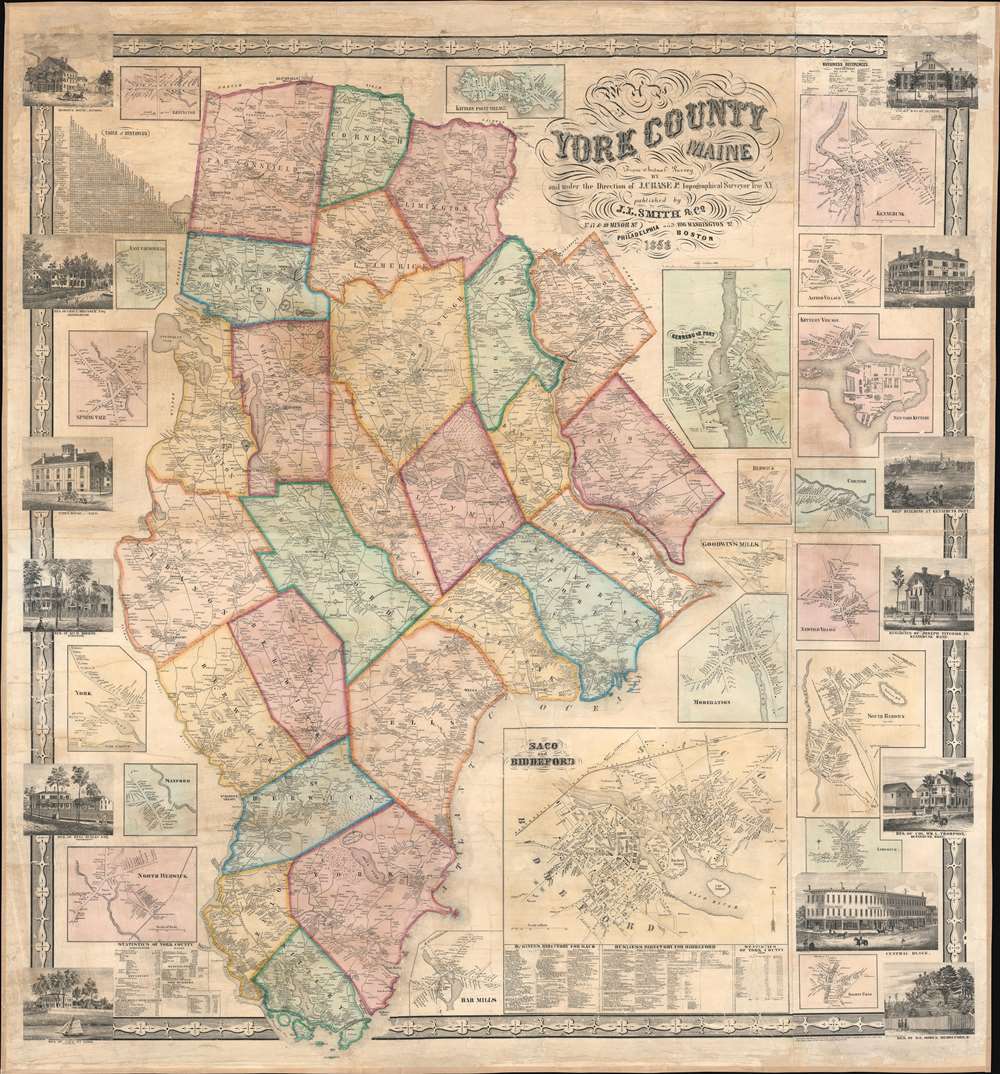 An impressive 1856 J. Chase Jr. wall map of York County, Maine. Townships are shaded and color coded with Individual homesteads identified throughout. Twenty-one insets of York County towns appear along all four sides. Among these are Kennebunk, Kennebunkport, Moderation, York, East Parsonfield, Saco and Biddeford, and Kittery. Thirteen views of residences and businesses are also included, among them Court House in Alfred; ship building at Kennebunkport; the residence of Joseph Titcomb in Kennebunk; the residence of Benjamin Dudley, Esq. in Kennebunkport; and the Saco Town House.

This map was created by J. Chase Jr., published by J. L. Smith and Company, and copyrighted by Robert Pearsall Smith in 1856. Two examples are cataloged in OCLC and are part of the collections at the Library of Congress and the University of Maine at Orono.

Robert Pearsall Smith (February 1, 1827 - April 17, 1898) was an American map maker active in Philadelphia from the middle to late 19th century. Smith was born to a Quaker family in Philadelphia, all librarians and publishers. Robert Pearsall originally ran a law bookstore at 19 James Street, Philadelphia. It was not until 1846 that Smith began producing maps in collaboration with this father, John Jay Smith, and brother, Lloyd P. Smith. One year earlier, in 1845, John Jay, then librarian at the Library Company of Philadelphia and Loganian Library, acquired the American rights to the anastatic process of transfer lithography. In February of 1846 he and his two sons founded the Anastatic Office, a printing concern based on the anastatic process located at 317 Market Street, Philadelphia. The Anastatic Office produced numerous copies and reissues of historic documents and maps from the Library Company's collection before being dissolved in 1847. In the same year Robert Pearsall opened a printing establishment under his own name at 144 Chestnut Street. Smith was also deeply religious, a lay leader in the Holiness Movement in the United States and the Higher Life Movement in Great Britain. Smith and his wife, Hannah Tatum Whitall, first crossed the Atlantic to preach in England, Germany and Switzerland in 1873. They returned in 1875, preaching in Brighton, where Smith supposedly had an affair with an American writer. In, 1888, his entire family moved to England. Learn More...