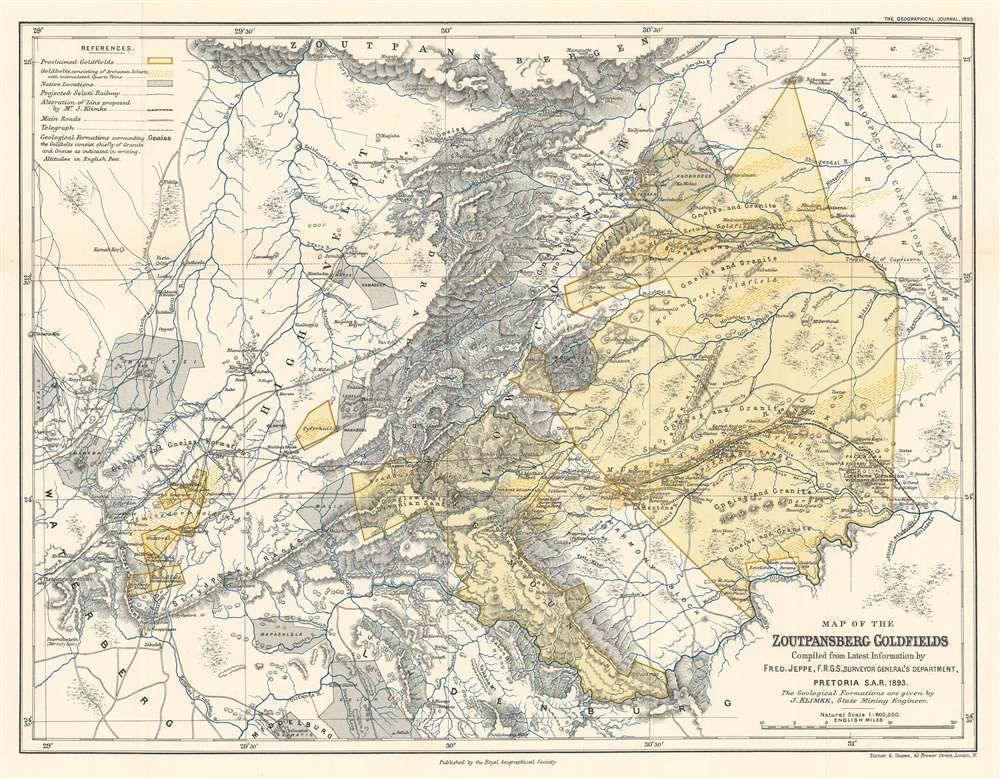 This is an 1893 Friedrich Jeppe map of the Zoutpansberg Goldfields in northeastern South Africa, what was then the South African Republic. Per Jeppe, Zoutpansberg, a district in the northern portion of the South African Republic, covered about 25,000 square miles. Here, the proclaimed gold fields are highlighted in yellow, with the known gold belts further emphasized by yellow dashes within these yellow sections. The gray areas mark lands set aside for native Africans that were administered by the tribes. Gold and other mineral deposits were known to exist in some of these areas, and certain tribes allowed for mining and prospecting rights on their land. Settlements are identified, all of which, per Jeppe, are connected by telegraph and roads.

Gold was first discovered in the region in 1854, but, due to the policy that publicizing a gold find would be punished by a £500 fine, the discovery wasn’t truly made known until 1870, when the independent discoveries of Mauch and Edward Button were published. Throughout the 1870s, 80s, and 90s, gold claims were officially sanctioned by the government, with a great boom in gold arriving in 1888-89.

Friedrich Heinrich Jeppe (July 25, 1834 - July 17, 1898) was a German publisher, spy, and mapmaker active in South Africa during the second half of the 19th century. Jeppe was born in Rostock, Germany and relocated to South Africa with his two brothers in 1861. Although initial merchants, F. H. Jeppe took a position as postmaster in Potchefstrom, and later, became Postmaster-General of the Transvaal Republic, a position he maintained until 1875 - when he lost his appointment to political maneuvering. Jeppe published numerous important large-format maps of the Transvaal and South Africa from about 1867 onwards. He also published the Transvaal Almanac and Directory from about 1877 onwards. Also in that year, 1877, he was commissioned as Government Translator and Controller of Statistics in the office of the Colonial Secretary. Eventually he obtained the position of Chief Draughtsman in the Department of the Surveyor-General. There is considerable evidence to suggest that Jeppe was a British agent that actively channelled cartographic information to British authorities until the time of his death. Jeppe became ill with liver disease early in 1898 and died in Pretoria on July 17 of 1898 (interred at the Old Cemetery, Pretoria.) On the eve of his death, he was still actively working on his most ambitious map, and his final missive to friend and government official Johann Rissik, requested assistance to his son, Carlos Friedrich Wilhelm (Charles) Jeppe (1870 - 1900), in publishing the completed map. The massive 6-sheet map was finally published in 1899 - just in time for the Second Boer War (1899 - 1902). Although published posthumously, Jeppe's 1899 Map of the Transvaal or S.A. Republic. The maps was used by both sides during the war and proved one of the finest and most important maps of South Africa ever published. Learn More...