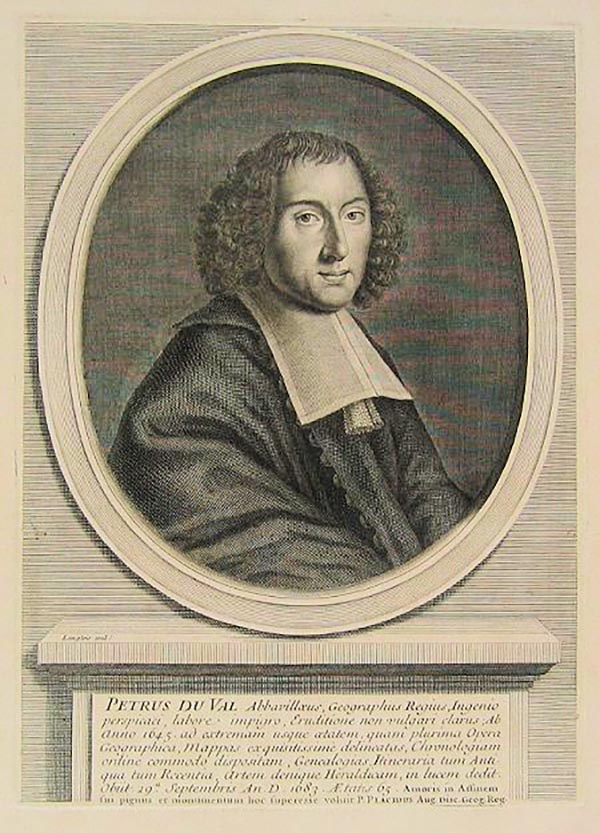 Pierre Du Val (May 19, 1619 - September 29, 1683) was a French cartographer and publisher active in Paris during the middle part of the 17th century. He was born Abbeville, Picardie, France, where his father, also Pierre, was a merchant, consul, and alderman. His mother was Marie Sanson, sister of Nicolas Sanson d'Abbeville (1600-1667), the leading French cartographer of his day. Du Val and probably apprenticed in Sanson's workshops. Afterwards, in Paris, he studied geography under Jean-Baptiste Gault, who later became the Bishop of Marseilles. He counseled M. Henri of Savoye, abbot of St. Sorlin, and M. Gilles Bouraut, bishop of Aire and later Evreux, in matters of science and geography. Du Val became Geographe ordinaire to Louis XIV in 1650. His first atlas, the 1654 Cartes Geographiques Methodiquement Divisees, contained few of his own maps and was mostly compiled from reissues of maps by other cartographers. His early work focused on atlases and geographical treatises, but later, he turned his attentions to large separate issue, often multi-sheet maps. After his death in 1683, his widow, Marie Desmaretz, continued his business at least until 1684, after which it passed to his daughters (either Marie-Angelique or Michelle), who published until at least 1688. He is the elder brother of Placide de Sainte Hélène (1648 - 1734), Placidium Augustinum, an Augustine monk and geographer.