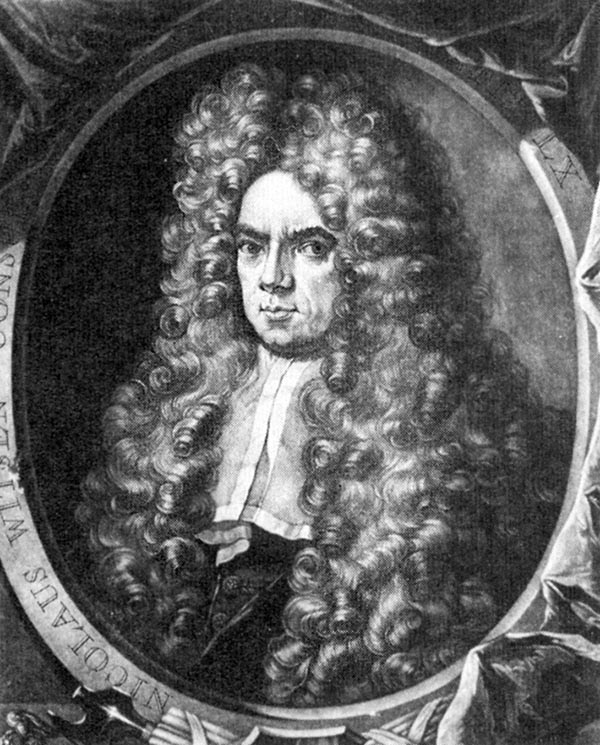 Nicolaes Witsen (May 8, 1641 - August 10, 1717) was a Dutch cartographer, diplomat, writer, businessman, and politician. Witsen was born in Amsterdam to the politically powerful Cornelius Jan Witsen, burgomaster, head bailiff and administrator of the Dutch West India Company. Witsen studied Law at the University of Leiden where he developed an interest in language and maps. He was highly educated and traveled in elite circle, befriending Oliver Cromwell, Andrew Vinius, Cosimo III de'Medici, Melchisédech Thévenot, and others. In 1662 he presented a paper at the Amsterdam Athenaeum Illustre arguing for the effect of comets on earthly life. Witsen joined the VOC (Dutch East India Company) became an expert on shipbuilding, composing several treatises on the subject. His passion, however, remained cartography, particularly the cartography of Asia. Having traveled in embassy to Russia, Witsen contrived to get special access to Russian records on the exploration of Siberia, including the heretofore unknown explorations of Semyon Dezhnev. He also acquired the diary of Maarten Gerritsz Vries, who had explored the coast of Sakhalin in 1643. The Vries diary was thereafter lost. This information he compiled into several influential maps and books on Asia which were extensively copied. One result of this work is the Witsen Peninsula - a narrow outcropping of land extending from Siberia that appears on many maps of the early 17th century. Later, Witsen became Mayor of Amsterdam, a position he held some 13 times, and under whose tenure arts flourished. Witsen died in Amsterdam and was buried near his country home in Egmond aan den Hoef.