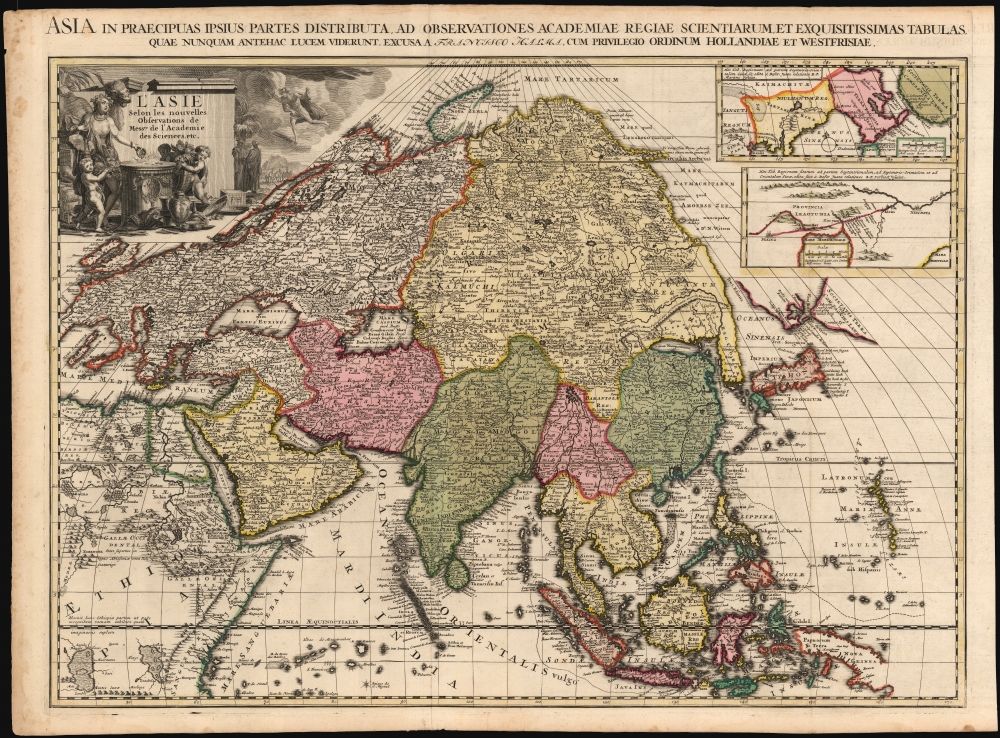 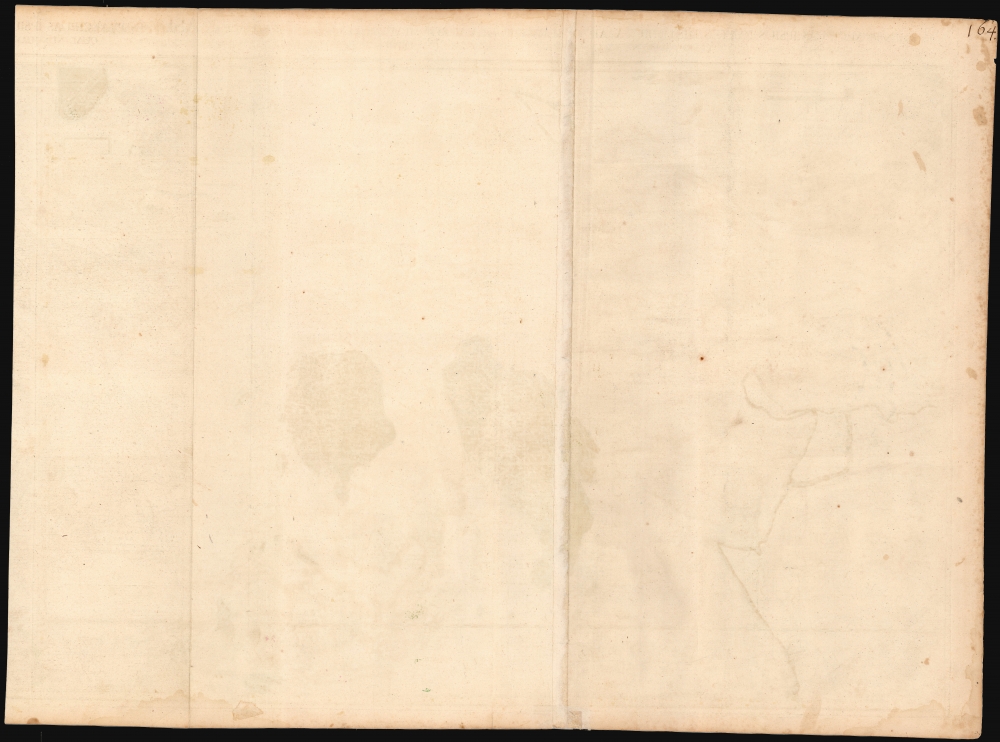 This is the rare first state of François Halma's c. 1699 separately-issued map of Asia. Its unusually large folio size, bold and sophisticated engraving, and rich original color sets this map apart as one of the most beautiful late-seventeenth century maps of the continent. It dramatically presents some of the most notable geographic innovations of its era, including early theories of the nature of the strait separating Asia and America, the growing European understanding of Siberian geography, and developments in the continued European confusion regarding the nature of Korea, Japan, and the eastern coasts of Asia. Although not its primary focus, the map also shows a key development in the understanding of African geography: the placement of Lake Tana as the source of the Blue Nile, and the separation of the River Nile from Lakes Zaire and Zaflan - which since Ptolemy had been assumed to be the source of the great river.

The overwhelming weight of Halma's geographical information is drawn from Nicolas De Fer's monumental Asie, divisee selon l'etendue de ses principales parties, a 1696 wall map of the continent engraved in Paris. De Fer's distinctive presentation of the Indian subcontinent, the Caspian Sea, and his reliance upon Nicolaes Witsen's groundbreaking Siberian geography are all presented here. Two inset maps in the upper right, showing alternative theories of northeast Chinese and Siberian geography are based on the Jesuit reports of Martini and Verbiest, are also copied (in reduced and simplified form) from the De Fer.

Japan, Korea and the Company Islands

Halma diverges sharply from De Fer in his treatment of the Far East from the Equator to the 55th parallel north: Japan, Korea and the region later be identified as the Kuril islands. The De Fer wall map shows a peninsular Korea, and extends the coastline from Korea sharply to the east-north-east, accompanied with the note that 'all this coast as well as Japan are drawn from Portuguese maps very different from ours.' De Fer's map shows a peculiarly elongated Japan with an island of 'Ieso' roughly corresponding with Hokkaido. Halma replaces all of this: in lieu of the long, speculative coastline with a tentative depiction of a Terra de Yesso, Staten Island (Kunashir), and Compagnies Land (Iturup). Yesso, here a proto-Sakhalin Island, was often shown as a peninsula attached to mainland Asia, but here is depicted as an incomplete island separated from Asia by a 'Fret. Esoni' (Strait of Yesso.) Yesso is separated from the inflated Compagnies Land by Staten Island, and the Strait of De Vries. The first inset in the upper right shows this same region, but depicting Yesso in its more conventional peninsular form. De Fer himself appears to have been uncertain enough of his own geography to provide the inset.

Halma's Japan appears to draw partially from De Fer's toponomy - the place names 'Osacco,' 'Tanura,' and 'Yuoqui' appear on both maps. The shape of the Japanese islands here does not resemble De Fer's, however; it is possible that it may be a throwback to Blaeu's Japan, at least in terms of the eastern coastline. Taken as a whole, Halma's presentation of this area appears to be a unique amalgam of sources.

A State of the Art Siberia

The whole of the Asian Northeast -everything extending north and east from the Caspian Sea - is here derived from the 1690 map of Nicolaes Witsen, the first European with access to Russian sources for these remote regions. It is perhaps the paucity of data Witsen provides for the Pacific Coast south of the 50th parallel, that encourages the broad speculation on the present map.

The Ptolemaic Lakes of Africa

Like most maps of the 17th century, the maps of the Sanson-Du Val lineage present the two great lakes of Zaire and Zaflan as the sources of the River Nile, a geographical assumption reaching back to Ptolemy. Pierre Du Val's 1678 4-sheet map of the continent is the first to diverge from this trope, showing instead Lake Tana as the source of the Blue Nile, and disassociating Lakes Zaire and Zaflan completely from the Nile. This correction was far from universally adopted by contemporaries. The handful who did included De Fer, whose 1696 wall map of Asia provided the basis for the bulk of the present map.

The title cartouche is inscribed on a great stone wall, before which is an altar whereon a female representation of Asia pours incense on a burning offering, while a camel peers over her shoulder. Putti wrangle great bundles of spice to the altar. Painted jars and piles of silks. are strewn about; a crate bears Halma's 'FH' initials. Against a mountainous background a caravan can be dimly seen, whilst Hermes - the Greek god of communication, and commerce - hovers over all.

The map was printed by François Halma, probably after 1699. It was masterfully composed by Jan Goeree, and superbly engraved by the unjustly obscure J. Baptiste. Halma produced no full-size atlas of his own, but this map was accompanied by similarly grand maps of Africa, America, and Europe, and likely Halma's 1696 north polar projection world after Cassini. Before 1713, the plates were acquired by Leiden map publisher Pieter van der Aa, who replaced Halma's imprints with his own and included the maps in his 1713 Le Nouveau Théâtre du Monde. Halma's separately issued maps, destined for decorative use or tipping into composite atlases by other publishers, have survived in only a few examples. We are aware of only one other example of this edition of this map coming to the market, and there is but a single example cataloged in OCLC, tipped into a Visscher atlas now held by the Newberry Library.

Very good. Mend at bottom of centerfold, few marginal mends away from printed image, else excellent with a bold strike, attendant to the youth of the plate. Superb original color.